What Does the Pew Survey Say About Indian Muslim Attitudes?

Believers in diversity, they need to move ahead and embrace pluralism.

·         Nearly 80% Muslims report that they will stop their girls from marrying outside the community.

·         Roughly 70% Muslims would actively stop a fellow Muslim from marrying outside his or her caste.

The recently released Pew Research Center Survey titled ‘Religion in India: Tolerance and Segregation’ has raised may debates regarding the nature of social and religious life in the country. In many ways, the survey is one of its kind for India, where social and religious data in terms of attitudes is hard to come by. While arguably one of the most religiously diverse countries in the world, India does not have a tradition of collecting such data due to which we hardly know how religious and social attitudes in the country have changed over time. One of the important reasons for this has been the acquired aversion towards anything religious which the Left promoted while they were busy making policies for this country. Now when religion seemingly confronts the received wisdom of secularism in this country, many who did not pay any attention to it are completely at sea. 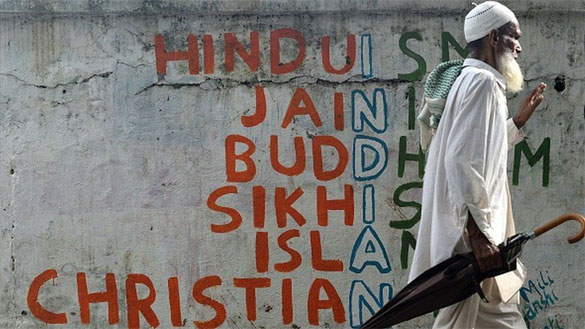 Hindus make up 80% of India's population

There are many aspects in the Pew report that needs to be discussed and some of them have been discussed. However, aspects of the report, which specifically discuss Muslim religious and social life, has hardly received the attention that it deserves. Part of the reason why this is so may be because it throws up inconvenient facts about the Muslim community which many, in their political correctness, do not want to talk about.

The larger picture that emerges from the survey can be succinctly put as ‘Living Together Separately’, to borrow a title from the late Mushirul Hasan’s book. The survey does point that majority of Indians are tolerant but it also tells us that they do not want to mix with each other. For example, although they all express respect for other religious traditions yet they would not like to have a neighbor from other religion. This preference for one’s own has resulted in religious enclaves even within metropolitan centers like Mumbai and Delhi. We are told that Muslims, in particular, have huge problems in finding accommodation in Hindu localities which leads to their ‘ghettoization’. But then, the survey reminds us that Muslims too prefer to live amongst their own which complicates the picture of ghettoization a little bit. 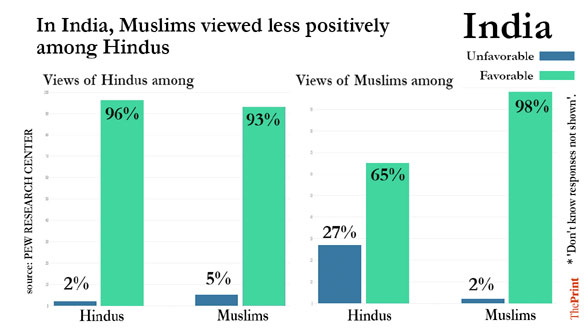 The tolerance exhibited in the survey therefore can be read in other ways too. One way to read this is to understand that tolerance is not necessarily a positive value. It could also mean that one is ‘tolerating’ the other, until certain conditions are being fulfilled. These conditions can be related to religious or caste lifestyles like the consumption of non-vegetarian food. So, one is tolerated only to the extent that minorities compromise with their own life choices and adopt the cultural values of the majority. Tolerance in this sense is essentially a negative concept and rather than celebrating it we need to question and move beyond it. Tolerance basically refers to a ‘negative peace’: there is no overt violence, but there is no meaningful interaction either.

So, although Muslims are ‘tolerant’ but there is a near universal consensus (nearly 80%) among them to stoptheir girls from marrying outside the community. It appears that Yogi Adityanath is not the only one who thinks like that, but that his views have many takers within the Muslim community also.Then again, while Muslims adhere to the notion of Indian culture which they say is important to them, but at the same time, they want Islam to have a public role in their lives. Nearly 74% of them favour access to sharia courts instead of the secular ones. At present, the All India Muslim Personal Law Board lists 79 sharia courts which are functioning throughout the country, although this may be an underestimation. It is a known fact that justice in Indian state courts is excruciatingly slow but the solution to this cannot be sharia courts which are inherently discriminatory towards women and other minorities. In the same survey, majority of Muslims are opposed to triple talaq but even then, this longing for a separate Islamic justice system is worrying. 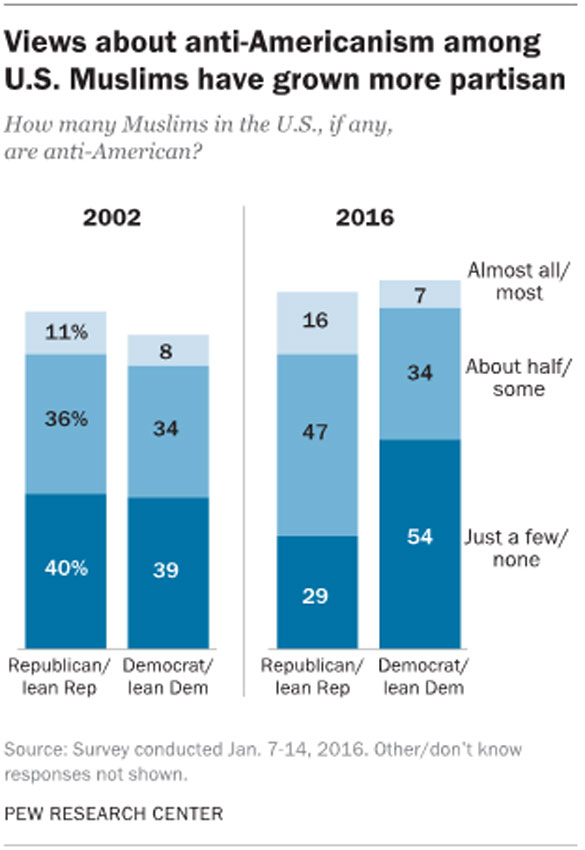 Muslims and Islam: Key findings in the U.S. and around the world | Pew Research Center

Muslims have always denied the presence of caste amongst themselves. And yet, the survey tells us that nearly 70% of them would actively stop a fellow Muslim from marrying outside his or her caste. What is more troubling is that a majority of educated Muslims think likewise which means that higher education hardly has an effect on reducing caste endogamy. The survey also tells us that nearly 74% Muslims have friends within their own caste, something which flies in the face of egalitarian claims of Islam. The survey also tells us that nearly 46% Muslims are upper caste which simply cannot be true. Ethnographic studies have consistently maintained upper caste Muslims are roughly 15% of the total Muslim population in India. This means that Ambedkar’s concept of caste as graded inequality applies to Muslims also. Caste endogamy is thus not just enforced by the Ashrafs but also of the Ajlafs; something that the Pasmanda movement within the Muslims needs to think about.

A measure of societal harmony is whether communities participate in each other’s religious festivities. It is heartening to note that despite the Ulama arguing to the contrary, nearly 20% of Muslims still celebrate the Hindu festival of Diwali. However, this does not translate in other spheres of life. For example, nearly 45% of all Muslims surveyed said that they only have Muslim friends. The figure is better as compared to Hindus but then as a minority, a Muslim is more likely to have transactions with non-Muslims and thus should have friendships across the religious divide. The recent anti-Muslim political climate might have contributed to this state of affairs. But at the same time, we should also not forget that our leading Ulama have always cautioned Muslims not to take non-Muslims as friends.

What the survey unfortunately tells us is that communal bonding is becoming a thing of the past. It would be unfair to blame Muslims alone for this state of affairs. But as Muslims, we need to think about some of the debates that we have been having within our community. One of the ways in which religious separation gets effected is by the insistence on appearing different. The madrasa led discourse within Muslims definitely insists that Muslim men and women should be recognized as such through their dress and appearance. This gets validated in the survey wherein only 18% Muslim women now approve of wearing a bindi which is increasingly identified with Hindu women. One only has to see the multiple fatwas on bindi to understand how the Ulamasuccessfully effected this separation between Hindu and Muslim women.

While it seems like Muslims are respecting diversity, they also want to be in their own little separate self-contained world. While they point fingers at others for discriminating against them, yet there is hardly any talk of discrimination within the Muslim community, especially when it comes to women. The community needs to move from diversity towards pluralism, which means borrowing and sharing with each other, without being afraid of change and transformation.