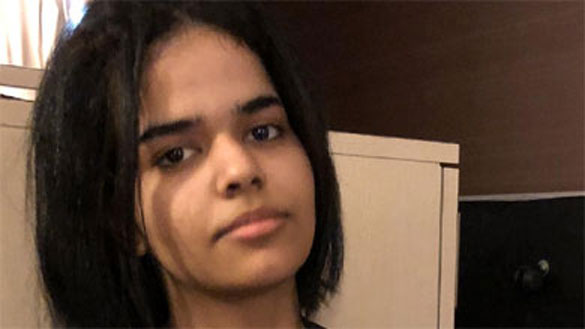 Rahaf al-Qunun, whose Twitter posts for help captured global attention after she fled her family, gets asylum in Canada.

Rahaf Mohammad al Qunun, a Saudi teenager, has been permitted to stay in Canada after an international outcry supporting her right to live with freedom and dignity. She fled from her Saudi family whom she accuses as being ultra conservative. She was even punished for shortening her hair by confining her to her room for months.

There are reports that her ordeal began when she decided to renounce Islam. And that perhaps is the crux of the problem. Islam has a special problem with apostasy and in the case of Rahaf has brought it into spotlight once again.

For now, Rahaf is safe and most probably will be granted a safe passage to a country which she chooses to stay.

However, we need to be wary of the long arm of the Saudi state. The state has been known to kidnap its ‘problematic’ citizens residing in other countries and bring them back to Saudi Arabia. Worse still, there have been reports that its hit squads have targeted dissidents even on foreign territory. A large part of this effort is because the Saudi state fails to differentiate between criticism and treason. Anything remotely critical of Islam or even the monarchy automatically becomes treason. As long as this convoluted thinking remains part of the Saudi establishment, Rahaf Mohammed, and many others like her, would never be safe.

The problem of apostasy is common to all the three Semitic religions. Theologically, all three of them decree that the apostate must be put to death. However, we must differentiate between the reasons for apostasy within Judaism, Christianity and Islam. Within Judaism the apostate is punished for reverting to the ‘old ways’. Thus going back to idol worship and turning ones back to one God makes one apostate. Within Christianity, the apostate is killed for turning his back on Christ. The argument is that once you have embraced monotheism, you cannot go back to the so called pagan ways of old. Exiting the community is punishable by death since the assumption here that monotheism is the absolute standard of religious truth and once a person has embraced it, he or she cannot be expected to deviate from it. Every other form of relating to and conceptualizing God becomes a falsity; something which is deeply problematic in all these three religions. Perhaps all monotheistic traditions are premised on this innate intolerance of other religious traditions.

With Islam the problem of apostasy becomes more complicated. One becomes an apostate not just by renouncing or criticizing God but all its attendant manifestations like the prophetic mission, the holy book and even casting aspersions on the religious traditions. This means that Islam itself, in all its manifestation cannot be critiqued without the danger of committing apostasy.

This was very nearly the situation in medieval Europe when the Church was tasked upon to inquire into charges of apostasy. Over the years though, the church was able to reform itself and therefore today in large parts of Christendom, the notion of apostasy itself has become obsolete. Although there is no sanctioned church in Islam, the fear of apostasy is perhaps much more in this tradition even today. Since there is no intermediary between God and man in Islam, every believing Muslim thinks it is her or his religious duty to safeguard the religion from imaginary assaults more so when the attack or critique is from inside the tradition. Not just mullahs, but there are groups dedicated to detect even the slightest hint of apostasy within the Muslim society.

The dominant interpretation of Islam is that it is a cradle to the grave arrangement. Almost every aspect of a Muslim’s life is supposed to be governed by Islamic tenets defined the Sharia. This makes the possibility of effecting reform within Islam and Muslim societies an almost impossible task.

Critiquing any aspect of the faith which has any bearing on the social conduct of Muslims can automatically be treated as an act of apostasy. It is not surprising therefore that the charge of blasphemy and apostasy has ranged from calling a teddy bear Mohammad to spitting on the wall of the mosque to practicing yoga. Under the circumstances, there have been reformists within Muslim societies who have been killed just for saying some very obvious things regarding the social condition of Muslims. The case of the Egyptian Farage Fouda comes readily to mind. Fouda, through his writings, was campaigning for a separation of religion and politics within his native country. The al-Azhar issued a fatwa against him and declared him an apostate following which he was killed by a group of Muslims who thought they were carrying out the command of Allah. Similar has been the fate of many a writers in Bangladesh who have paid with their life to talk about very basic freedoms in their society.

It is therefore imperative that Muslims must have a frank and open conversation about the problem of apostasy within their societies. If Muslims go on killing everyone who is critical of their religion or any aspect of it, then it is Muslim society itself which will be the biggest loser. After all, any society, which bars the free expression of critique, regresses socially, politically and culturally. And perhaps such an intolerant attitude towards critique, both internal and external, is the prime reason for the decadent nature of contemporary Muslim societies.