Muslims Have Always Been Uncomfortable With Modern Education; The Taliban Is Just An Extreme Example Of This Fallacious Rationality

•        Taliban’s interim higher education minister Abdul Baqi Haqqani stated that co-education and anti-Islamic aspects will not be part of the new Afghan curriculum.

•        Men will not be allowed to teach women students which will effectively means that they will be forced out of schools and colleges.

•        Sadly, this ideological opposition to modern education is not just limited to the Taliban but is shared widely across the Islamic world.

The Taliban 2.0 is trying hard to present a moderate, more acceptable face to the world. Desperate for international support, it initially made reconciliatory noises about the education of women. But then the recent statements and actions of some of its leaders can only mean that it will be very difficult to change what has been hardwired into them. The Taliban are the products of the Deobandi madrasas who have traditionally sought to interpret Islamic teaching in very orthodox ways. The foundational philosophy with which the Deoband was established in the Indian subcontinent is premised on the rejection of what they call as the western knowledge system.

Like everything else in Islam, this rationality too was a product of diagnosing why Muslims had lost power to the British after being ‘rulers’ for many centuries. They had tried everything else: from inviting Abdali to invade India and finally rising against the British in 1857. It was only after the failure of such attempts that Deoband was established to resist the British hegemony in terms of ideas and intellect. 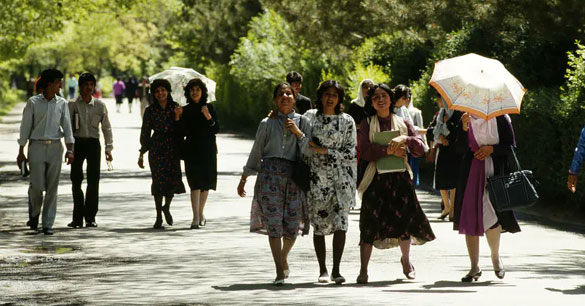 Daily life in Kabul in 1988, one year before civil war broke out. Patrick Robert/Sygma via Getty Images

The political inspiration for the establishment of Deoband had come from a powerful idea present in Shah Waliullah’s writings. He differentiated between Zahiri (external) and Batini (internal) Khilafa (caliphate/zone of power) and argued that even through the Zahiri caliphate cannot be enforced as Muslims had lost political power, the Ulama can become champions of the inner caliphate through teaching and education. So, although outwardly colonized by the British, the inner selves of Muslims would always be answerable to Islam, as interpreted by Deoband. The Madrasa therefore, is more than an educational institution; it is fundamentally a political institution, designed to resist western hegemony.

The Taliban are true to their teaching when its interim higher education minister, Abdul Baqi Haqqani, stated that anything which is antithetical to Islamic teachings will not be part of the Afghan curriculum. He criticized the present educational system as drawn by the ‘international community’ (read western powers) and as failing to ‘adhere to Islamic principles’. Thereafter, he said, ‘every item against Islam in the educational system will be removed’. This Islamic curriculum will be governed by the sharia and ‘men and women will not be allowed to mix’.

Now, it is well within the right of any country to devise its own educational curriculum which should reflect the national concerns and commitments. However, this should not mean that this exercise should hamper the development of any section of the population. The Taliban, by making it clear that they will be guided by the sharia, have positively endangered the educational future of its women. Consider the statement from the Taliban that ‘men will not be allowed to teach women’ as it will violate the sharia laws. This is only possible when there are sufficient numbers of women teachers at all levels of education which is simply not the case. The only effect of this policy will be to drive women out from education, thus negating whatever little gains they have made.

This should not surprise us because they are just being true to their own philosophy. After all, Deoband never thought that education of women was necessary and some of the leading Deobandis were positively hostile to such an idea. Indian Muslims, while criticizing the Taliban, singularly fail to criticize the Deoband for similar views.

Again, it was one of Deoband’s founders, Qasim Nanotvi, who said that there was no merit in learning the western sciences unless it is done for the sole purpose of refuting it. The Taliban’s insistence that nothing in the educational system should be against Islam is simply reiteration of this idea. Unfortunately, the Taliban are not the only group to have such views. In fact, not only are such views widely shared by Muslim groups, there hasn’t even been a serious challenge to such ideas. Consider the Boko Haram for example. Millions are members of this movement which is built around a single idea: the rejection of western education.

If we think that these are extreme examples, then let us see the so called mainstream Muslim groups. In India, one might argue that Deobandis are ‘traditionalists’ and therefore are uncomfortable with modern western education. But we should not forget that the founder of Jamat e Islami, Maududi, held similar views and even dubbed institutions like the MAO College as ‘slaughterhouses of the Muslim mind’. Today, they run a network of schools which imparts modern education but the emphasis is still on learning in an ‘Islamic way’. What might this Islamic way of learning entail? Much like the Taliban, co-education is shunned and girls are told to cover up from a very young age. A student graduating from such a school might know about the theory of evolution, but then would not believe it because the ‘Islamic way of learning’ would tell him/her that it is Allah who created all living beings for the express purpose that they worship him. Needless to say, such schools will produce technicians like engineers and doctors but will hardly give any encouragement to become fundamental researchers or scientists.

It is this limiting of the Muslim mind because of hegemonic Islam which explains why across the Muslim world, we hardly have any institute which is dedicated to cutting edge fundamental scientific research, either in the pure sciences or social sciences. The likes of Pervez Hoodbhoy have argued that this amounts to the perversion of not just science but also of Muslim mind, who at one point were leaders of the scientific world.

The Taliban is but a weirder example of what majority of the Muslim world believes and adheres to. I simply fail to understand how one can criticize the Taliban without pointing out that the same malaise has gripped the wider Islamic world. What stops us from pointing out that when it comes to modern education, there is not much of a difference between the Taliban and our next door Deobandi. 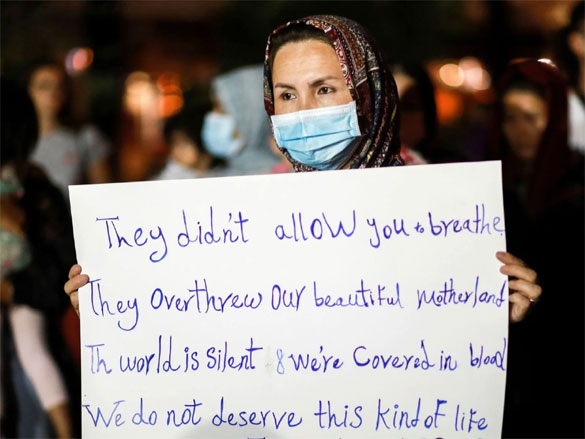 A woman holds a placard as Afghan migrants demonstrate against the Taliban takeover of Afghanistan, on the island of Lesbos, Greece. (REUTERS)

There is a fundamental problem in understanding any science as Islamic or western. Take for example the numeral zero. The development and usage of this concept owes much to Indians but also to the Arabs and the Europeans. How should we then classify the number zero: Indian, Arabic or European? Muslims who pride themselves on the ‘golden age of Islam’ forget that they were in fact extending the knowledge system bequeathed to the world by the Greeks.