A young Muslim woman, Ayesha Khan, decided to end her life by jumping into the Sabarmati. A video which she made just before committing suicide tells us that she could no longer put up with the abuse directed against by her in-laws. She does not blame anyone, especially her husband, but her statement makes it very clear that her life had come to a breaking point; that she had already become an emotional wreck and reached the point of no return. In such a state, the line between life and death gets blurred. Her decision to end her own life must have come after a lot of thought wherein she must have realised that she had reached a dead end. A life which could have contributed much to society, a life which was bubbly and so full of energy, was wasted simply because as a Muslim woman, she could not think of an independent life for herself. 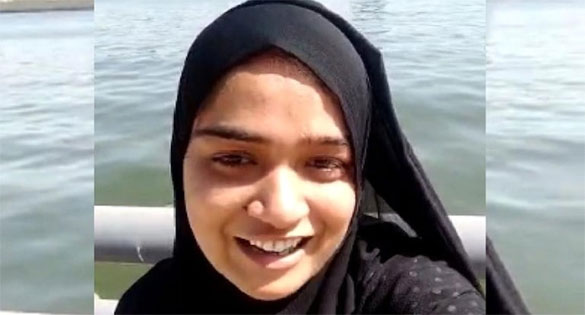 In all such matters, people jump to conclusions and our very first instinct is to blame the husband and his family. This may as well be the case with Ayesha and whatever became of her, but ultimately we should not forget that her poignant death is a collective failure, including that of her own family and of the Muslim society more generally. After all, it appears from the video that she was reasonably well educated and if that was the case, why is it that she did not walk out of an abusive relationship to chart out her own course of life?

While having all the sympathy for her parents, let us also acknowledge that it is their failure also. They must have known for some time what was happening to their daughter and yet they did nothing to address the issue. Like most parents in India, they must have told their daughter to stay put at her husband’s place, fully knowing the repercussions. Indian parents, including Muslim ones, succumb to the demands of more dowry and despite knowing the ill treatment which their daughters receive due to this scourge, decide to remain silent about it. In majority of the cases, despite knowing about violence committed on their daughters, they tend to send them back to their husband’s home.

The amount of money that a family saves for the dowry of a daughter can easily be invested in her education in order to make her financially independent. But then, the priorities of Indian families are very different; the sufferings of their daughters are simply immaterial. Muslim and non-Muslim families have been behaving similarly in this country for centuries.

Any death, especially of a young girl, should be a cause of concern for any community and should be an occasion to introspect what is wrong the practice of the community. It is true that Ayesha’s death disturbed many Muslims but far from analysing the reasons, most Muslims became pedantic and started to sermonise why it is wrong to commit suicide.

For these Muslims, the reasons why this woman took such a step was not important; what was more important was to tell the world that suicide was haram in Islam. The implications of such useless and bogus pedantry is obvious: since Ayesha’s indulged in a forbidden act, she was at fault. As true Muslim, she should not have taken her own life. And if she hadn’t done, then this problem wouldn’t have arisen in the first place. These Muslims are therefore more concerned about what ‘others’ will think about Muslims, rather than being concerned about a life lost. They are the same kind of Muslims who tried to ‘prove’ that Imrana was not raped by her father-in-law simply because such things are not permissible in Islam.

Then there are other sorts of Muslims, high on energy but low on content, some of them calling themselves Islamic feminists, but who also end up blaming the victim rather than offering any serious critique of the problem. These Muslims were aghast as to why Ayesha did not divorce her husband if she was abused by him. For them, Ayesha should have simply walked out of her marriage rather than ending her life. These kind of Muslims, women included, are extremely shallow in their understanding of both religion and society. They do not even know that Islam does not grant the right of divorce to women. That right only and unequivocally belongs to the Muslim man alone. Under the weight of women’s movement, such unequal laws have been changed in Muslim countries and Muslim women have been granted the right to divorce. Not so in India, where the Muslim personal law revels in its regressive provisions against women. And when some Muslim women campaign to change such laws, then they are branded as BJP agents. Muslim women in India can only ask for khula, which is to plead the husband to give her divorce. And it entirely depends on the husband whether he wants to accede to such a request or not. Why will a Muslim husband, who wants to torture his wife, agree to the request of a Khula?

Muslims who are arguing that Ayesha should have divorced her husband simply do not know how Islamic law works in India. It is painful to know that rather than advocating reforms in the Muslim personal law, they are blaming the victim for taking her own life. These Muslims are not very different from some of the third rate Muslim clergy whose sole purpose in life is to ‘rescue’ Islam, no matter whether certain aspects need rescuing or not. However, it is also heartening to note that politicians like Owaisi have spoken strongly on the issue and linked it with the menace of dowry.

Technically, Islam does not have the concept of dowry. Rather Muslim marriage is essentially about bride price, and hence dowry is a typical Indian Muslim practice. Often, demand for more dowry becomes the reason for mistreatment of women, as seems to have happened in Ayesha’s case. There should be a debate within Muslim society about the need to get rid of such practices as it is detrimental to scores of families whose sole purpose becomes to arrange dowry as soon as a daughter is born. There should also be a debate regarding Muslim women’s right to divorce their husbands in case they are abusive. For it is only with this right that she can walk away from a wasteful marriage and live her life with full human dignity. If, instead of these, we are debating whether suicide is permissible in Islam or not, then it must be said that a malevolent sickness has gripped us and that perhaps we are now beyond redemption.