Quran said: ‘Every soul has to taste death.’ This is a universal truth. But there is another universal truth too: no one wants to die. In  Islamic teachings, there is a life after death. Deceased are in an 'intermediate state' until the Day of Judgement, when Allah, the ultimate Judge will decide heaven or hell for everyone. To keep ourselves close to Allah, in life and even after death, there are many good things that we can do. Other than performing our Islamic duties like Namaz, Roza, Haj and Zakat, there is one voluntary act of charity called Sadaqah. Sadaqah is a very simple act to perform. It is voluntary so it provides extra happiness of doing something good to bring happiness to the creation of Allah, without being commanded to do. 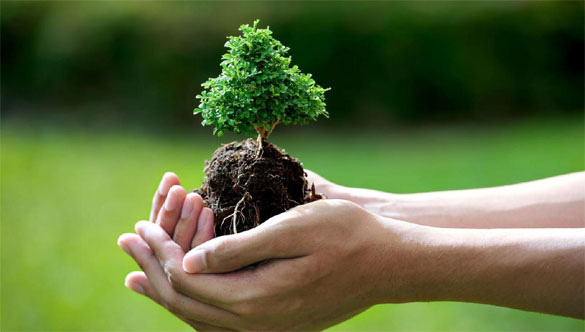 Sadaqah does not require one to be rich. Any act of kindness toward Allah’s creation is an act of Sadaqah. Every act of mercy and kindness is a Sadaqah. As the Prophet Muhammad (SAW) said:

Allah loves them who perform good deeds for their love to Him. Therefore every act of Sadaqah is rewarded by Allah if it is not done to show off. Allah says, in the Holy Quran:

There is no good in much of their secret conferences save (in) him who enjoineth almsgiving and kindness and peace-making among the people. Whoso doeth that, seeking the good pleasure of Allah, We shall bestow on him a vast reward. (Surah An-Nisa-114) - Muhammad Marmaduke Pickthall

Following two Ahadith will establish the benefits of giving charity to please Allah without any show-off.

The Prophet (peace be upon him) said “Sadaqah extinguishes sin as water extinguishes fire,” (Hadith, Tirmidhi).

“The believer's shade on the Day of Resurrection will be their charity,” (Hadith, Tirmidhi).

The Beauty of Sadaqah Jariyah

Sadaqah we can perform only during our lifetime although we will be having its fruits on the day of judgement also. The beauty of Sadaqah Jariyah is that we can perform this good deed during our lifetime and the reward will never cease to come, in life or in death or on the Day of Judgement. Sadaqah Jariyah can be translated as ‘Ceaseless Charity’ in English. It means the rewards of the charity we give in our lifetime will not cease till the day of judgement. It will shield us during our journey through As-Sirat. (As-Sirat is a bridge and according to Islam, every human being has to pass through it on the Day of Judgement before entering Paradise)

Education is one thing which is one of the most beneficial of all the ‘ceaseless charities’. If Schools, Colleges, Universities, Pathashalas and Madrasas are built and an honest education system is established communities will take advantage of it for decades to come. And this process of education will continue from one student to his generations to come. It is much better if these students cater for the demand of the poor and especially the girls.

Medical assistance is one of the most important helps that can be provided to the poor by building hospitals and medical care homes. People getting comfort from their pain will be a source of Allah’s rewards for the charity doers.

Generating resources of water is seen as one of the most likeable charities in the eyes of Allah and the Prophet (SAW). This is because Quranic Ayaat and Ahadees are describing the importance of water for living being, nature, birds and animals. Consider this Ayat, where Allah, the Almighty says in the Quran:

Water is one thing that saves innumerable lives and becomes the source of rich nature.  If we manage the conservation of pure and clean water where there is a scarcity of it, we save lives and nature. See what the Ayats of the Holy Quran say:

And We send down blessed rain from the sky, bringing forth gardens and grains for harvest, Surah Qaf - 50:9 - Dr Mustafa Khattab, the Clear Quran

Let us consider the following two Ahadith and know the value of providing water as Sadaqah and Sadaqah Jariyah:

‘The Messenger of Allah (saw) was asked, “Which charity is best?” He replied, “[Providing] water”’. [Abu Dawud]

Allah’s Messenger (saw) said, ‘A prostitute was forgiven by Allah, because, passing by a panting dog near a well and seeing that the dog was about to die of thirst, she took off her shoe, and tying it with her head-cover she drew out some water for it. So, Allah forgave her because of that’. [Bukhari]

Another beauty of Sadaqah Jariyah is that if for any reason we could do nothing for Sadaqah Jariyah our generations after us can do this act of charity in our name, making us a beneficiary of it beside them themselves. 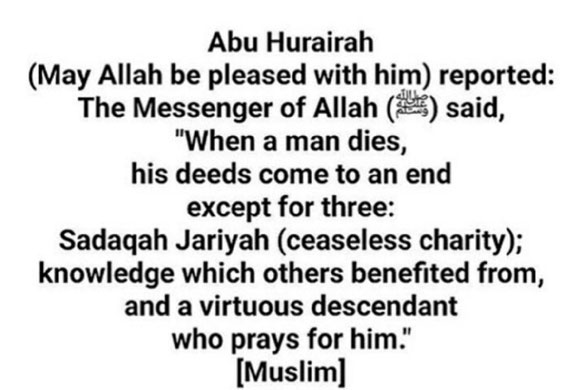 Consider following Hadees narrated by Abu Huraira (RadhiAllahu ‘Anhu) about Sadaqah Jariyah performed in the name of the deceased:

When a man dies, his acts come to an end, but three, recurring charity or knowledge (by which people) benefit, or a pious son, who prays for him (for the deceased). [Sahih Muslim]

Islam, as a religion of peace and forgiveness, has provided various ways of asking for His forgiveness. Islamic way of life can be said to be tough but there are various kinds of concessions (رعایت) for the deserving people, be it either Namaz, Roza, Haj or Zakat.