The Fatwas That Can Change Pakistan's Blasphemy Narrative: The Ahl-e-Hadith Challenge the Hanafi Position on Blasphemy - Part 1

A few days ago, a video of erstwhile pop icon and widely heard Islamic evangelist, Junaid Jamshed went viral on the Internet, in which his remarks were perceived as blasphemy against the Prophet Muhammad (PBUH) and his wife, Ayesha (RA).

By the time of the writing of this article, he has been charged under the Blasphemy Law (clause 295-C of the Pakistan Penal Code). The clause reads:

295-C – Use of derogatory remarks, etc., in respect of the Holy Prophet:

Whoever by words, either spoken or written, or by visible representation or by any imputation, innuendo, or insinuation, directly or indirectly, defiles the sacred name of the Holy Prophet Muhammad (peace be upon him) shall be punished with death, or imprisonment for life, and shall also be liable to fine.

The law prescribes a fixed death penalty for all those who are found guilty. The option of life imprisonment was made defunct after a 1991 Federal Shariat Court judgement.

Junaid Jamshed has already responded with a public repentance, re-affirmation of his faith and a plea for pardon.

Unfortunately, for Junaid Jamshed, the dominant religious narrative in the country holds that blasphemy is an unpardonable offence.

Simply put – you blaspheme, you die.

No ifs, ands or buts about it. The credibility of this assertion is built on an apparently universal consensus (Ijma) on the subject across all four Sunni schools of thought. By maintaining this front of scholarly consensus, the religious leadership disallows any concept of an alternative position.

This idea of a unanimous scholarly endorsement of an un-waivable death penalty for blasphemy has been relentlessly repeated: in the Federal Sharia Court Judgment on the blasphemy law in the ‘90s, in the Parliament, in the popular print and oral narrative on television channels, and has seeped deeply into the consciousness of the Pakistani population.

In the collective imagination of mainstream Pakistan, blasphemy is not a pardonable offense and anyone who believes otherwise is also committing blasphemy, and must similarly pay with their life.

Junaid Jamshed’s plea for mercy has raised a question about whether or not a repentant blasphemer may indeed be pardoned.

This is also not the first time the issue is coming under inspection.

All were led to the question that Junaid Jamshed is currently plagued by:

Is Blasphemy A Pardonable Offense?

The answer, it is clear, was a categorical yes.

The stance that ‘blasphemers who ask for a pardon would be spared the death penalty’ has already been established by the founder of the Hanafi school of thought, Abu Hanifa.

Within the Hanafi position, it simply does not go higher than Abu Hanifa, and it is the Hanafi school of thought that is foremost in significance, in terms of religio-legal debates in the Supreme Court, the Federal Sharia Court and the Council of Islamic Ideology.

Moreover, a long line of students and followers of Abu Hanifa, legal heavyweights of their respective eras, further corroborated this position in many of their works. Centuries of Hanafi scholarship have maintained the same categorical answer to our original question: Yes, blasphemy is a pardonable offense.

Keep in mind: as per the principles (Usul) of the Hanafi jurisprudence, a consensus of Abu Hanifa and his students cannot now be challenged.

This is one of the primary principles of Taqlid in traditional Islamic legal thought.

The letter of the law 295-C makes no mention of the permissibility of pardoning a blasphemer.

In fact, it is a Federal Sharia Court interpretation of the law that serves as the operational blueprint of the application of the law, which rules out pardon.

They considered the same sources as listed above, and somehow reached the opposite conclusion: that the authoritative position of Imam Abu Hanifa and his students is that blasphemy is not, in fact, a pardonable offense.

How could this possibly have happened? How could such a clearly stated position, maintained for centuries, be so misinterpreted?

In my pursuit of answers, I discovered that in the 15th century a Hanafi scholar, Al-Bazzazzi, misquoted the Hanafi position on pardon that had been established since the time of Abu Hanifa.

Imam Ibn e Abidin, one of the most revered scholars in South Asia, chancing upon his erroneous depiction, was moved to write an impassioned critique of this divergent position – not only explaining Bazzazzi’s error as a 'misreading of two important works' (Al Sarim-ul-Maslool ala Shatim-ur-Rasool by Ibn Taymiyyah and Al Shifa by Qadi Iyad), but also summarily dismissing the idea that blasphemy is unpardonable as “ridiculous”. 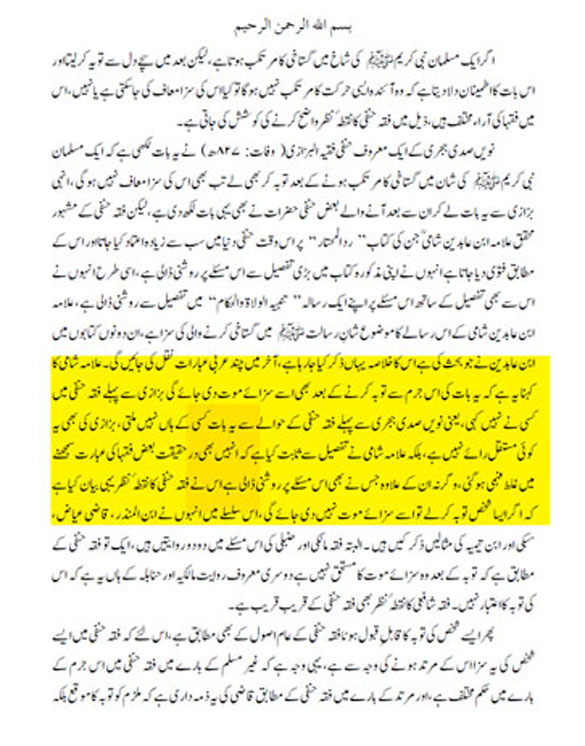 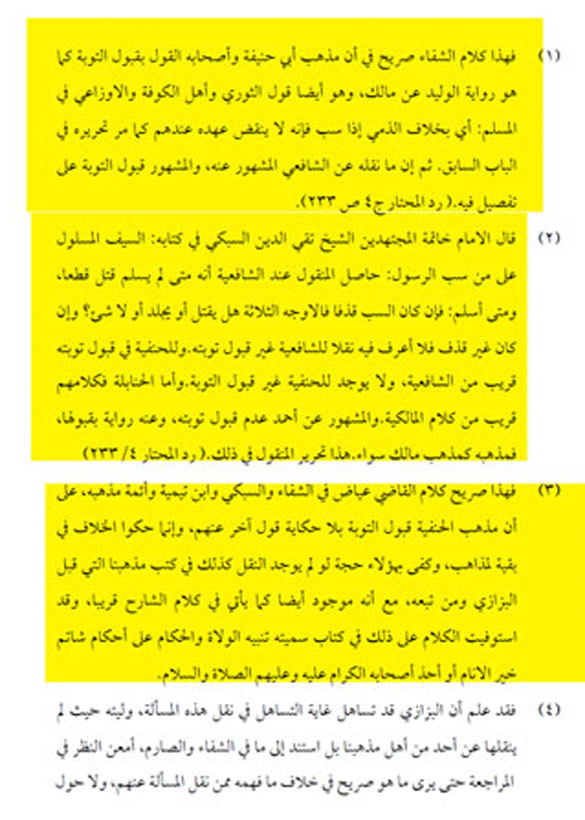 One of the most important scholarly figures in Islamic legal tradition, and one of the most revered figures in Deobandi madrasas across Pakistan, Imam Ibn Abidin had the wisdom and foresight to warn that these competing narratives, if allowed to exist, would create undue confusion and chaos. He counselled the scholars to be meticulous in their research on the referencing of primary resources.

Where Pakistan's Laws Came From

Advocate Ismaeel Qureshi, the architect of the blasphemy law, apparently did not get the memo.

In his best-selling book on blasphemy and his petition, Qureshi apparently built his case of an irrevocable death penalty, with no scope for pardon on the works of leading Hanafi authorities, and ironically, Imam Ibn Abidin himself.

In an a case of history repeating itself, he followed in Al-Bazzazzi’s footsteps in erroneously subverting the position of Imam Ibn Abidin.

At one point, in Fatawa e Shami, Ibn Abidin takes Bazzazzi’s claim – ‘the punishment for blasphemy is death, it is unpardonable and anyone who disagrees is also guilty of blasphemy’ – dissects it and goes on to criticise it for the next six pages. 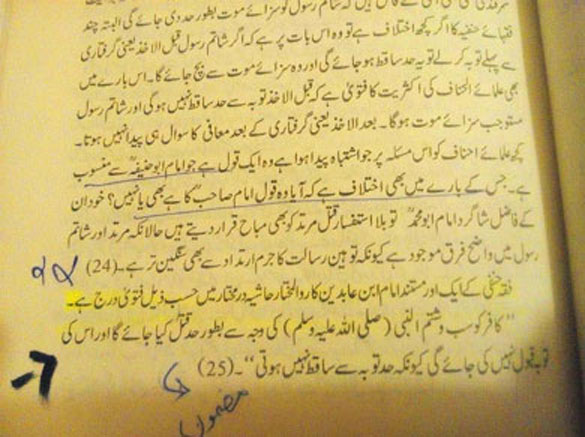 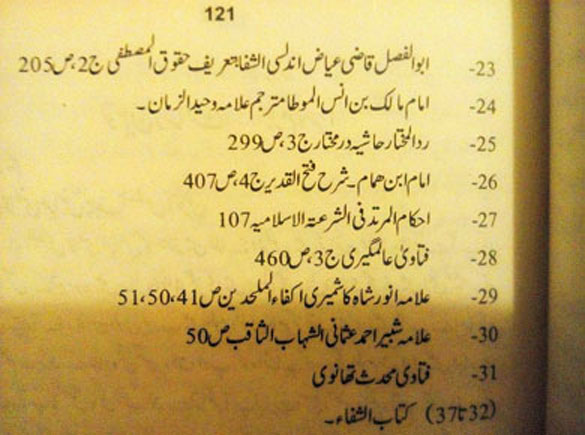 When I learnt of this, I approached Advocate Ismaeel Qureshi with the primary text and showed him the counter-evidence to his assertions.

Qureshi acknowledged that mistakes had been made in the research upon which the judicial interpretation of Pakistan's blasphemy law now rests. The history and process of how the events transpired to produce the law in its current form therefore, reads like a series of unfortunate errors.

The repercussions for those caught in the crossfire, are however, far more deadly than just 'unfortunate'.

Why does no credible source from the mainstream religious leadership then step forward and set the record straight?

It seems to be of greater importance to withhold the facts of the case, as a more open dialogue may also incidentally amount to collusion with the secular position – surely, the worst of crimes.

In the midst of all this chaos and misinformation, there is still hope for the likes of Asia Bibi and Junaid Jamshed.

There is no need to change the letter of the blasphemy law for Junaid Jamshed and Asia Bibi to get their pardon. All that is required is to revisit the judicial interpretation, and rectify the erroneous conclusion of the Federal Sharia Court that was reached on the basis of dubious research.

The blasphemy law, according to the Hanafi position, allows for pardon.

That is all that Imam Ibn Abidin pointed out.