Pakistan is at a crossroads regarding its social, political and economic destiny. It remains trapped in the quagmire of economic stagnation, crumbling public faith in state institutions, a deplorable law-and-order situation, political tumult, sex-based violence, low participation of women in the political and economic spheres, illiteracy, quota systems, sexual apartheid, deprivation of women’s fundamental rights and an androcentric mentality because of a cultural relativistic approach.

All these knotty issues have driven the country into gender inequality by putting social, economic, political and legal impediments in the way of women’s empowerment. 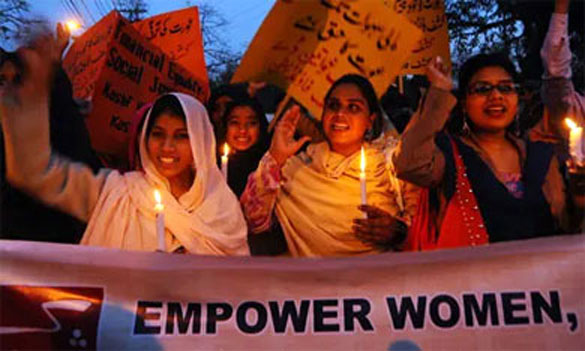 Social constructionism is a theory of gender studies that deals with gender-based roles and androcentric mental paradigms of society. According to the theory, men and women are naturally equal. However, the roles that are assigned to women in society are constructed on the basis of social and cultural norms and values of the society. Male-dominant societies and women’s subordination are the by-products of societal norms and values. Gender is a social phenomenon that has nothing to do with sex. Sex is natural but gender is a social and cultural product.

According to the book Pakistan: A Hard Country by Anatol Lieven, Pakistan is a diverse country yet has a male-dominant culture, and people of the land are more committed to their cultural and traditional roots that pave the way for social, political and economic inequality for women. Thus women are deprived of their basic and constitutional rights because of irrational cultural norms and practices.

Cultural relativism is another factor in inequality. People crush any sort of intellectual or political resistance against their culture, of which they feel proud. In Pakistan, cultural relativistic values have spoiled not only the aims and objectives of feminism but also Islamic rights for women.

People are more concerned about their cultural norms and values than religion or any intellectual grooming. They prefer culture to religion in their practical lives. Their living pattern and gender-based roles are highly constructed on their culture, with less influence of religion, morality or international movements.

These factors lead to female subordination in household affairs. Inhuman, immoral and non-Islamic traditional practices such as honour killing have prevailed and are still being practiced by some people because of their cultural relativistic mentality. That needs to be changed in line with the socio-political as well as economic dynamics of the postmodern world.

In order to mitigate the effects of cultural relativism, various types of feminism have given divergent dimensions. These theories try to figure out the causes of women’s issues.

According to radical feminism, Marxist feminism and socialist feminism, women are subordinated by men because of their economic dependency on their male partners. Women work at home. They give birth to children, remain busy in household work like washing and ironing clothes, cleaning the home and other chores from day to night. All the work is unpaid.

On the other hand, their partners are paid for their work. This inequality aggravates violence and inequalities because of their economic dependency on men. By giving women equal economic opportunities, their issues, particularly violence, can be eradicated. So our government should take precautionary measures to provide equal economic opportunities for women to reduce their economic dependency on male relations. There must be a mechanism for housewives to be paid for their household work.

According to liberal feminism, women languish because state institutions and offices have a monopoly of men. Women’s participation in politics and offices is discouraged by men because of their fear of losing the monopoly.

Law-making bodies and legislative assemblies are full of males, so they legislate to empower men but not women. This legal and political discrimination leads to women’s subordination indirectly. They cannot raise their issues on a national level.

From the first article to the 25th of the 1973 constitution, legal provision is given to the fundamental rights of all people of Pakistan without any discrimination, but in practice this is not carried out consistently. Such negligence further empowers males who are already in power, and women’s roles are limited in the legal and legislative sphere. So legal provision of women’s rights, strict punishments for inhuman and unethical cultural practices, and escalating women’s participation in political discourse can play a constructive role to empower women in the country.

Certain steps by the state are required to address the challenges that are constraints to women’s empowerment. Women must be provided with fair and equal economic opportunities. Their rights must be granted legality. There must be a comprehensive mechanism to pay women of their household work. Women’s economic dependency on male relatives should be reduced by providing them easy access to jobs.

Women’s participation in politics and other state institutions must be encouraged by the state. Intersectionality must prevail in the relations between men and women to improve women’s status in Pakistan.