In the years since 9/11 and 7/7, Britain’s Muslims have tended to be categorised into one of two groups – either as dangerous religious extremists, or ordinary British citizens much like the predominantly secular population. But when I went undercover to explore the world of the British Sufis, I found a diverse people whose relation to mainstream Islam was more complex than I’d anticipated. 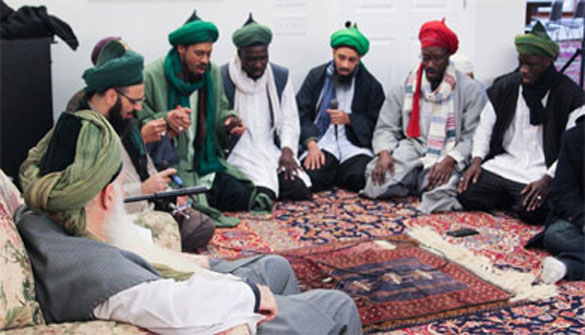 Sufis belong to an ancient mystical tradition which has always had an ambiguous relationship to orthodox Islam and, consequently, have often been treated as dangerous subversives by the authorities. According to legend, one of the earliest Sufi masters went into an Iraqi marketplace and made an exuberant public statement about the internal unity he’d achieved with the divine: “Ana Al Haqq – I am the truth!” Al Hallaj’s identification with one of the ninety-nine names of Allah was considered blasphemy; he was imprisoned and eventually executed. Today, in the parts of the world such as Pakistan where Islamic extremism is on the rise, Sufi gatherings and shrines are still under attack.

The religiously tolerant atmosphere of Britain enables a variety of Sufi groups to flourish quietly, both in their westernised form and among the British Asian population. So, as part of my research  for a book on Britain’s evolving faithscape, it struck me that the Sufis, with their reputation for gentleness and moderation, might be the kind of open kind of faith, rooted in experience rather than doctrine and institution that I was finding elsewhere. Sufis meet in gatherings called circles, practising rituals designed to foster the ‘remembrance of God’; I went, first, to one run by the UK Sufi Order founded by Inayat Khan, a key figure in bringing universal Sufism to the west.

This branch of British Sufism turned out to be predominantly white and middle-class and I felt uncomfortable within my comfort zone. I wanted to get a sense of how Britain’s Muslims – the country’s second largest faith group – practised Sufism. So I sought out the Naqshabandis-Haqqanis, devout Muslims who combine Sufism with the observance of Islamic law and who were part of the wave of immigrants who came to Britain from the Indian sub-continent in the fifties and sixties. I decided not to mention the book and, on advice, wore a headscarf. I wanted to fit in, and was happy to be seen as a westerner contemplating conversion, a common enough figure in 21st century Britain. Like a mystery shopper, I wanted to test the warmth of my welcome.

In the course of so doing, I came to appreciate something about these groups that you would never know from the outside: their diversity. The first circle I attended was ultra-traditional: led by men,  us women participated, as far as we could, on the other side of a curtain. Not surprisingly, I soon moved on to a circle that, in modern British parlance, was much more inclusive. This group was warm and welcoming and, for months, I returned to its weekly meetings many times.

I had heard, in the course of my research, that some Sufi groups tended to be politically conservative – even, one insider told me, to the point of supporting authoritarian regimes. But as I listened to the references to politics and world events in Sufi prayers, I never found this to be the case.

What else did I find? Rituals that recognised the important role that sound can play in spiritual experience. An informality and intimacy generated by life at floor-level. (No awkward ignoring of your neighbour in a wooden pew!) And, as I watched practising Muslims go through the preparatory prayers and then shared the common meal with them afterwards, I became aware of a religious practice that fully involved the body. Like a traveller who had visited a lot of places that were interesting but not for me, I had found a place which was so comfortable that I wondered, briefly, whether I could stay…

But to do Sufism properly, you really have to become one, to find a teacher – a Murshid – and commit fully to that particular spiritual path. As a pluralist studying different forms of religious life and, in my personal spiritual biography, a cultural Christian with pagan tendencies, this wasn’t something I could do. But I remain grateful to the Sufis of Britain, who taught me so much about the spiritual life of the body, and about a side of British Islam about which we hear little.

Alex Klaushofer is a journalist and author who has written extensively about social and religious affairs in Britain and the Middle East. Published in 2015, The Secret Life of God chronicles how, in an age when institutional religion is on the decline, people are increasingly describing themselves as ‘spiritual but not religious’. The chapters exploring British Islam are available as a standalone ebook under the title Sufi Circles: Undercover with Britain’s Other Muslims on Amazon.