This is the second part of the article in which I will present to you the data which the Gallup Organization gathered. “The Gallup Organization made the startling decision to create a poll that would show the world what was really going on in the minds of Muslims around the world. There was no political or even social agenda, just the desire to act as a bridge between the Muslim world and the Western world.”1 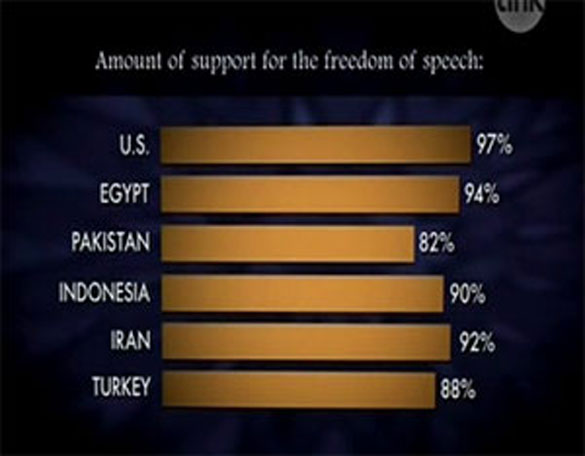 The interviews were conducted in 35 Muslim majority nations, as well as in Europe and the USA. Tens of thousands of Muslims were interviewed and this is what they found:

‘Do you believe the Western world respects the Muslim world?’ 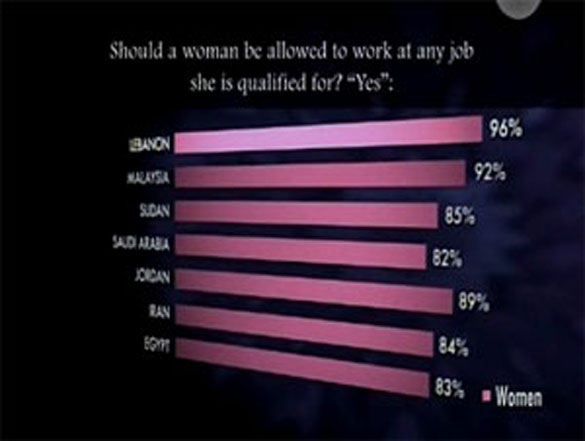 The majority said ‘no’. 84% of Palestinians, 80% of Egyptians, the surprising thing was that even the majority of Americans agreed: 54 % said that the western world does not respect the Muslim world. (All the graphical representations are given at the bottom of the article)

Jihad Fakhreddine, Regional Research Director of the Gallup World Poll says: “There is this notion that the Arabs are a bunch of fanatics; we feel that the West sees us through the lenses of Bin Laden. 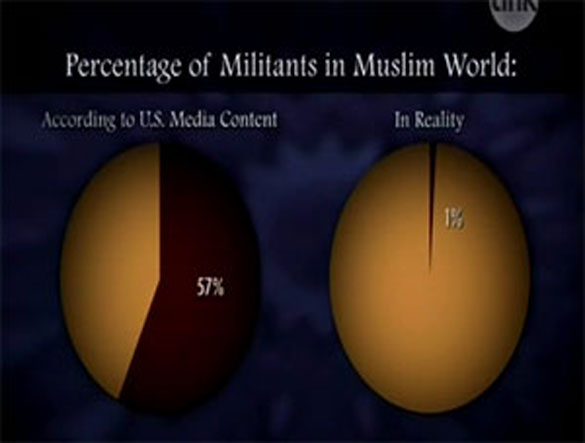 According to a media content analysis 57% of the people portraying Islam in the US News Media are militants; however in reality they make up only 1% of global Muslim community.  There is a stark contrast between the reality and the media construction; and according to Dalia Mogahed, Executive Director of Gallup Centre: “this creates the image that Muslims are violent people”.

Muslim women are portrayed as submissive; in a survey almost three-fourths of Muslim women were depicted as “passive victims”, as against only 15% of men.  But how does this compare to what Muslim women actually feel? 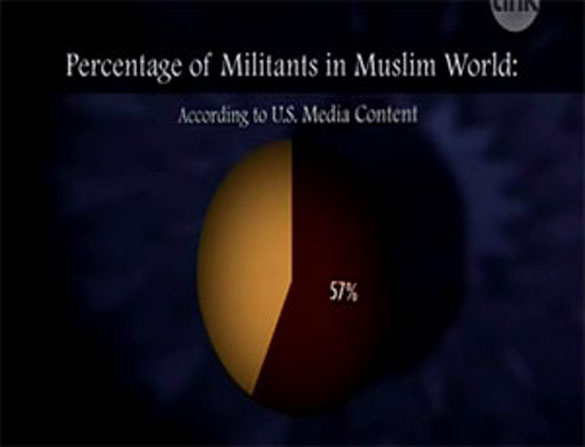 How do Muslim women think about Hijab? Dalia Magahed says “Hijab is thought of as a symbol of women’s inferiority. But Muslim women, who are educated and powered, view it different. What Hijab does for them is that it takes the emphasis away from their exterior and focuses it on their interior, on their mind, on their intellect, on their heart”. She continues “women wear the Hijab just because it is a religious mandate”. 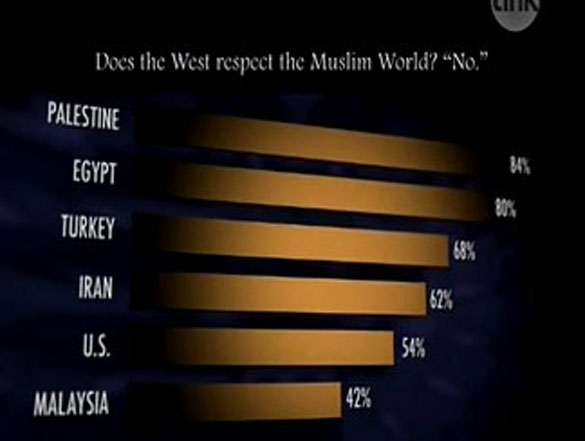 When asked about the ‘Amount of support for the freedom of speech’: 97% in the US, 94% in Egypt, even in Pakistan 82% of people support freedom of speech. Muslims don’t have a problem living in a democracy, the poll found. The third largest number of Muslims is found in India, which is the largest democracy in the world, and they don’t have any problem living in India.  And there is nothing about Muslims which are inimical to democratic functioning.

Kenneth Pollack, Saban Centre of the Brookings Institution says: “The United States has promoted democracy in, more or less, every country of the world, with one exception of the Arab world. Instead the US is glad to support autocrats who prevent them from having.  So what we have then are authoritarian regimes that had been propped up, politically, militarily, by the western powers.” 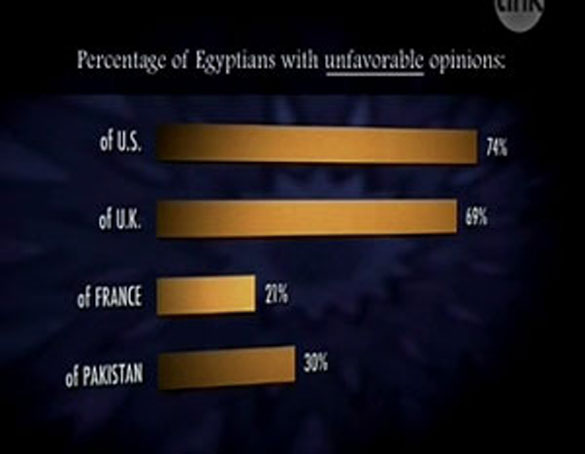 For the last seven to eight decades, the policy of the US has been: the Arab leaders are all autocrats, they control their population, they will make sure the oil flows, they keep a lid on things and that is what the US wants and the US will not promote democracy, so that the US will get what it wants and these autocrats can deliver it and that is a source of great resentment, anger and frustration in the Arab world, and the wider Muslim community.

This result is quite shocking, but if we analyse it then we will come to know that the policy of the country is more important than their religion or culture. The percentage of Egyptians with unfavourable opinions: US and UK are not in the good books of the Egyptians, with 74 and 69% respectively; France (21 %) is much better than these countries and even better than a fellow Muslim country- Pakistan (30%).

Another striking finding was the opinions of Muslims regarding Canada versus the US. Canada is closer to the US to many countries. It is about as similar to the US, minus foreign policy. 67% of Kuwaitis hold negative views about the US; while only 3% of them have unfavourable views about Canada. It is very clear that it is not the culture, but rather the perceived policies that determine most of these things.

The other question was ‘how much sympathy is there for terrorism’? People were asked about the moral justifiability of terrorist acts on a five-point scale, where a ‘1’ was completely unjustified and ‘5’ was completely justified. When asked about 9/11, there was a range of answers. The majority, however and thankfully, said ‘1’, that means it is completely unjustified; and there was also that 7% on the other extreme which said that 9/11 was completely justified. And these 7% could not produce anything from the Quran to justify it, rather they sounded like any revolutionary group, having more of a political agenda rather than a religious agenda.

Majority of Muslims completely reject attacks on civilians, 71% in Indonesia, 83% in Lebanon, 88% in Turkey.

Those 7% who completely justified 9/11, they are the ones who have mostly negative views about the US. All these 7% are not terrorists. They however support it and their number is not in the millions, but they are in the thousands, out of over 1.6 billion Muslims. These 7%, the poll found, were no more religious than the mainstream. What distinguished them from the mainstream was not their “piety” but their “politics”. They are politically radical, say Dalia Mugahed, and the definition of a political radical is one who wants political change quickly and through violent means, if need be. They actually fit the profile of a revolutionary much more than a religious zealot.

They were much more likely than everyone else to say that sacrificing their lives for the cause they believed in was completely justified; they were also much more likely to say that in general attacking civilians was justified. In the graphical representation they just broke off into their own cluster, different, and very distant from the mainstream. These 7% not only hold extremely negative views about the US and the Israel but they are also against their own government.