King Fahd Of Saudi Arabia, King Hussein Of Jordan, And King Hassan II Of Morocco Are All Descendants Of The Prophet – Australian Broadcasting Corporation 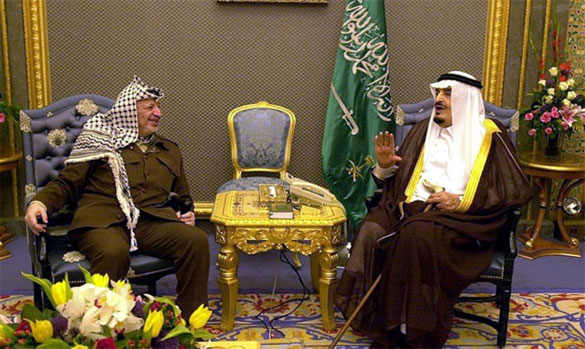 His Majesty King Fahd bin Abdulaziz Al Saud of Saudi Arabia and Custodian of the Two Holy Mosques hosts Palestinian President Sayed Mohammed Yasser Abdel Rahman Abdel Raouf Arafat al-Qudwa al-Husseini commonly known as Yasser Arafat on 26 NOVEMBER 2001 at the Royal Palace in Riyadh, Kingdom of Saudi Arabia. Arafat was a member of the House of Al-Qudwa which has produced prominent Arab figures since the seventeenth century. The family traces its origins to two brothers, Sayed Mohammad bin Yusef al-Qudwa and Sayed Arafat bin Yusef al-Qudwa (the first), who settled in Gaza in 1658 AD. The Qudwas were always known as notables by belonging to the Ashraf class, the highest hereditary title of nobility to the highest social/political class in the Muslim World; also known in pre-modern society as the Hashemites- belonging to the Quraysh tribe, which descended from Canaan. The Canaanites (Banu Kinanah) were divided in four branches: An-Nadr, Abdumanat, Malakan, and Malak. Tabari wrote, “… the descendants of al-Nadr ibn Kinana were called Quraysh.” The Canaanites were known for their red and purple cloth (a purple dye was extracted from murex snails found near the shores of Palestine, a method now lost). It was the Greeks who first called the Canaanites “Phoenicians”, and their land “Phoenicia”, which meant “purple.

In 2003 the world media reacted to the capture of former Iraqi President Saddam Hussein. According to Al Jazeera News, which cited Agence France-Presse (AFP), which reported “Saddam’s name struck off Prophet’s lineage“.

Al Jazeera reported, “The name of Saddam Hussein has been removed from the list of descendants of the Prophet Muhammad. Decision to strike his name off was taken after US capture.”

The head of the union of Ashrafs, Al-Sherif Najeh Muhammad Hassan al-Faham al-Aaraji admitted that the ousted president had been able to cheat despite the great value and honour attached to the line which is guarded in Baghdad.

“Saddam had forced the origin experts to falsify his genealogical tree so that it went back to the Prophet,” Al Jazeera reported.

It was during this chaotic time for Iraqi Arabs, Willacy was sent to report live from Baghdad, Iraq for Australia Broadcasting Corporation on Saddam’s capture, and what ensued.

Willacy’s report, titled “Tracing Saddam Hussein’s roots” which can still be read online here, talked about how Iraq’s former President Saddam Hussein allegedly used “force from power”, and the threat of “facing a possible death sentence”, to establish his “status as a Sayyid”, and how after his capture, his name was “revoked.”

According to the transcript of Willacy’s report, broadcast by AM Radio on December 24th, 2003, at 08:11:40 Willacy cites a Iraqi cleric, and member of Iraq’s renowned Al Sadah Al Ashraf (Association of the Honourable Lords), the Arab world’s most exclusive club, Sayed Ali el Waeth saying, “King Fahd of Saudi Arabia, King Hussein of Jordan, and King Hassan II of Morocco are all descendants of the Prophet. But Saddam, no. He’s not a Sayyid.”

Perhaps not focused upon at the time, Willacy’s report contained a major revelation about the then monarch of the Kingdom of Saudi Arabia, the Custodian of the Two Holy Mosques His Majesty King Fahd bin Abdulaziz Al Saud – that according to Willacy’s source inside the exclusive club Al Sadah Al Ashraf – he descends from the Prophet Muhammad.

If accurate, Willacy’s report brings to light a new level of legitimacy for the Saudi Royals which invalidates all potential rival claims by both Turkey’s Erdogan and Iran’s Supreme Leader over leadership of the Muslim world, and potentially paves the way for unprecedented public support for them then ever publicly known in modern history.

This also means Saudi Arabia’s Crown Prince His Highness Mohammed bin Salman, known as MBS, could also be a relation to the Prophet Muhammad.

As Arab Kings, the House of Saud was publicly known to be related to the Prophet Muhammad and the Imams of Aal al-Bayt when their lineages were traced back to Abraham, and Ishmael, builders of the Holy Kaaba at Makkah.

This claim by a member of Al Sadah Al Ashraf, Sayed Ali el Waeth, published by ABC News (Australia), if established or even confirmed, will change attitudes in the Islamic world and severely delegitimatize rivals of the House of Saud, including in specific Erdogan of Turkey, and some in Iran.

According to Al Jazeera, Iraq’s Al Sadah Al Ashraf guard the ‘Book of Arab Origins’, a large book which contains lineages that go back to the Imams Hassan and Hussein, sons of the Imam Ali bin Abi Talib by his wife Fatima Al Zahra, daughter and legal heiress of the Prophet Muhammad.

Many Iraqi Muslims of the Al Sadah Al Ashraf believe Fatima Al Zahra inherited custodianship of the final Book of God, Kitab Allah, from her father the Prophet Muhammad, whose personal authenticated copy was guarded by her after him, and from her, passed to her descendants known as the Twelve Imams of the Children of Fatima.

After the fall of Saddam, a new Ashrafs’ Union was set up by the men who under Saddam were part of councils of the Sayyids, or Lords, descending from Imam Hassan and Imam Hussein. Al Jazeera reported the union has the backing of religious dignitaries from all Muslim traditions, including the esteemed Hawza Seminary in Najaf.

The first committee of Ashrafs was set up in Kufa (Iraq) in 830 in the era of the Abbasids. It moved to Baghdad, which became a centre for similar committees from the Arab and Muslim world.

In the 1800s, the Ottoman Turks suspended its activities and in 1917 the British abolished the union totally.

Sayed Ali el Waeth, the source for Mark Willacy’s report was a member of this exclusive union, and none of his companions were reported to have refuted his claim regarding King Fahd, biological brother of the current King Salman bin Abdulaziz Al-Saud, and uncle of Crown Prince Muhammad bin Salman, being a Sayyid!

In 2008, John Ricardo I “Juan” Cole an American scholar, and historian of the modern Middle East and South Asia, and Professor of History at the University of Michigan reported that the icon of Western civilization, the British royal family, has Arab Muslim antecedents and is in fact descended from the Prophet Mohammed through the Arab kings of Seville, who once ruled Spain. According to Cole, who cited the UK’s prestigious Burke’s Peerage, the genealogical guide to royalty from 1986, said, “by marriage, their blood passed to the European kings of Portugal and Castille, and through them to England’s 15th century King Edward IV.”

Rodrigo García-Velasco, a PhD Scholar at Woolf Institute & Faculty of History, University of Cambridge, elaborated on this relation stating Zaida, a Muslim princess living in 11th-century Seville, is one of the most extraordinary ancestors of the British royal family.

“Her bloodline reached the English shores through her engagement to Alfonso VI, king of León-Castile. From their offspring descended Isabel Pérez of Castile, who in the 14th century was sent to England to marry Edmund Duke of York, son of King Edward III of England” said Garcia-Velasco for the University of Cambridge.

“Their grandson, Richard, Duke of York, led a rebellion against King Henry VI which developed into the Wars of the Roses. Richard’s second son Edward took the throne in 1461. Thus the legacy of Islamic Spain – better known as al-Andalus – found its way into the Plantagenet royal court.”

Until 1917, the House of Windsor used their original name Saxe-Coburg-Gotha, indicating their Germanic roots, but as a result of the First World War against Germany, they decided to change their name to Windsor.

In fact, most of Europe’s royal families – including those of Greece, Denmark, Sweden, Russia, Austria and Spain – trace their bloodlines back to one another, through Zaida of Seville, thereby giving them the right to also claim relation through her, to the Prophet Muhammad.

Respected experts and commentators from the Arab world as senior Ali Gomaa, the former Grand Mufti of Egypt, commented Zaida of Seville was the offspring of al-Muʿtamid, ruler of Seville and a descendant of the daughter of the Prophet, Faṭima and her husband Ali.

If established as authentic, this additional relation to the Prophet Muhammad would make the House of Saud not only entitled to the most prestigious title of the Arab world – Sayyid – but also relatives of virtually every European royal, including Elizabeth II of England, since Alfonso VI.

Ahmed Khan is the Founder and Editor-In-Chief & Publisher of The Rahnuma Daily (theRahnuma.com), the online English daily edition of The Rahnuma-E-Deccan Daily (ReDD), India’s oldest Urdu daily print newspaper established in 1921. More than 81.1 million Indians identify Urdu as their language, and as per the annual INA (Indian Newspapers Association) report, ReDD ranks among the top 5 most widely circulated and read Urdu daily print newspapers throughout India. Ahmed resides in Hyderabad at his maternal ancestral home

Mark Willacy is a reporter for ABC Investigations, based in Brisbane. Willacy was former Middle East and North Asia correspondent for the Australian Broadcasting Corporation, on its AM Radio. According to Willacy’s profile, he reported for the ABC in more than 30 countries. He’s twice been named Queensland Journalist of the Year and is a five-time winner of Australia’s premier journalism prize the Walkley Award. In 2019 he won a Logie Award with Four Corners for his story on the Thai cave rescue. Mark has written two books. This establishes Willacy is a considerably reliable journalistic source.