The Problem Lies Not In Our Blasphemy Law, But In Ourselves

The blasphemy laws of the Pakistani Penal Code have been a subject of fierce debate ever since they were formed, under the regime of Ziaul Haq. Pakistan was born in the name of Islam and by its constitution, the Islamic way of life is to be propagated and protected. 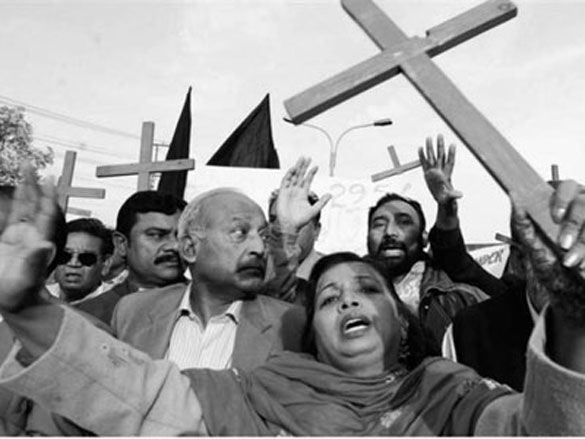 Pakistan was also born out of the dire need for religious freedom of the Muslims of the subcontinent. This message was displayed on the Pakistani flag, where a white band proudly streamed next to a wider green band, declaring to the world that while Pakistan was a Muslim state, the rights of all minorities would be protected. The constitution of 1973, declared Pakistan to be an Islamic state and Article 33 protected everyone by stating:

It is the country’s duty to discourage parochial, racial, tribal, sectarian, and provincial prejudices among the citizens.

The changes in blasphemy laws brought about from 1982 to 1986 span over several sections in the penal code of Pakistan. In essence, it protects any public outrage by forbidding the defiling of the Holy Quran, vandalising places of worship or sacred objects, defaming Prophet Muhammad (PBUH), making derogatory remarks against Muslim holy personages, and so on. It also increased the punishments of the offences in these amendments.

Since then, the statistics of people accused of blasphemy have sky-rocketed. Out of the 4000 accused, 1000 have had cases registered against them. Half of the cases are against non-Muslims who, incidentally make up only 3% of the population. Then comes the part which made the world sit up and take notice─ the vigilantism!

Twenty of the accused were killed extra-judicially, some while in police custody. Even the accused who were not convicted were subjected to violent persecution with the local religious leaders calling, at times, to burn them alive─ without an investigation, without a trial.

Does that sound like the workings of a country governed by laws?

Several politicians, lawmakers and minority leaders have tried to argue about all sides of these laws. They have tried to call for an amendment of the blasphemy laws, others have called to abolish them altogether. Some have died trying; all have failed.

My dissatisfaction is not with the body of these laws, so I will not present a case for the amendment or the abolishment of these sections of the penal code. My problem is with the enforcement of these laws which makes Pakistan appear as a hard-lining, unjust, unfair state, where human rights mean nothing.

In Pakistan, all you need is a grudge and a cold heart to point a finger at someone and shout “Blasphemer!” to bring about all kinds of hurt upon them─ whether the accusations are founded in fact or vendetta.

The implementation of these laws is a farce. The latest case of 11-year-old Rimsha is a testament to this. The details of this case have been plastered all over the media so I won’t repeat them here. She was dragged from her house, wrenched away crying from her mother, without as much as a thought to whether she was guilty or not, or what her rights were as a citizen of Pakistan.

Was it a mistake by a child suffering from a birth defect or was it the conspiracy of a malicious neighbour? Since she was a non-Muslim, was the sanctity of the Holy Quran ever explained to her? And the most important question of all; did we plant a seed of hatred and fear against Islam in non-Muslims by the way we handled this and other cases like it?

Every Muslim, in this world of Islamophobia, is an ambassador of Islam and every non-Muslim can potentially convert to Islam. Shakespeare wrote:

In time we hate that which we often fear.

We can go blue in the face trying to convince the world that we are a religion of peace but how can we ever hope to convince anyone when our actions are so unforgiving and violent?

It should not fall upon the civilians of a country to enforce the law. That is the most egregious form of failure of the system. The result is total chaos as the power falls into manic and fanatical hands.

Who protects the weak? Who stands between the wolves and 11-year-old frightened little girls?

The sad part is that her only protection is not the law and the lawmakers but her neighbours who are questioning the accusations and have made a big enough fuss that the police have had to put the accuser into protective custody.

The fact that we have a constitution and a penal code, declares to the world that we are a country of laws. It says that we have rules and regulations that govern our behaviour; that we have a justice system that decides who is right and who is wrong. So, in an Islamic state, the problem may not lie in the law that protects the sanctity of the religion but in the actions of the law-keepers. All accusations should be followed with a comprehensive investigation. All investigations should be followed with a fair trial.

Accusations of a rabid crowd should not be taken as a verdict; not in a benevolent Muslim country governed by the laws of the Holy Quran.