How Islamic Is Instant Triple Talaq? 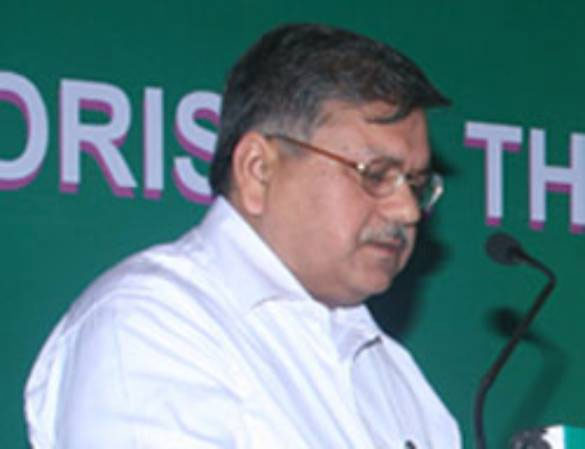 The Hon’ble Supreme Court has done well to delink the issue of instant divorce among Muslims from the larger question of a common civil code. This brings the focus back to the vexed issue and stops the All India Muslim Personal Law Board (AIMPLB) from obfuscating it to garner Muslim support.

Many ordinary Muslims, including women, are unaware of Islamic jurisprudence, so think that this is a universally accepted religious dogma which they must support. This misunderstanding emanates from the unity displayed by Indian Ulema of all sects on their male chauvinist “rights” to treat their wives as slaves. 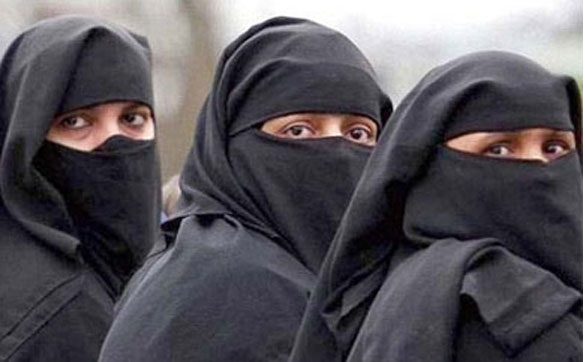 While ulema keep fighting among themselves on minor theological differences, there is perfect unity on this issue. Even ulema whose school of thought does not allow this evil practice support AIMPLB’s un-Islamic position. Ahl-e-Hadithis, for instance, follow Hanbali Law and, like Saudis, do not accept triple talaq in one sitting as valid. But the general secretary of the Ahl-e-Hadith, Maulana Asghar Ali Imam Mehdi is adamant that “the Centre and the courts should not interfere in personal matters of religion.” Same is the case of Maulana Kalbe Sadiq, renowned Shia Muslim cleric and vice-president of the (AIMPLB). The Ja’fri school of thought that Shias follow invalidates the practice of instant triple talaq. 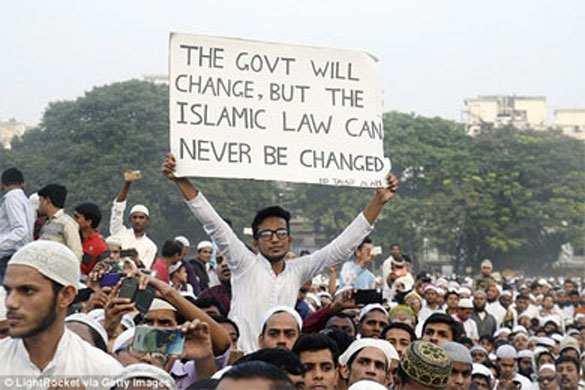 A man in West Bengal raises a sign against the ban on triple talaq: The All India Muslim Personal Law Board decided to oppose Union Governments initiative against the triple talaq and the imposition of Uniform Civil Code in the country.

Shias themselves do not practice it. Maulana Sadiq advises Sunnis to rethink the issue, but remains with AIMPLB that endorsed Triple Talaq in its counter affidavit to the Supreme Court.

Other prominent Muslim clergymen in India also take this self-contradictory position. Maulana Abdul Hameed Nomani, of Jamiat-ul-Ulema, for instance, admitted in a TV discussion: “Imam Abu Hanifa has gone to the extent of saying that “Jis Ne Ye Kaam Kiya Wo Haram Fail Ka Murtakib Hua,” meaning whoever does this has committed a haram (forbidden) act.

Imam Abu Hanifa is the founder of the Hanafi school of thought that most Muslims of the Indian sub-continent follow. He considers triple talaq a haram act. No wonder, immediately after its creation Pakistan took steps to abolish the practice, along with other un-Islamic practices in the Anglo-Mohammedan Law that still goes by the name of Muslim Personal Law in India.

AIMPLB’s own position is no less self-contradictory, and is indeed quite bizarre.  While endorsing it, it also calls instant triple talaq an abhorrent and prohibited practice. Its law book Majmooa-e-Qawaneen Islami, says in Article (267):

Talaq-e-bidat (the hateful, un-Quranic way of giving talaq i.e. triple talaq in one sitting) is prohibited [mamnoo’]; however, if one does give such a talaq-e-bidat, the talaq will be valid, and the talaq-giver will be sinful.”

Article 269 of the Qawaneen, however, takes the cake. As an average Muslim understands, in Islam intention is all-important. So much so, that when a Muslim stands up for prayer, it’s not considered enough that he is doing everything that is done in prayer. He has to specifically state that he intends to pray. Now read what AIMPLB’s law book says in the matter of triple talaq:

“Talaq-e-Sareeh i.e. Talaq by using clear and plain words effect divorce whether one intends divorce by them or not.”

It must have been based on this that the Deobandi fatwa told a young Muslim husband that even if you wrote the word talaq thrice in jest while chatting playfully with your newly wedded wife online, your divorce is final and you cannot remarry her unless your wife performs halala, that is, marries someone else, consummates her marriage, sleeps with the new spurious husband for a few nights, and gets a divorce from him later. 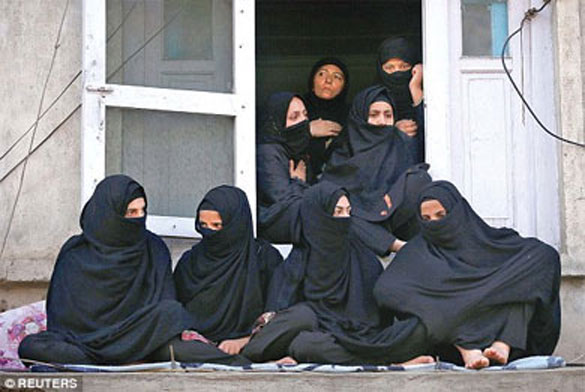 Halala is the most obscene social practice among Indian Muslims which has the blessings of all sections of Ulema. This practice will be automatically eliminated if triple talaq is abolished or three talaqs uttered in one session are considered as one Quranic talaq, as is done in 22 Muslim countries including Saudi Arabia, Pakistan, Bangladesh, Egypt, Syria, Jordan, Iraq, Sudan, Morocco, Kuwait, Yemen, Afghanistan, Libya, Kuwait, Qatar, Bahrain, and the United Arab Emirates.

Even Sri Lanka with less than 10 per cent of Muslims in its population, has managed to reform Muslim Personal law and make it more gender just. India alone has been unable to move forward.

As the practice of instant triple Talaq is still followed in India, the most pertinent example to give from Pakistan’s Muslim Family Laws Ordinance, 1961, will be this section dealing with divorce:

(1) Any man who wishes to divorce his wife shall, as soon as may be after the pronouncement of talaq in any form whatsoever, give the chairman a notice in writing of his having done so, and shall supply a copy thereof to the wife.

(3) Save as provided in sub-section (5) talaq, unless revoked earlier, expressly or otherwise, shall not be effective until the expiration of ninety days from day on which notice under subsection (1) is delivered to the Chairman.

(5) If the wife be pregnant at the time talaq is pronounced, talaq shall not be effective until the period mentioned in Sub-section (3) or the pregnancy, whichever later, ends.

(6) Nothing shall debar a wife whose marriage has been terminated by talaq effective under his section from remarrying the same husband, without an intervening marriage with a third person, unless such termination is for the third time so effective.

If the government keeps waiting for approval of Ulema, it is never going to happen. Ulema are not going to accept Quran as their guide anytime soon. For them Sharia with 90 percent of its rules based on Arab tribal customs is the source of legislation. They call Sharia divine, even though it was first codified 120 years after the demise of the Prophet (pbuh) and has been changing since from time to time and place to place. All hope now lies with the Supreme Court.

This article appeared first in Mail Today on o1 March 2017