Islam does not Prescribe Any Punishment for Apostasy: Muhammad Yunus Defends his Contention

In Defense of the earlier article: “Any punishment for apostasy – let alone capital punishment is anti-Islamic”

The verses and explanations furnished in this article are sourced entirely from a recent exegetic (tafsir) work (Essential Message of Islam), (Essential Message of Islam), this writer authored jointly with Ashfaque Ullah Syed, each having spent more than 15 years on the project – albeit in their after-office hours as they both have been corporate executives. The defense of the article can be established by demonstrating i) the level of scholarly screening of the sourced text, ii) the preference level of the methodology of interpretation iii) appropriate level of its endorsement and authentication iv) integrity of compliance with the sourced text in framing the article. These are tabled below by quoting from the sourced text.

The screening prior to the publication of the book

“Professor Muhammad Abulaylah of al-Azhar University - whom one of the authors personally met in Cairo (1997) with the first English draft, insisted on the need to attaining a high level of perfection. His suggestions precipitated in the deletion of some superfluous commentaries leading to a consolidation and improvement of the work, which in the initial stage lacked focus and scholarship. Sheikh al-Saeed Gharseldin of al-Azhar Academy (Canada) presented the improved draft to the office of Sheikh al-Azhar (1999), Cairo and actively helped its subsequent improvement, and inclusion of the Arabic script, through to its authentication and approval to proceed with the publication (2002). Dr. Louay Safi, Director of Publications of the International Institute of Islamic thoughts, supported the work and offered to sponsor its publication if required (2003).”

Dr. Khaled Abou El Fadl “personally edited the first four chapters of the draft manuscript in long hand, assisted with taped commentaries (2004, 2009) on some salient features of the Prophet’s mission and Islamic Law. Dr. Fadl also appointed an editor, Afra Jalabi, a Syrian born, Western educated upcoming scholar of Islam, settled in Canada (2006). Fluent and scholarly in both English and Arabic and knowledgeable in the Qur’an which she teaches to international students, she went through the MS back-to-back and made many corrections, refinements, commentaries, and suggested a reorganization of chapters as now adopted in this book.” (Extracted from p. xxxi/xxxii, Acknowledgment)

The preference level of the methodology of interpretation

“This book attempts to interpret the various facets of the Qur’anic message by drawing explanations primarily from its (the Qur’an’s) own text. Thus, the meanings of the critical words, idioms, figures of speech, and phrases of the Qur’an have been derived from their usage across its text. Likewise, the Qur’anic illustrations are used, where needed to interpret and explain its critical verses. Likewise, the essence of its guidance and the criteria of right and wrong, permissible and forbidden have been derived primarily from its own illustrations to provide the reader with a broad moral trajectory of the Qur’an.

The work is thus designed to eliminate the influence of the personal, educational, and doctrinal backgrounds of its authors and their choice of source materials. This is consistent with the Qur’an’s claim of representing the best interpretation.22 Accordingly, many Qur’anic scholars have advocated it since the early centuries of Islam. However, it never gained popularity, first because the orthodoxy was fully satisfied with the traditional exegetic discipline, and secondly because this approach is inherently more difficult and challenging than the classical exegesis. The long-outstanding need for a clear understanding of the essential message of Islam, independent of personal exegetic influences, and the scope of using computer database for the comprehensive and accurate scrutiny of the Qur’anic text, as adopted in this work, provide the impetus and background for the compilation of this volume.” (p. xxxix/iv)

Endorsements by the highest echelon of Islamic scholarship:

“For those who have the moral will, the book I introduce here will prove to be an invaluable reference source on the Islamic faith.  For those who do not wish to be participants in the perpetuation of religious bigotry and hate, this book will provide an accurate, thoughtful, and reliable introduction to Muslim beliefs and practices.  I wish we lived in a world in which this book would become a standard reference source for students of religion who are interested in an accurate introduction to the religion of Islam.  The best thing I can say about this book is that it is the product of a labor of love that lasted for more than a decade.  The authors do not offer a personalized view of their own religiosity; they explain in a very straightforward and accessible fashion what mainstream Muslims believe in and especially, what the Qur’an itself teaches.  Non-Muslims will understand why well over a billion people call themselves Muslim and also how Islam inspires Muslims to deal with and improve upon the world in which they live.  Indeed this book manages to translate the Muslim vision or the way that Islam heals the ailments of humanity in the current age and every age.  Readers who wish to learn the theological and moral dogma of Islam will find this book indispensable.  But this book is not just an informative tool for the fair-minded and interested reader.  This book is an educational tool for both Muslims and non-Muslims—it is an authoritatively reliable text to teach young Muslims, or even Muslims who never had the time to study the Qur’an, or the fundamentals of their religion.  The book is written with the kind of balance and fair mindedness that makes it equally valuable for Muslim and non-Muslim students of Islam.  The least I can say about this text is that it was written by two ethically conscientious and principled Muslims in order to share their religion with every ethically conscientious and principled reader in the world.  They must be heard. 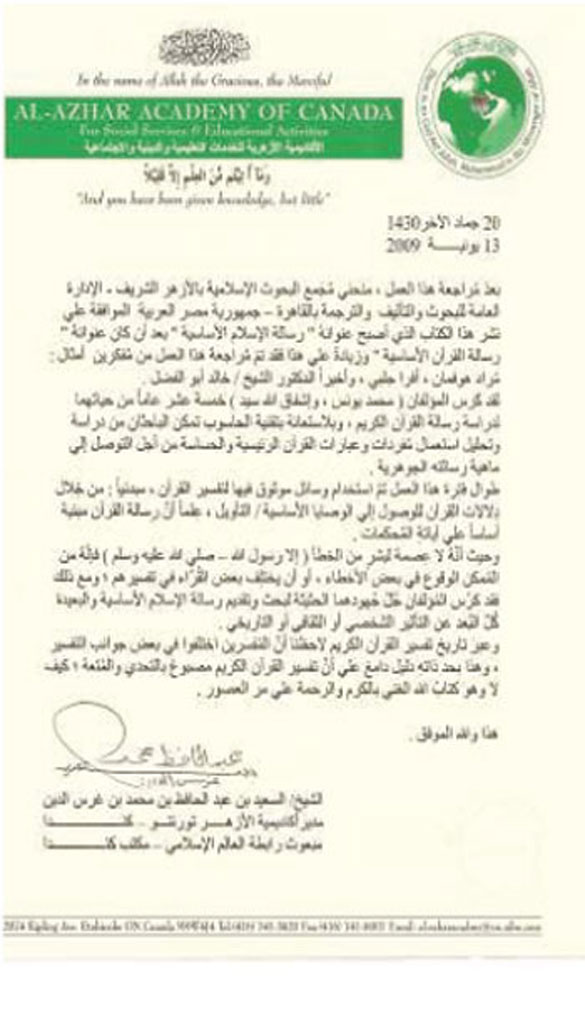 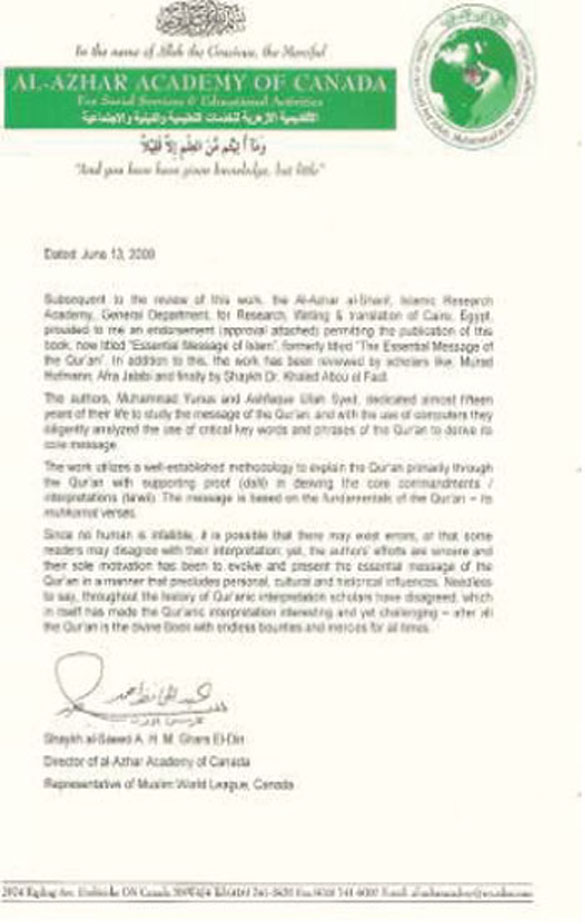 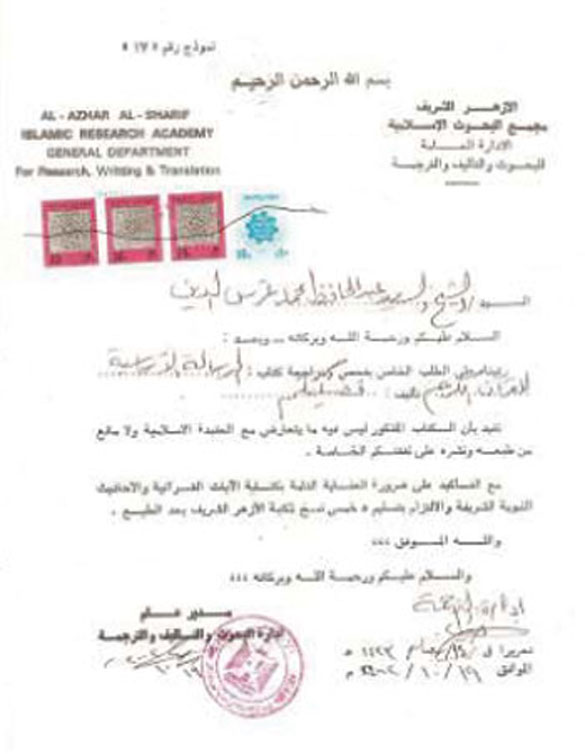 Authored by Ashfaque Ullah Syed & Muhammad Yunus, we believe that the mentioned book has no conflict with Islamic faith (Aqeedah). There is no reason to stop publishing it at your expense.

We strongly recommend that you be very careful in writing the Qur'an Verses (Aayat) and Hadith. You are also committed to provide our library with 5 copies upon publishing.

We wish you all the success from Allah.

Extracts from the sourced text (Essential Message of the Qur’an) juxtaposed as appropriate to produce the article.

“The Qur’an uses the word Islam (root – SLM) in noun and verb forms with the connotation of orienting, submitting, surrendering, or committing oneself to God or to be at peace with God.2 The Qur’an further declares:

“Indeed! Whoever commits (asslama) his whole being [lit., face] to God, and does good deeds - will get his reward from his Lord. There will be no fear upon them nor shall they grieve.” (2:112).

“And who can be better in faith (din) than the one who orients (asslama) his whole being [Lit., face] to God, and does good deeds, and follows the way of Abraham, the upright one, and God took Abraham as a friend” (4:125).

In these verses, the Qur’an attributes the quality of doing good deeds to those who submit, or orient themselves to God (asslama, Muslim).

7.1 Service to humanity as the essence of din al-Islam

Combining the foregoing underlined Qur’anic notions of i) din (primarily as obedience or devotion), and ii) the verb and noun forms of Islam (asslama, Muslim), din al-Islam may be connoted with a faith system that calls for orienting oneself (asslama) to God for the doing of good deeds, or serving humanity. Accordingly the Qur’an describes ‘din al-Islam’, as the universal faith that was enjoined on earlier prophets, who were all true Muslims (2:131-133),3 and conveyed the same essential message.

“When his Lord said to him (Abraham), ‘Submit (aslim)’, he said, ‘I submit (aslamtu) to the Lord of the worlds’ (2:131). Abraham enjoined his sons to do so, as did Jacob: ‘O my sons, God has chosen the religion (din) for you; so you should not die unless you have submitted (Muslimun)’ (132). Were you witnesses when death came to Jacob? He said to his sons, ‘What will you serve after I am gone?’ They said, ‘We will serve your God; the God of your fathers, Abraham, Ishmael, and Isaac - the One God; and to Him we have truly submitted (Muslimun)’” (2:133).

“(There is) no compulsion in religion. Truth stands out clearly from falsehood; so whoever rejects false deities and believes in God, has grasped a firm handhold, which never breaks. (Remember,) God is All-Knowing and Aware” (2:256).

“If your Lord so willed, everyone on earth would have believed, all together. Will you then compel people until they become believers” (10:99)?

The Qur’an’s position on religious freedom is amply demonstrated in a verse (60:11) dating from the Medinite period allowing pagan women to leave for Mecca, if they did not opt to convert to Islam along with their husbands:

“And if any of your wives should go over to the pagans, and then you have your turn (as many converted wives of the Meccan pagans left their pagan husbands and came over to Medina), then pay to those whose wives had left the equivalent of what they had spent (on their dower). And heed God in Whom you believe” (60:11).

“…Their deeds will be of no avail in this life, or in the hereafter; and they will be the inmates of hellfire and they will remain there” (2:217).

The Qur’an offers further illustrations against any temporal punishment for apostasy:

It does not prescribe any punishment for a person “who believes, rejects faith and then believes (again), and again rejects faith, and goes on increasing in unbelief.”8

It does not prescribe any punishment for the women who left their Muslim husbands during the Medinite period, and went over to the disbelievers renouncing their faith.9

It assures Muslims that “if anyone abandons his religion, God will replace him with others whom He loves and who love Him.”10

Thus there is no Qur’anic basis to legislate capital punishment, or, for that matter, any punishment for apostasy.

In the historical perspective, apostates joined the enemy and conspired against the Muslims, thus committing high treason; so the punishment for apostasy was in true sense the punishment for treason rather than for abandoning faith.”

Conclusion: The article is in complete agreement with the interpretations tabled in the said exegetic resource reproduced above, and since the latter is the result of a combined effort of the author and the co-author for fifteen years of in-depth Qur’anic probe and theological studies, and received inputs from some of the eminent scholars of the era culminating in endorsement by the highest office of Sunni Islam, Al-Azhar al-Sharif and unqualified endorsement by one of the foremost jurists of the era, Dr. Khaled Abou El Fadl, the article stands as a duly authenticated Ijtihad document. This is not to suggest that the authors claim to be above any error. This point is made clear in the concluding paragraph of the letter dated June 13, 2009 of Al-Azhar Academy of Canada attached above. However, given that the methodology adopted (explaining the Qur’an primarily through the Qur’an) is regarded as ‘the best tafsir” [1], and the Qur’an itself claims to represent its own ‘best explanation’ (25:33), the Ijtihad expounded in the article also bears a distinctive seal of authenticity and can be used as a basis to review traditional notions based primarily on traditional exegesis.

The article “Any punishment for apostasy – let alone capital punishment -- is anti-Islamic” is available at:

URL of this article: https://www.newageislam.com/islamic-sharia-laws/islam-does-not-prescribe-any-punishment-for-apostasy--muhammad-yunus-defends-his-contention/d/6026