The Fatwa against Women Touching Bananas and Other Stupid Islamic Orders

Did an Islamic cleric ban women from touching bananas and cucumbers? True or false, Asra Q. Nomani writes, fatwas have become ridiculous. See her list of the 10 most outrageous ones.

There is an interesting headline moving through Muslim community listservs: "Did an Islamic cleric really ban women from touching bananas and cucumbers?"

This past week, an email pinged around the world, claiming that a Muslim cleric "residing in Europe" issued a, well, interesting fatwa, or religious ruling, banning Muslim women from touching bananas or cucumbers: “He said that these fruits and vegetables ‘resemble the male penis’ and hence could arouse women or ‘make them think of sex,'" according to a report in a supposed Egyptian website, BikyaMasr. The Times of India ran the story: "Islamic cleric bans women from touching bananas."

"If women wish to eat these food items, a third party, preferably a male related to them such as their a father or husband, should cut the items into small pieces and serve," the cleric supposedly dictated.

It's hard to confirm that the fatwa is true, but the fact that we, in the Muslim community, would even think it's possible is a reflection of just how inane the phenomenon of fatwas has become in the Muslim community. The idea of the fatwa became notorious when an Iranian cleric called for the killing of author Salman Rushdie when he published the novel The Satanic Verses, about an erased portion in the Koran supposedly inspired by the Devil.

The fatwas used to carry the authority of divine ordination. But the years since have revealed that, indeed, there is nothing to fear—or revere—about the fatwa. In fact, nowadays, you can get a fatwa to validate any point you want to make. I call it "fatwa shopping." 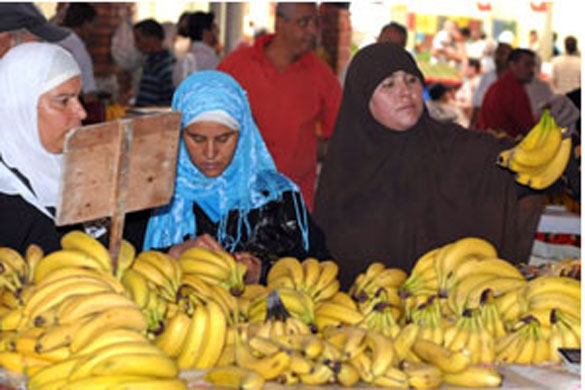 One American-Muslim blogger, Sheila Musaji, concluded the fatwa was "only shoddy reporting," but admitted there have been enough "stupid fatwas" to "make anything easy to believe." Another blogger tried to chase down the truth, writing: "That’s some pretty good flame-bait, but is it legit?" The BikyaMasr website credited "el-Senousa news," but the blogger wrote, "Good luck finding it," concluding that "the tale of the vegetable-fearing Mullah is starting to look a little short on authenticity."

Before the story became just another apocryphal tale like the ones that emerge from the Onion, the satire magazine that makes up news, the e-trail to the original story was clarified. Sunday, after unprecedented attention to the bikyamasr.com website, an email shot out from a man identifying himself as the site's editor, Joseph Mayton, apologizing for the mix-up, correcting the original Egyptian media outlet that reported the "cucumber sheikh" as www.assawsana.com and linking to the original story in Arabic. In an editorial, Mayton said that "the article should not have run when it did. Arguably, it should not have been run at all." Most importantly, lest we wonder, bikyamasr.com ran an important follow-up story, "Cucumber sheikh 'far from the truth,' says Egypt Islamic leader," Sheikh Gaber Taye’ Youssef, chairman of Egypt's Religious Endowments Ministry—no pun intended, of course. The Islamic scholar was quoted saying, "God says in the Holy Qur’an ‘eat and drink from what we have granted you.'"

Nowadays, you can get a fatwa to validate any point you want to make. I call it "fatwa shopping."

True or not, the possibility of such a fatwa underscores the long Ridiculist of fatwas, to borrow CNN host Anderson Cooper's nightly feature of news stories of the absurd. "That cleric is an idiot," one Muslim wrote. "But what am I going to do now? I eat lots of bananas because I am vegetarian," wrote Farzana Hassan, a progressive Canadian-Muslim leader.

In our Muslim community, we've had enough comic fatwas to create our own Fatwa Ridiculist. Some of my nominees:

1. A man can work with a woman to whom he's not a brother, father, uncle, or son, if he drinks her breast milk first.

4. Mickey Mouse is a corrupting influence and must die.

7. A husband and wife can't have sex naked.

8. Pokémon is as bad as Mickey Mouse.

To all of this I have only one thing to say: Please pass the banana split. :P

Asra Q. Nomani is the author of Standing Alone: An American Woman's Struggle for the Soul of Islam. She is co-director of the Pearl Project, an investigation into the murder of Wall Street Journal reporter Daniel Pearl. Her activism for women's rights at her mosque in West Virginia is the subject of a PBS documentary, The Mosque in Morgantown. She recently published a monograph, Milestones for a Spiritual Jihad: Toward an Islam of Grace. Source: The Daily Beast