Is Islam A Complicated And Difficult To Follow Religion?

Many consider Islam a complicated and difficult to follow religion. This feeling perhaps emanates from the fact that there are thousands of books interpreting the holy Quran and Hadith. Seerat books, describing events in Prophet's life are similarly in tens of thousands. More confusing are the hundreds of books describing various aspects of Islamic rituals dealing with every aspect of Prayers, Fasting. There are even sectarian divisions on account of some of these mindless controversies about slightest differences in how to perform these rituals  There are entire libraries describing controversies over the slightest step a Muslim is supposed to take even in terms of ablution, washing his hand or feet or cleaning his body parts after easing himself. Sitting in these libraries it would appear that Muslims are some sort of machines without a mind of their own who need  to be programmed with minute codes for every little movement of their body parts, and of course there need be a prayer said before every twitching of a muscle.

But of course this is not the case. Islam is a simple and easy religion. It provides a system of life, codes, and conducts, which is in complete harmony with the requirements of Nature, where a Muslim can live in obedience to Islam and its guidelines. All its rules, whether they are related to ritual acts such as Salah (prayer/Namaz), Hajj (pilgrimage), Zakat (charity), or Mu’amalat such as social transaction and relation. For being a Muslim, you are not obligated to become an extremist or radical, or so-called Jihadist. You, being a Muslim, can peacefully exist with any human being, in any country today, regardless of religion, caste, culture, and nation. You are not bound to hate anyone simple because you are a Muslim.

The rules of Islam are not narrow and painful. They are easy to implement. The Law-giver, that is, Allah Almighty has created ease in every religious issue related to obligations (faraiz) and compulsory acts (Wajibat) or Mubah or permissible things. All the rules and guidelines are to be maintained as per one’s capability. For example, in the state of travel, you are obligated to shorten the prayer. During illness, you can leave the fasts of Ramadan, and keep the missed fasts after recovery. If you are unable to perform Hajj due to financial reasons, you are not obligated to go for Hajj. Similarly in all other acts, the divine rules of concession and convenience are obvious to save Muslims from trouble and hardship. 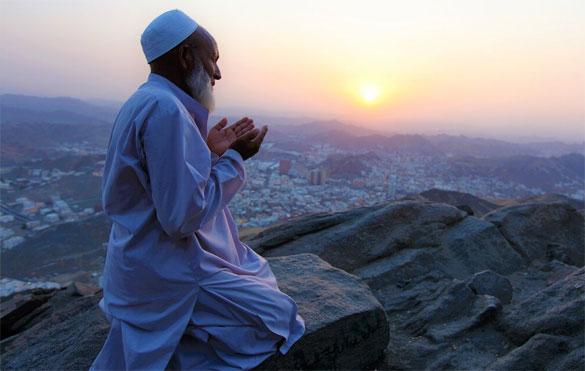 Allah Almighty says in the Quran,

2.       “And (Allah) has not placed upon you in the religion any difficulty. [It is] the religion of your father, Abraham. Allah named you "Muslims" before [in former scriptures] and in this [revelation] that the Messenger may be a witness over you and you may be witnesses over the people.”

5.       “And who (the Prophet) makes lawful for them the good things and prohibits for them the evil and relieves them of their burden and the shackles which were upon them.” (7:157)

All the aforementioned verses of the Quran clearly prove that there is ease for all people in the Religion of Islam. This is the divine plan meant to save them from difficulty and make the Religion easy and practicable.

The subject of easiness and concession has also been stated in the several Ahadith (pl. of hadith).

The holy Prophet (peace and blessings of Allah be upon him) said,

1.       Hazrat 'Aishah (May Allah be pleased with her) reported: Whenever the Prophet (peace be upon him) was given a choice between two matters, he would (always) choose the easier as long as it was not sinful to do so; but if it was sinful he was most strict in avoiding it. He never took revenge upon anybody for his own sake; but when Allah's Legal Bindings were outraged, he would take revenge for Allah's sake. (Al- Bukhari and Muslim]

2.       Hazrat Ibn 'Umar narrated that Allah's Messenger (peace be upon him) said: "Allah Almighty loves that His permissions be practiced, just as He loves that His duties be observed" [Bulugh al-Maram, Hadith 432, Tabarani al-Mu’jam al-Awsat 8/82, Hadith 8032]

3.       The Prophet (peace be upon him) is reported to have said, "The religion (of Islam) is easy, and whoever makes the religion a rigour, it will overpower him. So, follow a middle course (in worship); if you can't do this, do something near to it and give glad tidings and seek help (of Allah) at morn and at dusk and some part of the night". [Al-Bukhari]

4.       Abu Burda narrated that when the Prophet sent his grandfather Abu Musa and Mu'adh to Yemen he said, “Make things easy and do not make them difficult; gladden and do not scare; comply with one another and do not disagree.” (Bukhari and Muslim)

6.       A Bedouin urinated in the mosque and some people rushed to beat him up. The Prophet (peace be upon him) said: "Leave him alone and pour a bucket of water over it. You have been sent to make things easy and not to make them difficult." [Al-Bukhari]

All the above textual evidence (Nusus-e-Sharia) substantiates the fact that Islam is a simple and easy religion. However, unfortunately, some Muslims, including scholars, are subjected to a misconception that Islam is a very tough religion. This is completely in contradiction to what our Islam teaches us, as we have seen above.

This is the easiness of this religion that the Muslims are prohibited to adopt any tendency toward excessiveness. The prophet (peace be upon him) is reported to have said to his close companion (Sahabi) ‘Abdullah Ibn Amr, "I have been informed that you fast every day and pray every night (all the night). Fast (for some days) and give up fasting (for some days); pray and sleep, for your eyes have a right on you, and your body and your family (i.e. wife) have a right on you." (Bukhari, Book 30, Hadith 84). This hadith signifies that it is essential to maintain a balance or moderation when fulfilling the several obligations, between our obligations to Allah Almighty, our obligations to others, and to ourselves.

Here it should also be noted that one may say Islam is very hard to perform, as there is an obligation, such as prayer (salah/namaz), which is to be performed five times a day. But then how can Islam be a simple and easy religion? The simple answer is that it is not hard to perform prayer but for the people who are not humble in their obedience to God Almighty. The Quran beautifully clarifies this fact as follows;

“And seek help in patience (Sabr) and prayer (Namaz/Salah), and truly it is difficult except for those who prostrate before Me with sincerity” (2:45). The Arabic word ‘Khushu’ mentioned in this verse refers to ‘humbleness of heart’, ‘prostrating with sincerity’ etc. The humbleness of heart, once acquired, shows its spiritual fruitfulness in making obedience to Allah and submission to Him easy and pleasant for the believers.