They can be observed marching in the parade with Senegalese members of the Mouride order on Amadou Bamba day in Harlem. In Chicago, Black American members of the Haqqani Naqshbandi order can be seen wearing bright red turbans at the suggestion of their Turkish Cypriot spiritual guide, Shaykh Nazim al-Haqqani, who commented on the beautiful, “fiery” nature of Black spirituality1. nd, distinguished Muslim scholars like Ustadha Ieasha Prime and Imam Amin Muhammad connect spiritual seekers in the United States to the rich tradition of the Ba ‘Alawi order in Yemen, who helped spread Islam across the Indian Ocean.

There is also considerable evidence of Sufi practice among enslaved African Muslims in the Americas because Sufism was, and continues to be, a hallmark of the Muslim societies from which many were taken captive during the Transatlantic slave trade. 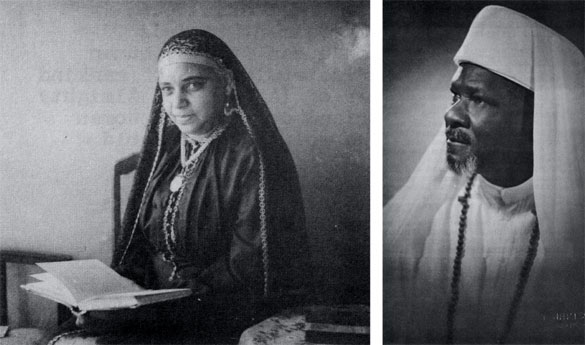 Mother Khadijah & Shaykh Daoud. From the digital archive of the estate of Imam Mohamed Kabbaj.

Although Sufism re-emerges in Black American Muslim communities during the early 20th century, in a number of contemporary Black Muslim communities, Sufis are viewed with suspicion. Part of the reason for this is the rise, during the 1990s, of a generation of Black American Muslims exposed to the Salafi movement through travel and increased access to English translations of religious literature exported from the Gulf Arab States. In particular, many young, Black American Muslim men who studied at the Islamic University of Medina in Saudi Arabia began teaching and prostelitising in major cities on the East Coast with considerable success. As a result of this rising Salafi influence, many became leery of Sufism and questioned its compatibility with orthodox Islam. This added to an earlier attitude of suspicion against Sufism and foreign Sufi Shaykhs that emerged among some Black American Muslims in the aftermath of the tumultuous fracture of the Darul Islam Movement (the Dar). Despite these dynamics, Sufism continues to be an integral part of orthodox Muslim religious life for those Black American Muslims who embrace it, and a testament to their desire for spiritual fulfilment and transformation. What follows is a brief overview of Black American Muslim engagement with Sufism during the 20th century.

Two of the most prominent pioneers of orthodox Islam in 20th century America were Shaykh Daoud Ahmed Faisal and Al-Hajj Wali Akram. I refer to these men as “orthodox” pioneers to align with the everyday language of many Black American Muslims during the early 20th century. At the time, Black American Muslims distinguished “orthodox” groups of Muslims from those that they considered heterodox, such as the Nation of Islam and the Moorish Science Temple, and were less likely to distinguish between “Sunni” and “Shi’a” Muslims.

Shaykh Daoud was born on the Caribbean island of Grenada in 1891. At the age of 21, he relocated to New York City to study music. In 1924, he married a Bermudan vocalist who later adopted the name Khadijah. By 1928, Shaykh Daoud had accepted Islam and opened the Islamic Propogation Society, one of the city’s first organizations founded for the purpose of promoting Islam. Together, Shaykh Daoud and Mother Khadijah founded a mosque called the Islamic Mission of America in Brooklyn in 1939. Shaykh Daoud joined the Shadhili order, possibly as early as the beginning of the same decade, and was likely introduced to it by Ethiopian and Somalian Muslims in Harlem in the 1930s.2 He deepened his connections to it through Yemeni Muslim merchant seamen who attended his Brooklyn mosque in the 1940s.

The many Arab, South Asian and East African merchant seaman who encountered the mosque spread word about Shaykh Daoud’s and Mother Khadijah’s efforts through a global network of Muslim seafaring workers, prompting others to visit his mosque when their ships docked at the nearby Brooklyn Bridge piers. Shaykh Daoud went on to become a muqaddam (an official representative) of the Shadhili order. According to one close friend and aide, Shaykh Daoud received a written authorization from the renowned Moroccan Sufi Shaykh Ahmed al ‘Alawi, which Shaykh Daoud used to carry with him inside his kufi.

Another giant of early 20th century orthodox Islam, Imam Al-Hajj Wali Akram, who founded the First Cleveland Mosque in 1937, introduced members of his congregation to the Chishti order during the 1950s. According to members of his family, Imam Akram embraced the order while traveling throughout the Arab World, South Asia and Eastern Europe after completing his celebrated pilgrimage to Mecca in 1957. Unlike Shaykh Daoud, whose Sufi affiliation was unknown to most members of his congregation, Al-Hajj Wali Akram held gatherings for the observance of the Chishti dhikr (devotional remembrance) in his mosque. This likely marks the first public Sufi gathering convened by Black American Muslims in a mosque during the 20th century. 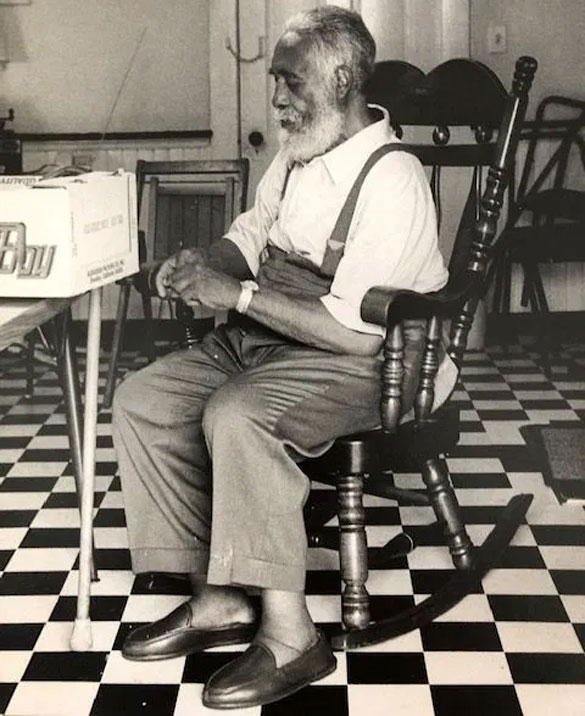 During the 1970s in New York City, three Black Muslim Sufi communities emerged that went on to amass a national following: the Tijaniyyah, Qadiriyyah and Burhaniyyah. These three groups provided many Black American Muslims with their first exposure to a traditional Sufi order. The first of these was the Tijani order. Many of the first Black American Tijanis came from the Mosque of Islamic Brotherhood (MIB) in Harlem and the Islamic Cultural Center of New York (ICC-NY) in Manhattan’s Upper West Side. Two of the earliest members were Imam Sayed Abdus-Salaam, co-founder and assistant Imam of MIB, and Hajjah Kareemah Abdul-Kareem, an attendee of ICC-NY who became prominent in the city’s Muslim community due to her philanthropy.3 They were introduced to the Tijani order by a young Senegalese religious scholar named Shaykh Hassan Cisse, who first visited the United States in 1975. Shaykh Hassan’s exceptional Islamic scholarship, fluency in English and pan-African political sensibility made him especially attractive to Black American orthodox Muslims interested in the legacy of Islam in West Africa.

In the subsequent decades, Shaykh Hassan emerged as the world’s preeminent representative of the Tijani order. But during the 1970s and early 1980s, while in the early stages of his career, he spent significant time with Black American adherents in New York City, Detroit and Chicago. He appointed dozens of Black Americans in various cities as Muqaddams of the Tijani order. As a result, the order took root in urban centres throughout the country, spreading to cities like Atlanta, Washington D.C., Cleveland and Denver, thus creating a distinctly Black American Sufi congregation. The Tijani order furthered its reach with the founding of the African American Islamic Institute in 1984, a Qur’an school in Senegal that hundreds of Black American Muslim children have attended.

In the latter part of the 1970s, some of the leaders of the Dar were introduced to the Qadiri order by Shaykh Mubarak Ali Gilani from Pakistan.4 The Dar was founded by Muslims who previously attended Shaykh Daoud’s and Mother Khadijah’s ethnically diverse mosque in Brooklyn and had learned about the history of Islam in South Asia from people like Hafiz Mahbub, a Pakistani Qur’an teacher who served that community. In addition, Imam Yahya Abdul-Kareem, the Imam of Ya-Sin Mosque in Brooklyn (the Dar’s headquarters) exhibited an interest in Qadiri texts as early as the 1960s. He and other members of the congregation became formal adherents of the Qadiri order upon encountering Shaykh Gilani, who visited the United States in 1978. Shaykh Gilani’s knowledge of African Diasporic history and his criticism of Western imperial domination of majority-Muslim countries contributed to his appeal among members of the Dar — a community characterized by its zeal for Islam and its rejection of Western, secular, white supremicist cultural norms.

However, some members were distrustful of Shaykh Gilani and opposed the idea that their predominantly Black and Latino Muslim congregation should defer to a foreign religious leader. Subsequently, during the early 1980s, the Dar effectively split into two communities. The contingent that embraced Shaykh Gilani’s leadership and his approach to Sufism formed the Jama’at al-Fuqrah (currently known as The Muslims of America, Inc.), which established rural Muslim settlements around the United States. that are still active today.

The third community to emerge during this period was the Burhani order. In 1973, a Black American Muslim named Shaykh Abdullah Awadallah travelled to Sudan. One of his traveling companions was the infamous Malachi York, then known as Imam Isa. Upon their return, York established his Ansar Allah community, a heterodox Islamic congregation that incorporated aspects of the Sudanese Sufi tradition along with an eclectic mix of beliefs and practices.5 Shaykh Awadallah, on the other hand, maintained a commitment to Sunni Islam and cultivated a relationship with Shaykh Muhammad Osman Abdel Burhani, a well-known spiritual guide he met in Sudan who then designated Shaykh Awadallah as his American Muqaddam during the late 1970s. Shaykh Awadallah set up a Zawiya (a community worship space) in the Bronx that held dhikr regularly. 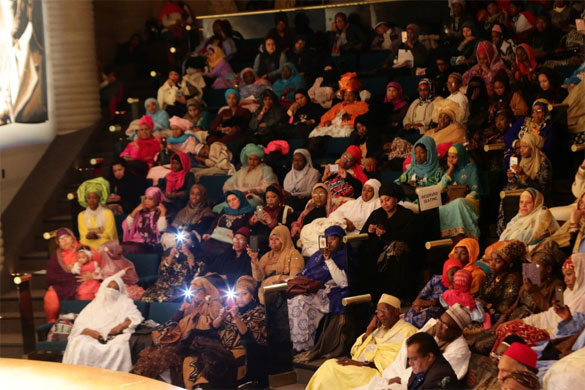 From the 1980s onward, increasing numbers of Black American Muslims throughout the United States became interested in other Sufi orders on the African continent. For instance, during the 1990s, many Black American Muslims learned about the famed precolonial Nigerian scholar, political leader, and Sufi guide, Shehu Usman Dan Fodio. They ultimately formed the Jama’at of the Shehu, and embraced the leadership of his descendants and spiritual heirs in Sudan. This increased awareness of the legacy of the Shehu was due, in large part, to the efforts of an African American Muslim named Shaykh Muhammad Shareef bin Farid, founder of the Sankore Institute of Islamic-African Studies. A prolific translator, he made scores of works authored by the Shehu and other scholars associated with him available to the public in English.

Of course, Black American Muslims can be found in many more Sufi orders than these. They continue to forge substantive transnational relationships by participating in global Sufi networks, while simultaneously using the lessons of the Sufi tradition to address their local communities’ needs. Today, Black American Muslims explore the wisdom of famous Sufi sages mentioned on the pages of history who hail from every corner of the globe. Yet, it remains important to tell the local histories of our Black American Muslim foremothers and forefathers who engaged Sufism because they can grant us access to a unique kind of wisdom — one that can help us navigate the ideological differences that divide Muslim communities in the United States, and around the world, and how to harness Islam’s transformative potential in our own context. 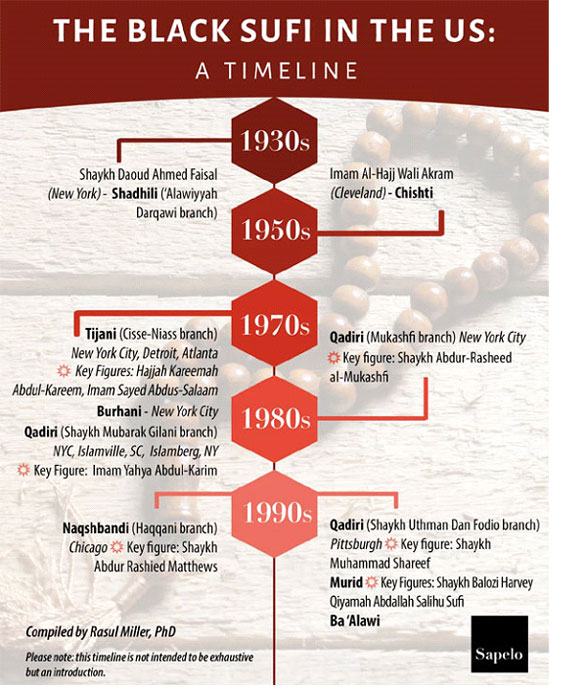 Rasul Miller is a historian of Black Muslim communities in the Atlantic World. He received his PhD in History and Africana Studies from the University of Pennsylvania. His research interests include Muslim movements in 20th century America and their relationship to Black Internationalism and West African intellectual history. He currently serves as a Postdoctoral Associate in the study of the Racialization of Islam at Yale University’s Centre for the Study of  Race, Indigeneity, and Transnational Migration.