With Sadia Dehlvi Ends an Era of Tehzeeb And Adab

How does one write the obituary of a dear friend? A friend that one had thought one would grow old with, nodding by the fireside, talking about grandchildren? How does one suddenly start talking about her in the past tense even though one has known for some time that the adversary she was battling was a cruel and relentless one? How easy and facile it seems to say, “Rest in Peace” or “Go gently into the night” when you know she was raging, raging to stay alive, that she still had miles to go before she could sleep. 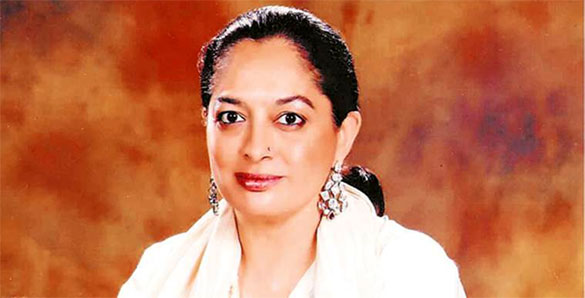 Dehlvi was also a close friend of celebrated author Khushwant Singh, who dedicated his book “Not a Nice Man to Know” to her. (File)

Sadia Dehlvi, daughter of the famous first family of modern Urdu journalism represented by the Shama group of magazines, passed away Wednesday night after a long and brave fight with cancer. Her father Yunus Dehlvi was once single-handedly responsible for the success of magazines such as Shama, Sushma, Bano, Khilauna, and a host of others which were collectively responsible for taking Urdu writings to the nooks and crannies of the popular imagination. Inviting literary stalwarts such as Krishan Chander, Ismat Chughtai, Rajinder Singh Bedi and others to write alongside more popular writers and the occasional columns by film stars such as Nargis and Meena Kumari, he had blurred the distinction between popular and pedestrian. Proving that popular digests need not cater to the lowest common denominator, Yunus Dehlvi pioneered a new kind of Urdu journalism.

Following in his footsteps, Sadia tried to keep alive her family’s flagging enterprise by editing Bano. But declining revenues, dwindling Urdu readerships and the overall decay of Urdu journalism nibbled away at her valiant efforts. With the family home, Shama Kothi, gone and with it an entire way of life, Sadia continued to dabble in journalism by writing columns and television serials (and also occasionally facing the camera) and speaking up about different aspects of her beloved city, its food, culture, language, manners and mores. Passionate about food and born to a family that prided itself in running the most fastidious of kitchens, Sadia evolved into a fine cook herself. Her Dastarkhwans acquired near legendary status among her vast and eclectic circle of friends and her Aloo-Gosht Ka Salan, Khili Hui Maash Ki Dal and nihari deserving of a trademark!

Always a great hostess, gourmand and raconteur, possibly her true calling was as a writer whose work increasingly began to focus on faith, culture and women. One also saw and heard her on television debates, as the lone voice of sanity and calm among the vociferous talking-heads, talking of peace and reconciliation, rather than confrontation and aggression, in her characteristic unhurried manner. Over the past decade she went on to write three well-received books — Sufism: The Heart of Islam; The Sufi Courtyard: Dargahs of Delhi; and Jasmine and Jinns: Memories and Recipes of My Delhi.

Full of life, fond of vivid colours, deeply reflective yet brimming over with vim and vigour, Sadia took the news of her illness with characteristic stoicism and dignity. Already at the fourth stage when detected, the cancer had spread by the time her treatment began. Yet she took two long and painful courses of chemotherapy with her quiet courage and never gave up hope that modern medicine and faith would buy her some time. The end when it came was as she would have wanted — back home from a stint in the hospital, in her own home with her beloved son Armaan beside her. It is entirely appropriate that this bright sparkling woman, who revelled in her appropriation of Delhi in every conceivable way, should be laid to rest in the dust of her beloved city in her family graveyard at Shidipura near the Idgah.

With Sadia gone an era ends, an era of graciousness and hospitality, charm and good manners and, yes, one that was redolent with old-world Tehzeeb and Adab. The Shama of Dehli has been dimmed, its flame flickering: Daagh-E-Firaq-E-Sohbat-E-Shab Ki Jali Hui/Ik Shama Rah Gai Hai So Woh Bhi Khamosh Hai (Stained by the scar of separation in the company of the night/Only one candle remained lit, and that too has fallen silent).