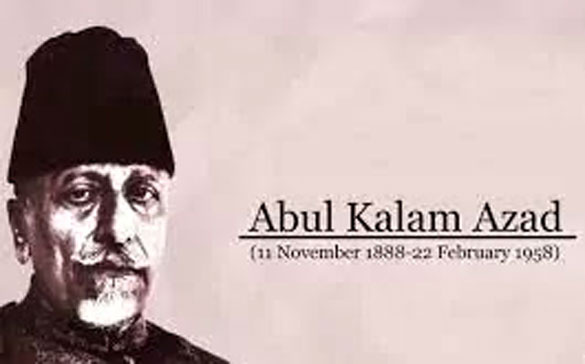 Height about 5’ 5’’; exceptionally thin; noticeably fair; age about 33 years; has practically no hair on his face though he does not shave; long sharp face with prominent nose. This is the “official” description of Maulana Abul Kalam Azad, the golden boy of the Independence struggle. With his confidence, charm and sincerity, Azad impressed people of his age group with his sharp and swift mind. Later in years, he especially cultivated a look of venerable age to give a suitable background to his learning. His genius and method were too individual to found a school, but his writings and lectures exerted a profound influence owing to the breadth of view and patient learning. Rajaji described him as ‘The Great Akbar of Today’.

The study of Azad’s early life is, however, hampered by a deficiency of data. But there is ample evidence to indicate his discomfort with the traditional order of things. This was enough to rouse his scorn. So is his unease with taqlid or conformity. Is Islamic doctrine so rigid and dogmatic that it leaves no room for intellectual creativity? With this bent of mind, he broke off the shackles of fossilised theology, and critiqued all those elements in theology that inhibited the progress of empirical science and the unlimited process of their utilisation. His views on the spread of a materialistic way of life and the stagnation and retardation of religious life became well-known, but this phase in his life — when he “saw in religion only ignorance” — proved to be momentary. Once he regained his faith, he worked out a synthesis between the reformist and orthodox philosophies. He did not go too far in this journey, but went far enough to disturb the status quo.

The awakening at Aligarh’s M.A.O. College fostered ideas on reforms, interpretation, and innovation among the Muslim intelligentsia. Syed Ahmad Khan moulded young Azad’s thinking. He did his very best to read his writings and admired them. He also admired Shibli Nomani, founder of the Nadwat al-Ulema in Lucknow. And when the Nadwa Aalim turned pan-Islamist after the European intervention in the Balkan States, Azad too stressed that the bonding with the Turks was unique insofar as they were a part of the Islamic community as well as its last political centre.

One has only to cast a glance at some of Azad’s early writings to realise that he entered the valley of doubts and uncertainties to demolish the suppositions that had guided theologians. He opposed the ‘scripturalists’ or the ‘literalists,’ because they advocated rigid adherence to the fundamentals of Islam, as literally interpreted from the Koran and the Sunna. His interest in the externals of religion, too, diminished. At the same time, he was consistent in his authentic inward piety. Just as he was ready to comprehend the whole Koran within the verses of the first Surah, so he conceived and pursued the politics of Islam within the Koran’s dimension of piety.

The Muslim communities were divided by geographical situation, by differences of dialect and custom and, in some cases, by the deeper chasm of sectarianism, but pan-Islamism inflamed their passions, a feeling that, although they had been ground down under the wheels of history, they thought of themselves as a mighty society spread worldwide. Azad, for one, was attached to the common inheritance of Islamic culture and explored the treasures of thought and emotion which belonged to the Umma. He proceeded naturally from the conviction that education, liberalism and faith in progress were requisites for Muslim empowerment.

Setting a great example of moral leadership during World War I, Azad became the soul of the Congress party. He opposed Partition heart and soul, while a great body of his compatriots clamoured for a Muslim nation. He could not conceal the contempt that he felt for them, and at no stage in his public career did he stoop to compromise. The spectacle of Indians working out a new way of life and boldly defying the accumulated prejudices and animus of the past was one which aroused his interest and curiosity. Without looking around to find a mirror that might reflect radical faces, he identified pluralism to be the weapon of the strong and the weak against the British. He preferred the conviction of Dara Shikoh, the eldest Mughal prince and a victim of Aurangzeb’s conspiracy, that in the search for the ultimate Truth, mosques as well as temples validly mediate the one candle’s light.

Azad’s greatest gift was to postulate an equation between Islam and Indian nationalism on the one hand, and between Islam and the universal principles, on the other. He did so to enlarge our conception of what is possible, enrich our intellectual imagination, and diminish dogmatism which closes the mind to Ijtehad. With his belief in an integrated, harmonious and creative Islam, he adumbrated the outlook of a religious humanist, very much in the line of the humanism embodied in the classical Persian Sufi poetical tradition. He envisaged an Islam not of sectarian belligerence but of confident partnership in a cultural and spiritual diversity where a strident divisiveness would be its betrayal.

Maulana Abul Kalam Azad, Minister of Education in free India and sponsor of an ‘official’ history of the 1857 Rebellion, referred to the two communities standing ‘shoulder to shoulder’ to liberate themselves from the British yoke. Why did Azad and others think that it was worth their while to make this point? Probably, to record the regret that “the British swept away and rooted out the late Mughals’ pluralistic and philosophically composite nationalism,” and to bemoan that they ensured that common action by Hindus and Muslims would in future not be accomplished easily.

Shakespeare’s view of life in one of his plays is that, “round the lonely great ones of this earth there is inevitably a conspiracy of envy and hatred, hatched by the base and common sort.” On December 30, 1941, the gates of Naini prison outside Allahabad opened for Azad; on August 9, 1942, the new gate of the old Ahmednagar Fort prison closed behind him.

Earlier, its mention would invariably bring to his mind several forgotten footprints of time and presented, page after page, six centuries of history. And yet, “in this world of thousand caprices and moods, so many doors are opened to be closed and so many are closed to be later thrown open.” Hence, between July 15 and August 5, 1942, he went around the country for consultation with the Congress leaders.

Azad spent a total of 10 years in jail. Thrown into a new world whose geography did not extend beyond a hundred yards and where the population was no more than 15 faces, he was overwhelmed by the morning sunlight and the evening darkness. Like Antonio Gramsci, Azad conceived of writing something that might absorb him and give a focus to his inner life. For this, he read a great deal. He drew the guidance and motivation from the reading of Scriptures. It is important to realise — and important particularly for the full knowledge and comprehension of times past — that internment kindled Azad’s Islam into warmth and fervour. Like Aurobindo Ghose who found God as a result of the wrath of the government, he felt comforted and serene. And like the future sage of Pondicherry, he found it impossible to explain the love of motherland or sacrifice to the thick-skinned Britons in India.

Independence came with Nehru’s ‘tryst with destiny’ speech, but Partition plunged Azad’s spirits into depression. “There is no more certain test of statesmanship,” wrote H.A.L. Fisher in his History of Europe, “than the capacity to resist the political intoxication of victory.” Though hurt and wounded by a colossal tragedy, the otherwise distraught Azad carried his tribulations with a stoical dignity and pursued his active role through stresses of inner disquiet. Ultimately, he suffered for the sake of truth. He had noted in one of his many elegant passages that, “the flowering trees whose offspring once represented beauty and grace were now lying in a heap in a corner, like burnt out bushes and trampled up grass.” The story which opened with the bright colours of the Al-Hilal and Al-Balagh closed in deep shadow.

Like the Urdu poet, Mir Taqi Mir, Azad could only voice affirmation of the historical process or protest against the iniquities of time and the suffering it caused to the sensitive mind and soul. He had indeed no small talk, and no time for it, or for little human foibles, but in his famous speech after independence at the Red Fort in Delhi, he lambasted those Muslims who threw themselves more and more deeply into the communal vortex. At the same time it must be said to his credit that, in the turmoil raging around the Muslim communities, Azad secured them the comfort of peace and security. Lesser men found conflict in the rich variety of life, but Azad was big enough not only to see the essential unity behind all that diversity but also to realise that only in this unity can there be hope for India as a whole and for those great and varied currents of national life.

Mushirul Hasan is a historian of modern India. He has edited a book Azad’s Legacies: Islam Pluralism and Nationhood (forthcoming))