Pashtun Peace Leader Khan Abdul Ghaffar Khan: The Islamic Gandhi Is Little Known But Today His Legacy Is More Relevant Than Ever 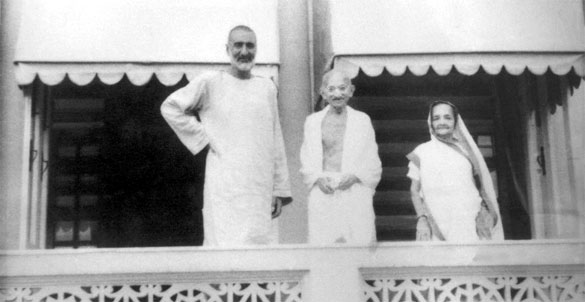 In September 2009, Hillary Clinton invited a group of Muslim guests to the US foreign ministry for breaking the fast together during Ramadan. In her address to the assembly she quoted a man practically unknown in the West. We should, as Clinton explained, "be inspired by our leaders to fight poverty, injustice and hatred with the weapons of the Prophet: patience and righteousness."

The quote in reference to Muhammad came from a Pashtun freedom fighter named Abdul Ghaffar Khan. Alongside Mahatma Gandhi, Khan was one of the most prominent personalities in the Indian struggle for independence. His unshakeable belief in the principle of non-violence while mobilizing the Pashtun tribes on the borders of the Indian subcontinent earned Khan the byname "Frontier Gandhi."

While Khan is a well-known historical figure in India and Pakistan – his face features in Gandhi exhibitions and still evokes Pashtun pride on both sides of the border – most people outside South Asia have never heard of this man who devoted his life to peacefully resisting the colonialists and uplifting his own people. 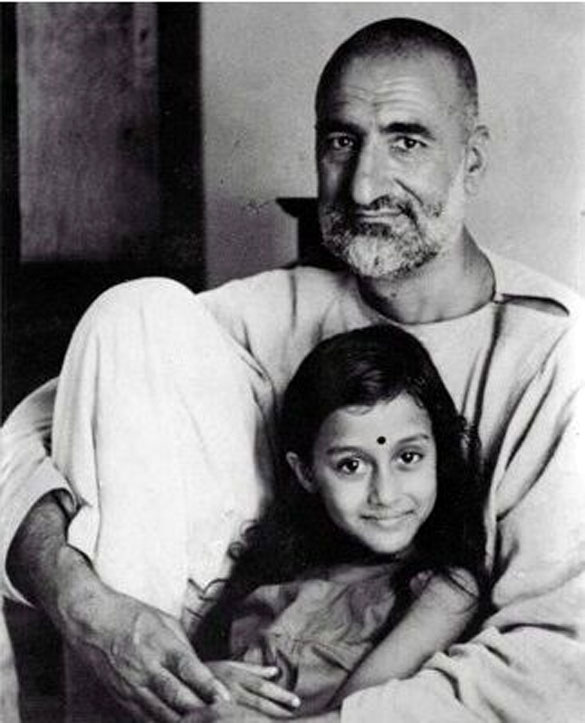 Ghaffar Khan with the young Indira Gandhi, probably in the 1930s. (Public Domain)

Khan was born into a wealthy family of landowners in a village close to Peshawar. This was the heartland of the Pashtuns, or "Pathans" - as they are known on the Indian subcontinent. Their restive territories were a source of constant trouble for the British Empire which sought to keep the Pathan homelands under tight control as a buffer zone against Russian intrusions.

The Pathans were a hardy mountain people infatuated with violence. Pathan tribal culture is firmly based on the principle of honor. Any kind of insult or act of violence towards one's tribe or family had to be avenged at any cost if one were to safeguard the clan honor. Dying in the attempt to take revenge was considered  better than living with a sense of insult or humiliation. There existed tribes that had hundreds of their members killed this way – a never-ending spiral of violence and retribution.

Ghaffar's father, however, was an exception: Although he was a mighty khan, a Pathan landowner, he believed in the power of forgiveness rather than revenge. He was convinced that staying out of blood feuds would make him a better Muslim.

Young Ghaffar went to an English mission school. He was impressed by the deep dedication with which his British missionary teachers transmitted education to Pathan youth. Early on in his life, Khan Abdul Ghaffar Khan committed himself to social transformation. At the age of 20, Khan founded his own school near Peshawar.

In the years that followed, Khan travelled around 500 Pathan villages to promote education. He was convinced that the Pathans had long been dispossessed of their freedom only because of their own violent tendencies and ignorant understanding of honor. Khan built more countryside schools and rallied for Pathan unity. Due to his tireless activism, he was soon known by the nickname "Badshah Khan" (king of the khans).

It wasn't until long that Khan spent his first sentence in a British prison, as the colonialists did not want the Pathans to be educated. During his many arrests in the years to come, Badshah Khan refused to bow to the oppressors and give up on his mission. He was often kept in solitary confinement under harsh conditions, but that didn't break is spirit. Like Gandhi he considered prison time as an opportunity to strengthen his connection with God. Upon one of his arrests he said:

"I am quite certain that it is all God’s doing. He kept me out of prison just for the time he wanted me outside. Now is his will that I must serve from inside. What pleases him, pleases me.”

When Khan heard of Gandhi's non-violent struggle for independence, he instinctively understood the transformative power of his ideas. In 1928, Khan met Mahatma Gandhi for the first time. Impressed by his vision, Khan joined the Indian National Congress, the leading movement in the Indian independence struggle.

The two men formed a deep bond that also served as a symbol for the subcontinent's religious pluralism. From a purely physical point of view, this was a surprising friendship: at more than six feet tall and weighing over a hundred kilos, Khan stood head and shoulders above the slight figure of Gandhi.

Khan didn’t just seek political counsel from Gandhi, but he also sought his spiritual proximity. As a Muslim, Khan mirrored Gandhi's deep faith and total surrender to God within his own religion, the Islamic faith.

"Of all the brilliant leaders around Gandhi, Badshah Khan was the one who most appealed to me because he not only understood Gandhi's teachings but also followed them completely. (...) Badshah Khan's words were simple: what drew him to Gandhi, he used to say, was Gandhi's ability to submit his will to God."

He goes on: "Mahatma Gandhi and Khan Abdul Ghaffar Khan held almost identitical views on many problems of the day; they reacted in the same way to similar situations, and they enjoyed each other immensely. The ideal of nonviolence was a great bond between them, but they also shared a love of nature, a child-like laugh, and an affinity with the poor. Both craved periods of silence and possessed a deep sense of spirituality." 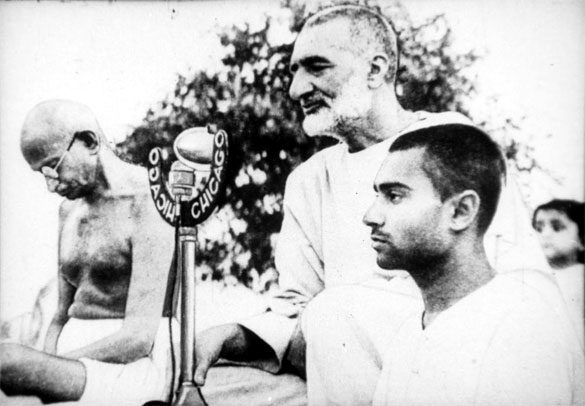 Mahatma Gandhi and Abdul Ghaffar Khan during a prayer meeting.

For Khan, Gandhi's life philosophy was the source of inspiration for the change he wanted to bring to Pathan society; a society that for centuries had been characterized by inner as well as outer conflicts. In fact, the greatest obstacle Khan faced was not in opposition from the British, but in the prevailing mindset of his own countrymen.

Eknath Easwaran describes Khan and his uncomfortable message to the Pathans as follows: "No one felt these contradictions [in Pashtun society] more strongly than Badshah Khan and no-one was more aware of the price Pashtuns were paying for their infatuation with violence. They had been dispossessed of their freedom, he held, only because of their own self-destructive tendencies."

Given the great challenges with which Khan was faced, his achievements are  impressive: In 1929, Khan founded the Khudayi Khidmatgar ("Servants of God") movement, which was joined by more than 100,000 Pathans. Dressed in a red shirt and armed with the "weapons" of the Prophet – patience and righteousness – Khan made the members of Khudayi Khidmatgar swear to remain completely non-violent in their struggle against the British.

The Pashtun movement thus grew to become the world’s first professional non-violent army. Before being admitted, any aspiring member of the Khudayi Khidmatgar had to swear an oath to serve humanity, forgive his oppressors and undertake two hours of social work every day.

The British tried to crush the Khudayi Khidmatgar with continued murder and torture. The Qissa Khwani Bazaar massacre in Peshawar on 23 April 1930, in which the British shot around 250 unarmed men from the Khudayi Khidmatgar, was the hardest test for Khan’s movement. Despite the colonial power’s extreme violence, Khan's men still refused to take up arms. The British were blindsided by the Pashtuns' non-violence.

Khan Abdul Ghaffar Khan later wrote: "The British feared a non-violent Pashtun more than a violent one. All the horrors the British perpetrated on the Pashtuns had only one purpose: to provoke them to violence."

When Khan was barred from entering the Frontier province in 1934, he decided to live with Gandhi in his Wardha ashram in Central India, together with his elder brother who had studied in England. Gandhi wrote about the two new ashram residents from the mountains:

“I was struck by their transparent sincerity, frankness and utmost simplicity. I observed too that they had come to believe in truth and non-violence not as a policy but as a creed. The younger brother [Ghaffar Khan], I found, was consumed with deep religious fervor. His was not a narrow creed. I found him to be a universalist. His politics, if he had any, were derived from his religion.”

In 1938, Gandhi spent a whole month with Khan visiting members of the Khudai Khidmatgar movement in the North-West Frontier Province. He was impressed by the strength and determination he observed in the movement. While many could not believe how the violent Pathans were capable of laying down their arms, Gandhi was not surprised. He held non-violence to be a universal and deeply human principle that did not depend on one's ethnicity.

Based on Islamic tenets such as universal brotherhood and service to God through serving his creatures, Khan not only brought profound transformation to the Pathans, but made a decisive contribution to the success of the Indian independence struggle.

This makes the second half of Khan’s life all the more tragic. After India's independence and the bloody partition of India and Pakistan in 1947, Khan continued his struggle for the Pashtun course. As the leader of a Pashtun opposition party, the "Pakistan Azad Party," Khan spent many years incarcerated in Pakistani prisons. Khan described the treatment he received in newly-created Pakistan as worse than what he had experienced in British prisons.

Just like Gandhi, Khan had been deeply convinced that dividing the Indian subcontinent was a grave mistake. In Muslim Pakistan he was now accused of being anti-Pakistan and pro-Hindu. It was an irony of history, given the fact that  Gandhi himself was shot by a fanatic Muslim who believed he was pro-Muslim.

During the years of the military government in the 1960s, Khan spent six years in  exile in the Afghan city of Jalalabad. In 1984 he was nominated for the Nobel Peace Prize. Four years later, Khan died while under house arrest in Peshawar, at the age of 97. In order to allow for a funeral to take place in his house in Jalalabad, the warring parties in the Soviet-Afghan War that was ranging in the region at that time arranged for a brief ceasefire. Tens of thousands of people crossed the Khyber Pass from Pakistan to pay their last respect to Khan.

Starting with the building of his first school in 1910, Khan had led a life of eighty years in service; reforming, transforming and resisting tyranny. It seems like Khan's words from 1985, three years before his death, have lost none of their importance:

"Today’s world is travelling in some strange direction. You see that the world is going toward destruction and violence. And the speciality of violence is to create hatred among people and fear. I am a believer in non-violence and I say that no peace or tranquillity will descend upon the people of the world until non-violence is practiced, because non-violence is love and it stirs courage in people."

Especially in an age when Islam is primarily associated with violence, it is important to remember Khan's example and tremendous sacrifice. He spent one third of his whole life in prison – more than Nelson Mandela – but never lost his faith in God and his mission.

As Easwaran concludes about Khan: "Were his example better known, the world might come to recognize that the highest religious values of Islam are deeply compatible with a non-violence that has the power to resolve conflicts even against heavy odds."