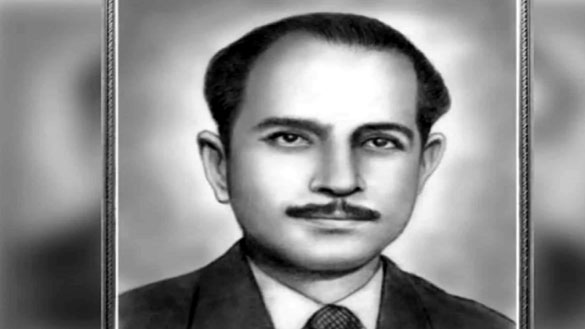 Do you know who coined the slogan ‘Jai Hind?’ This ubiquitous slogan was given by Abid Hassan Safrani, a close associate of Netaji Subhash Chandra Bose who is being honoured posthumously by the Kolkatta-based Netaji Research Bureau.

Safrani was as enigmatic a person as Bose. In his five-year association with Netaji, he served as his personal assistant when the latter was the Commander-in-chief of the Indian National Army. He was a Major is the INA.

Author Narendra Luthur has disclosed how this slogan was coined. It seems once Bose asked Safrani to give him a salutation for addressing the public from the platform of the INA. He first replied with usual Hello. Bose dismissed it and thereafter Safrani came up with ‘Jai Hind.’

This fact is corroborated by Choudhary Acharya in his book on freedom fighters. He said Safrani used ‘Jai Hind’ for the first time in 1941 during the first meeting of the free Indian centre in Berlin. Bose instantly liked it started using it. He would start and end all his speeches with 'Jai Hind.'

The slogan became so popular that all the frontline leaders of the Indian freedom struggle including Mahatma Gandhi, Jawaharlal Nehru etc incorporated it in their speeches.

In no time, 'Jai Hind' became a symbol of Indianness and decided later too continues to pump adrenal in the veins of all Indians. It’s also the official salutation for all the armed forces.

Historian Sayeed Naseer Ahmed writes in his book ‘The immortal’ Safrani was the first to call Bose as Netaji. Soon everyone started addressing him as Netaji, a sobriquet has stuck with him even after his death.

Saifrani traveled with Netaji during his journeys through Germany. Bose’s nephew Sisir Kumar Bose has given a detailed account of their association in his book “INA in IndiaToday.”

Abid Hassan was born into a family of freedom fighters in Hyderabad in 1912. After getting a degree in engineering, he left for Germany for higher studies and ended up joining the INA. He was handpicked by Bose for organisational responsibilities in view of his leadership skills. He held the rank of Major and was in charge of the Gandhi regiment of the INA

Safrani was a polyglot; had good command over English, German, French, Arabic, Telgu and Punjabi.

After the INA’s surrender to the British Indian Army in April 1945 in Imphal, Safrani was imprisoned in a dark and dingy cell. In a latter to his mother Amir Begum “Ammi Jaan,’ Safrani had described the hellish conditions of the cell.  He was awarded a six-year prison term and also put on trial for treason in the famous Red Fort  army trials. Fearing that her son may get death sentence, a worried Begum Amir approached senior Congress leaders. Later, on the intervention of J L Nehru and Governor General Lord Mountbatten, he was released.

A Family Of Patriots

His father Zaffar Hassan was the dean of Osmania University; mother Begum Amir was a Gandhian. They raised Abid and his brother Badrul Hassan as staunch patriots and nationalists. The family was close to Mahatma Gandhi. Badrul Hassan, in his book, writes that whenever the Hassan family would come to meet Gandhiji at Sabarmati Ashram, his Personal assistant Pyare Lal came to receive them at the railway station. Badrul Hassan has edited Gandhi Ji’s book ‘Young India”.

Begum Amir Hassan followed Gandhi till her death (1870-1970). Always wearing khadi, Amir lived frugally and remained confined to a small room, just the way Gandhiji lived in Sabarmati Ashram. He gave away her inherited property to the cause of freedom movement. She was also a close friend of Sarojini Naidu.

Most of the Congress leaders fondly addressed her ‘Ammijan.’

Abid Manzil, the family’s ancestral house still stands tall in Hyderabad. It’s also the place from where the of burning the English goods started on the appeal of Gandhiji in 1920.

Sisir Bose has given details of his uncle’s travels across Germany, on a submarine and in the jungles of Imphal during the second world war.

Once Nehru visited a jail in Singapore where the INA prisoners were kept. During his interaction with the Indians he spotted a man sitting in the corner and asked who he was. In response, the man barely said ‘Jai Hind.’ As Nehru asked wether he was from Hyderabad, he just said ‘yes.’

After his release from prison, Safrani’s health continued to deteriorate and personalities like Batak Chandra, Elizabeth, C S Vasu attended to him at his Banjara Hills home.

As a Civil Servant

After he had recovered, he unsuccessfully dabbled into business. Thereafter, he sat for the Civil Services and cleared it in the first attempt. It’s said that he was interviewed by Prime Minister Nehru and inducted into foreign service.

As a diplomat he served in Egypt, Iraq, Turkey, Senegal Gambia, Ivory Coast etc. He also had to face criticism when he was found absent from Baghdad at a time when the Jordanian Kind Shah Hashma-e-faizal was murdered in a military coup.

Safrani was a gardening enthusiast. After retiring, he set up a horticulture farm in Golkunda. Quite often he would carry the farm produce to Kolkatta for the family of Netaji. It was his way of commemorating the memory of Netaji.

Safrani passed away in 1984. His niece Suraiya Hassan has opened a School in her uncle’s name in Golcunda.

There is an interesting story about his assumed surname, Safrani. When the INA was to select the colour of its flag, a dispute arose; the Hindus preferred saffron and the Muslims chose green. Later, the Hindus withdrew their proposal and yet the Muslims continued to insist on green. It’s said that the adamant attitude of Muslims hurt Safrani. At this stage he assumed Safrani (after Saffron) as a gesture towards the open mindedness of the Hindus. His real name, however, was Zainul Abdeen.