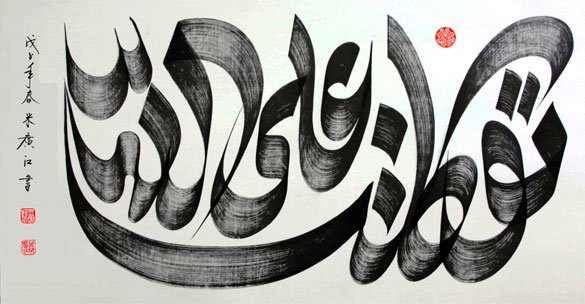 Often forgotten – both consciously and unconsciously – Islam has been thriving in China for almost as long as the religion itself, and the works of Liu Zhi are but one example of how fascinating and beautifully mystical Islam really is through the lens of East Asian philosophy.

China, although today dominated by its horrendous treatment of Uyghur Muslim minorities in the Northwestern province of East Turkestan, or Xinjiang in Mandarian Chinese, does in fact have a long and deeply connected history with the religion of Islam. With the Tang Emperor Gaozong officially allowing Muslims to practice freely in the city of Xian in 651 AD, Islam has now been present in the country for more than 1,300 years.

Hui Muslims are a result of this long relationship of Islam in China – an official ethnic minority in China, Hui Muslims today are mainly living in the western region of China and in the provinces of Xinjiang, Ningxia, Gansu, Qinghai, Henan, Hebei, Shandong, and Yunnan. Speaking Mandarin Chinese as a first language, Hui Muslims came from ancestors of merchants, craftsmen, scholars, and even soldiers from Islamic Persia and Central Asia from the 7th to the 13th centuries.

It was during the Ming Dynasty from 1368 to 1644 that saw native rule return to China after almost a century of Mongol rule – and at the beginning of the Ming Dynasty, many of its early rulers feared Muslims within China, claiming that they were too foreign and were in fact collaborators with the Mongols, who they had exiled out of the empire. To stem these fears of Muslims within China being foreign collaborators, Ming rulers began a policy of assimilation, in which many Hui Muslims were encouraged (and forced) to quickly adopt the national Chinese language and culture.

This form of nationalism extended to even cutting off Muslims within China from contact with the outside Islamic world in neighbouring Central Asia and Persia – this then, in turn, led to many Chinese Hui Muslims scholars and academics to look towards their Confucian education to help better spread the word and understanding of Islam.

This captivating melting of Confucian and Islamic thought happened in large part because of the many Hui Muslims who sought to gain an appreciation for Islam within China – eventually, the Han Kitab would be produced, a sort of Chinese-Islamic canon that brought together the teachings of Confucianism and Islam.

The Han Kitab became a collection of works by Chinese Muslims and an incredible look into how Islam can be better understood by looking at it through the lens of Confucianism. One of its most celebrated scholars and contributors to the Han Kitab was Liu Zhi, who would later become known as one of China’s most renowned Muslim thinkers.

Born in 1660, Liu Zhi came from a Muslim family of Hanafi and Sufi background – during that time, many Hui Muslims in the 1600s were heavily influenced by Sufism, especially the Qadari, Naqshbandi, and Kubrawi branches of Sufi Islam. First obtaining religious schooling from his father Liu Sanjie, Liu then at the age of 12 studied scriptures with academic Yuan Ruqi at the Garden of Military Studies Mosques in the city of Nanjing. From the age of 15 onwards, Liu Zhi then studies from home – and for the next decade and a half, becomes immersed in the learnings of Confucianism, Buddhism, Daoism, and Islam.

Using the Confusion concept of a sage to better understand prophethood within Islam, Liu is reported to have considered Confucius and Mencius as the “Sages of the East” while the Prophet Muhammad was the “Sage of the West” – stating that “the teachings of the Sages of the East and West, today as in ancient times, are one”.

From around the age of 30, Liu is reported to have then studied Islamic scriptures and spirituality at a deeper level for the next 20 years while still in Nanjing. During this time he also became fluent in Arabic and wrote several of his notable works and books up until the 1720s. His writings became a part of the Han Kitab, a result of a larger movement that sought to understand Islam on a deeper level through Confucian thought.

His most celebrated written works, which cemented Liu as one of the leading authoritative voices on Islamic beliefs in Confucianist China, were Tianfang Xingli (The Principles of Islam, published in 1704), Tianfang Dianli (The Rules and Proprieties of Islam, 1710), and the Tianfang Zhisheng Shilu (The Record of the Prophet of Islam, 1724).

Liu was convinced that Islam could – and should – be better understood in its universality by delving deeper into Confucian thought, and wrote:

Today recognized as one of the greatest Chinese scholars on Islam, Liu Zhi was revolutionary in terms of rethinking Islam within both East Asian and Confucian lenses – he eloquently brought together the beauty of the Islamic religion with the profound thinking of Confucian thought, and popularized Sino-Islamic intellectualism.

While little is known of his personal life, Liu died in 1739 during the Qing Dynasty – the last dynasty before the Xinhai Revolution of 1911 that ended 5,000 years of monarchy and ushered in the Republic of China. After his death, Liu was given the title of a “wali”, with many Hui Muslims referring to him as a Sufi saint. He is still buried today outside of the southern gate of Nanjiang – a site of deep historical and religious importance to Muslims across China.

While China today is dominated by the Communist Party, it cannot be denied that the country’s long, sometimes turbulent, but oftentimes beautifully synchronized relationship with Islam has played a large role in the country’s development as one of the world’s most powerful nations on earth. Often forgotten – both consciously and unconsciously – Islam has been thriving in China for almost as long as the religion itself, and the works of Liu Zhi are but one example of how fascinating and beautifully mystical Islam really is through the lens of East Asian philosophy.

History of Islam in China