1.    Teachings of Hazrat Makhdoom illuminate human life and awaken hearts and minds to the light of Truth and guidance.

2.    Sheikh Makhdoom Abdicated the Throne To Attain the Path of Marifa leading to God Almighty.

3.    Until his death he kept reforming the people and established the Ashrafi Sufi Order, which has a large following in India.

4.    In some of his letters Hazrat Makhdoom addressed to sultans and ulama and emphasised the significance of consultation as a necessary component of successful governance.

5.    He urged them to promote social values and welfare of the civilians.

The annals of Islamic history are littered with references to countless events and persons that have bolstered the caravan of spiritual teachings. Such unique characters are honoured in Islamic history for their efforts in bringing about a momentous change in the dark world of hearts. Their activities and actions, which are chronicled in history, illuminate human life and awaken hearts and minds to the light of Truth and guidance. Hazrat Makhdoom Ashraf Jahangir Semnani is one of these spiritual figures (may Allah have mercy on him). 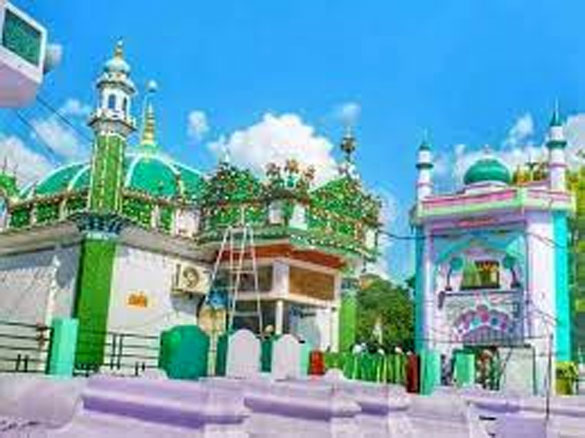 In Semnan, the historic capital of Iran, Hazrat Makhdoom Ashraf (1285–1386) was born. His father, Hazrat Sultan Ibrahim, was a spiritual dignitary as well as a just and compassionate ruler of Semnan. His forefathers are said to be Hazrat Imam Hussain's descendants, who descended from the Holy Prophet. He possessed incredible brilliance, resourcefulness, and knowledge. At the age of four and a half, he began his religious education and memorised the entire Quran in seven recitations by the age of seven, and excelled in the study of tafsir (Quranic interpretation), hadith, fiqah (Islamic jurisprudence), and other subjects. He had mastered various disciplines, including religion and philosophy, by the age of 14, and had grown into a highly educated and adept scholar. Hazrat Makhdoom Ashraf had amazed even the best intellectuals and theologians from as far as Baghdad with his astounding talent, which was noted in the famous Persian book Lataif-e-Ashrafi in the form of a couplet:

When his father died, Hazrat Makhdoom Ashraf was only 15 years old, and he was inevitably crowned as his successor. In a ceremony held around 733 AH, he was proclaimed the sixth Sultan of Semnan. For twelve years, he ruled over Semnan with absolute sincerity and impartiality, and the people regarded him as a just and sincere king. During his reign, he became a salik (a spiritual path traveller) and a marifa seeker (inner knowledge gained through mystical means). He was fascinated to mysticism and was frequently seen in the company of holy persons, mystics and Sufis, the most famous of them being Ruknuddin Ala ul Daula Semnani.

In a dream one night, Hazrat Khizr (peace be upon him) honoured him by appearing to him. He explained to Hazrat Makhdoom Ashraf the wazifa including Allah's names, which had to be performed without moving the tongue. He did this wazifa for two years until the great saint Hazrat Uwais Qarni arrived in his dream and offered him Uwaisi wazifas, which greatly assisted his spiritual development. For over three years, he was so engaged in the blessings and spiritual advancement he had gained from Hazrat Uwais Qarni’s teachings that he lost all desire to stay as Sultan of Semnan.

With time, his longing for marifa got deeper, and at the age of 25, Hazrat Khizr (peace be upon him) reappeared in his dream on the 27th of Ramadan. He was asked to abdicate the kingdom and travel to India, where he would find his Pir (spiritual mentor), Hazrat Sheikh Ala ul-Haq Pandwi, a prominent Chishtiya saint and a disciple of Hazrat Sheikh Akhi Sirajuddin.

He told his mother about his dream when he awoke, and she gave him permission to carry out his divinely ordained task. When his mother found out, she stated that previous to his birth, Khwaja Ahmad Yasavi had foreseen the birth of a great saint who would illuminate, inspire, and guide those who were engulfed in darkness. With her approval, he made arrangements to travel to India, naming his younger brother Mohammad as his successor.

Despite having a lavish lifestyle, a wealth of luxuries, glory, and dignity, he preferred the spiritual path leading to Marifat of God Almighty. The real believer’s selflessness is such that thrones, wealth, glory, power, and materiality have no effect on him. Hazrat Makhdoom had it all, from wealth to luxury, but because he was cognizant of the truth, he was not impressed, and instead, he continued to pursue spiritual grandeur with zeal.

Thousands of troops greeted Hazrat Makhdoom Ashraf as he left his homeland. Hazrat Mir Sayyid Ali Hamadani became his associate around this time. They went to all of the major Sufi shrines in Iran, Iraq, Syria and Turkey. After a long journey of visiting the shrines, Hazrat Makhdoom Ashraf arrived in Maner, Bihar, where a famous saint named Hazrat Makhdoom Sharfuddin Ahmed Yahya Maneri had died the day before and was awaiting funeral prayer. Prior to his death, Sheikh Maneri requested that his Janazah (funeral) prayer be performed by someone who has relinquished his throne, is a Hassani and Hussaini (a descendant of both Imam Hassan and Imam Hussain, the Prophet's grandsons, may Allah be pleased with them) and a Hafiz who knows each of the seven types of Qirat.  Hazrat Makhdoom Ashraf was already aware of this through Kashf (revelation). The disciples of Hazrat Makhdoom Sharfuddin eagerly awaited his arrival, and despite the fact that Hazrat Makhdoom Ashraf refused to offer the burial prayer out of humility, he carried out Sheikh Maneri’s wishes. Hazrat Makhdoom Ashraf set out from Maner for Pandua Sharif, where Hazrat Alaul Haq Pandwi, who would later become his spiritual master, awaited his arrival with bated breath. In Pandwa Sharif, India, he reached the summit of spirituality and attained spiritual khilafat from his spiritual mentor Hazrat Alaul Haq Pandwi.

Until his death on the 28th of Muharram, 808, Hazrat Makhdoom Ashraf continued to spiritually reform the people and had established the Ashrafi Sufi Order, which has a large following in India. Every year, between the 26th and 29th of Muharram, His Urs (death anniversary) is commemorated. His shrine in Kichhauchha Sharif is known for being particularly helpfl in assisting persons who have been afflicted by Jinn, and his name is still invoked in this regard.

His Works and Teachings

Basharatu'l-Ikhwan, Fawa'idu'l-Ashraf, Basharatu'z-Zakirin, and Tanbihu'l-Ikhwan are among his famous writings that teach people the necessity of grasping the meanings and essence of technical words of Sufism. His Miratu'l-Haqai'q and Kanzud-Daqai'q were written for individuals who were more accomplished in Sufism. These writings, as well as his Maktubat-i Ashrafi letters, contribute to a better understanding of Wahdat al-Wujud.

Some of Hazrat Makhdoom Ashraf's letters were addressed to sultans and ulama. He emphasised the significance of consultation with various leaders as a necessary component of successful governance. He urged them to promote social values and the welfare of the civilians. Although he placed a strong focus on enforcement of the Sharia, the fundamental idea was to ensure that common people were treated fairly.