Mirza Asadullah Khan Ghalib's Poetry Is Nothing Short Of Being Divine 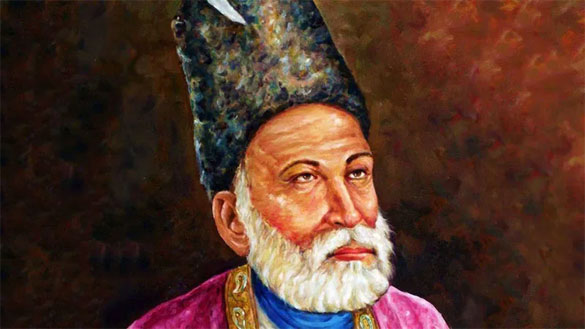 After two hundred and twenty two years, Ghalib is still regarded as the loftiest poet Urdu has ever produced. He is one of the major world poets across all languages, one of the most chronicled poet and a genius of his age. His poetry is relevant among people of all age groups. His poetry still haunts millions of restless minds with desire and despise. It gives solace to people with deep wounds. His poetry is nothing short of being divine. As he himself says:

“Comes mysteriously such thoughts in my mind that…

Ghalib , scratching sound made by pen is the voice of an angel”

Classic Urdu literary critic, Abdur Rehman Bijnouri in his book “Mahasin-i-Ghalib” writes that “There are only two divinely revealed books in India – the holy Vedas and the Dewaan-e-Ghalib.” Syed Maududi says that this was our fortune that an incomparable literary personality like Ghalib was born among us but it was his misfortune that he was born at a time when the nation was in a state of crisis and because of which he is yet to get the place which world literature has given to lower grade of poets just because they were born in progressive nations.

Ghalib is the most quoted Urdu poet. Even after such a long time we see his poetry everyday on social media, in political rallies, in seminars or sung by legendary singers like Jagjit Singh, Nayyara Noor or Ghulam Ali. Even after this long time a lot of plays or films were and are still made on Ghalib like Mirza Ghalib Bunder Road Pe (Ghalib on Bunder Road) by Khwaja Moinuddin, Ghalib Kaun Hai (Who is Ghalib) by SM Mehdi, Mirza Ghalib by Sohrab Modi and the series on Ghalib by Gulzar. He is the oft-quoted poet in historical speeches or judgements also. When Satya Nadella , the CEO of Microsoft visited India in May, 2016 for the program,“Tech for Good Ideas for India”, he said “ I have only two passions that have driven my dream “Poetry and Computer Science” then quoted Ghalib,

(Thousands of desires and each one dying for, many of my desires were filled, by yet they appear).

Justice Katju, after passing the landmark judgement for the euthanasia case in March 2001 quoted Ghalib,

(I die in my desire for death, but death while present eludes me).

There are countless examples like these that prove how Ghalib is still relevant and alive after centuries.

Born on 27 December 1792, Ghalib’s real name was Mirza Asadullah Beg, home-schooled first by Molvi Mohammad Muazzam, then for some months at a madrassa and later by a Persian scholar, Molvi Abdus Samad. Before turning nine, tragedy befell him when his father and uncle died. He first started writing under the Takhallus, “Asad”, which means “lion” and then, “Ghalib”, which means “dominant”. At the age of thirteen he married Umrao Begum who bore him seven children, out of which none survived and he later adopted his wife’s nephew Arif who also died at the age of thirty six. He had no formal employment, he used to run his life on grants, loans and then on his in-laws’ support, who were very rich. Despite having no regular income Ghalib was fond of the finer things in life like expensive liquor, kebabs and mangoes. Ghalib feared more the deprivation of these things than he feared death.

Ghalib was arrested many times. He was first arrested after the revolt of 1857 when many Muslims were arrested. When he was arrested and produced before Col. Brun he was asked, “Are you a Muslim?” to which he replied, “I am a half Muslim because I drink but don’t eat pork”. He was a man of humour. Ghalib was earlier arrested in 1841 from his home for gambling. He was imprisoned for six months and fined 200 rupees. He was released after half of his sentence on the advice of British clinical surgeon Dr. Ross at the request and help of Physician and Poet of Kashmiri ancestry Hakeem Momin Khan Momin, who also paid money for his bail.

Ghalib’s awareness is based on his own experiences, deep sufferings, and his intense struggle. His poetry is emblematic of man’s fate, paradoxes and defects and events that cause deep anguish. His Philosophy has dialectic touch and human sensibilities which is presented in the lines like these,

(For every little thing to be easy

It is difficult for a man to be a man.)

Ghalib was a self-proclaimed Sufi-he believed in spiritual gnosis and not in rituals which he clearly shows when he writes,

(These Sufi like discussions, and your speech Ghalib. We would have considered you a saint, had you not been a drinker).

Saif Mahmood in his book “Beloved Delhi, A Mughal City and her greatest poets” writes that, “Ghalib is a profound Philosopher who transcends time, culture and geographies. He is a spiritualist who first celebrates God’s manifest presence and then immediately pitches it against the need for His unmindful all pervading form. He mourns loss but only to tell us that pain is much a part of full life as pleasure. He is a powerful visionary but also aware of the inevitability of being hopelessly caught up in the exigencies of everyday existence. Like all geniuses Ghalib is a mystery.”

Altaf Hussain Hali, who spent much time with Ghalib has in his book “Yaadgar I Ghalib” highlighted two main aspects of his poetry which are Turfaagi-e-Khayaal (ingenuity of thoughts) and Jiddat-o-nudrat-e-mazaamin (innovative freshness of subjects). Hali has also written about a particular incident in his book that someone from Banares insisted Ghalib that the couplet written by Mir Amani Asad, the disciple of Sauda, is written by him. On listening to the  couplet Ghalib became upset and said “If it belongs to another Asad, let God bless him and if me let God’s curse be on me”. About seven years before his death epidemic hit Delhi which killed around two thirds of people on which Ghalib commented; “I should have died that year but it is below my dignity”, which proves his inventive intellectual disposition and the extraordinary element in his sub consciousness

Ghalib, despite having financial issues was a man of self-respect and had human sensibilities. Delhi College was in need of a Persian professor. British secretary Mr. Thompson offered this job to Momin who declined and recommended the name of Ghalib for his financial issues.  Mr. Thompson didn’t come to receive Ghalib for protocol reasons and sent another person. It hurt his sentiments and he left without even entering the college.

Ghalib was not only a great poet but an extraordinary letter writer also. His letters were first published in 1868, four months before his death by Matba-e-Mujtabaat and then in 1869 by Urdu Mu’alla and in 1949 by Od-e Hindi. Many Urdu literary giants like Hasrat Mohani, Niyaz Fatehpuri, Ale Ahmad Suroor have written on Ghalibiyat. Even, when the Poet-Philosopher Allama Iqbal left for Europe for his higher education he visited the grave of Ghalib to pay his respects before starting his academic journey.

Literary critic Abdul Ghani beautifully sums him up, “Ghalib talks about mystical matters and he addresses God in such a way that by not providing for him, the Almighty took a blame for himself. It is clear that mysticism and materialism have nothing in common. Bedil’s high thinking impressed emperors and elites, but Mirza was a free soul and a non-conformist to the core. This is a great quality of Ghalib and a secret of his popularity, somewhat complex, multifaceted and attractive for everybody. This is why people of different denominations, from the learned to the commoner, from the faithful to the sinful, and from the ascetic to the free thinker, appreciate his down to earth nature and elucidation of beauty”.