Research Studies On The Life, Poetry And Thought Of Allama Muhammad Iqbal by IAP, IRD, And ICCMS

Muhammad Iqbal (9th November 1877—21st April 1938) is acknowledged as a great poet, philosopher and political thinker/visionary. Considered as a great intellectual figure, as well as critical thinker, Iqbal is widely commemorated in Pakistan. He is regarded as the “ideological founder” of the state and his birthday is annually commemorated in Pakistan as ‘Iqbal Day’. On Iqbal’s name exist many public institutions in the Sub-Continent: in Pakistan, prominent among them are Allama Iqbal Campus of Punjab University (Lahore); Allama Iqbal Medical College (Lahore); Allama Iqbal Open University (Islamabad), etc. In India, ‘Allama Iqbal Hall’ and ‘Allama Iqbal Hostel’ at Aligarh Muslim University and Jamia Millia Islamia, respectively, and ‘Iqbal Institute of Culture and Philosophy’ and ‘Allama Iqbal Library’, University of Kashmir (J&K) are also established on his name. 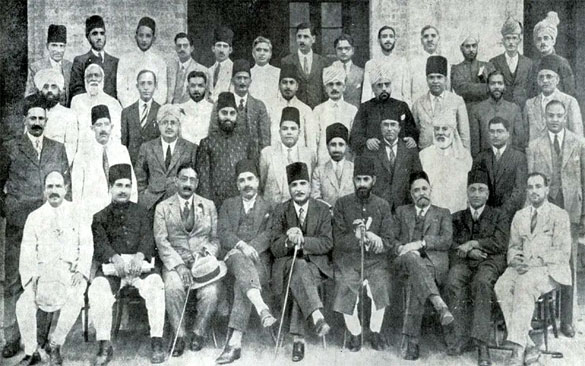 Allama Iqbal (centre, bottom row) with members of the Circle of Islamic Studies in Lahore, 1933

Besides these, there are some academies and research centres which have been established on his name or dedicated and devoted to the research studies on the life, poetry and thought of Iqbal as well as on the areas in which he made a tremendous contribution (as a thinker and as visionary) especially critical thinking. Today (9th Nov), on the occasion of Allama Iqbal’s birth anniversary, I here present an introduction of three such ‘Academies/ Centers’, based in Pakistan and UK, viz., Iqbal Academy Pakistan (IAP; Lahore); Iqbal International Institute for Research & Dialogue (IRD), International Islamic University, Islamabad (IIUI); and Iqbal Centre for Critical Muslim Studies (ICCMS), University of Leeds (UK).

IAP’s Library is “one of the oldest and the richest libraries in the world that has specialized in Iqbal Studies” and has a vast collection of books on Iqbal studies and allied subjects, which “not only provides academic logistics support to the research projects of the Academy but also extends research and reference facilities to a large number of students, teachers and Iqbal scholars every year” (for more details, see www.iap.gov.pk).

Among others, IAP publishes “Iqbal Review” which is “devoted to research studies on the life, poetry and thought of Iqbal and on those branches of learning in which he was interested: Islamic Studies, Philosophy, History, Sociology, Comparative Religion, Literature, Art and Archaeology”.

Iqbal International Institute for Research & Dialogue (IRD), International Islamic University Islamabad (IIUI): IRD was originally established at Lahore as a global centre of excellence in Islamic Studies to encourage critical interdisciplinary approaches to the study of contemporary Islamic thought. With particular emphasis on areas such as human rights, rule of law, pluralism, diversity, democracy, Islam and the West, IRD aims to build an inter-faith dialogue and construct intra-religious relations, and to inject multiple Islamic responses to religious extremism and violence. In January 2008, IRD became an autonomous affiliate of the IIUI.

Drawing inspiration from the fundamental values and teaching of Islam as articulated by the writings of Allama Iqbal, IRD takes steps towards “evolving a culture of peace, tolerance, and harmony in Pakistan and among the Muslim Ummah”, promotes and develops “dialogical rationalism” and creates “an awareness of humanity’s common aspiration and endeavour to build a morally-informed, just social order”.

The main aims and objectives of IRD are: to provide an open forum for critical creative work, candid discussions and lively debates on issues of contemporary relevance to Islamic societies; to bring together researchers and scholars of the highest caliber from all over the world in the field of contemporary Islamic thought to give public lectures, conduct seminars, teach courses and interact with the students and faculty of the Pakistani universities and other educational and civil society institutions; to transmit the dynamic and forward-looking message of Allama Iqbal to community leaders, trainers and civil society leaders; to create an intellectually challenging environment which can promote new thinking and to develop a vision leading to personal and social transformation; to collaborate with like-minded persons and institutions in Pakistan and the world at large for promoting a better understanding of Islam and creating an awareness of humanity’s common endeavour to create a moral and just social order; to organize international consultations of Muslim scholars and to discuss and deliberate on the issues which are of critical importance to Pakistan in particular and to Muslim Ummah as a whole; and to promote, organize, sponsor and arrange excursions and tours within the Muslim world for the cultural and intellectual development.

Over the years, IRD has emerged “as the busiest intellectual forum in Pakistan” and has won “a respectable place as a global centre of excellence and an open forum for critical, creative work, candid, timely and productive conversations on issues of contemporary relevance to Islamic societies”.

Furthermore, IRD has established collaborative relationships with academic institutions, think tanks, and civil society groups; it has launched a series of publications in order to reach a wider public; it offers four fellowships throughout the year: two senior scholars as Iqbal Fellows and two doctoral students as Research Fellows, who undertake research projects on themes and issues related to IRD objectives and programs (the present author has the honor to be the first, and so far the only from J&K, to have served ‘Iqbal Fellow’ in 2014); etc. Prof. Mumtaz Ahmad, Professor of Political Science, Hampton University, USA (d. 2016) served its Executive Director till his death and was succeeded by Dr Husnul Amin. For more details about IRD, visit https://www.iiu.edu.pk/?page_id=3718.

ICCMS has three (3) Directors: Dr Mustapha Sheikh, Dr Tajul Islam (both are serving as Lecturers in Islamic Studies at Leeds) and Professor Salman Sayyid (Professor of Social Theory and Decolonial Thought, Leeds). For more details about this Centre, visit  www.iqbalcentre.leeds.ac.uk/.

In sum, an introduction of the aims, objectives and activities of these three Research Centres/ Academies—dedicated and devoted either to the research studies on the life, poetry and thought of Iqbal (such as IAP) or on the areas in which he made a tremendous contribution, as a thinker and as visionary, especially critical thinking (such as IRD and ICCMS)—shows impact, significance and relevance of Allama Iqbal’s contribution and thought.