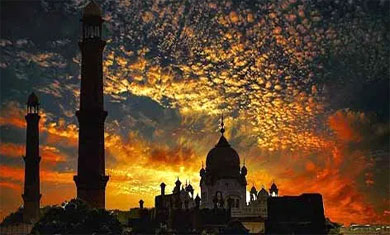 If the best proof of God is to be seen in the lives of saints, the most compelling evidence of God in Islamic history is in the lives of Imams. Shrouded in obscurity or buried deep in mythological or symbolic structures and often framed in sectarian terms is the luminous life of an Imam that is unearthed, to an extent, by painstaking  efforts of likes of Prof. Qasim Khusro and presented in a compelling philosophical language by likes of Reza Shah Kazmi.

There are some utterly dedicated spirits whose job is to keep different streams of knowledge and higher pursuits alive. Intizar Hussain has remarked about monumental contributions of SRS Faruqi that only a djinn could do the work he has done. The same   remark may be transposed to Prof. Khusro Qasim who has been assigned to clarify certain aspects of lives and works of Imams, the supermen of Islamic history. It is thanks to Qasim that we have now better researched and edited number of classical texts and clarifications of many a tradition and doubts often expressed regarding this or that notion about lives and works of Imams. In order to better appreciate the sacred heritage bequeathed to us in numerous volumes, let us try to note some snippets from the life of the first Imam – the first spiritual ‘pole’ (quṭb) of Sufism after the Prophet himself who is “situated at the summit of all the spiritual chains (salāsil, sing. Silsila) by which the Sufi orders link their masters to the Prophet.” – as presented in a modern classic (Justice and Remembrance:  Introducing the Spirituality of Imam Ali) by Reza Shah Kazmi and this would help put in perspective more technical scholarly contributions of Qasim and others. Enormous importance of lives and works of Imams for the modern world and Shia-Sunni understanding calls for attention to scholars like Qasim and Kazmi from both scholars and laity.

Sabziwārī  has cited the saying of Imam ʿAlī, ‘We are the most beautiful Names’, in his commentary on the divine Names: ‘There is no doubt that they [the Imams] are His most exalted indicators and His greatest signs (ʿalāʾimihi’l-ʿuẓmā wa āyātihi’l-kubrā), as the Prophet said, God bless him and his family, “Whoso sees me has seen the Truth (al-Ḥaqq).”’  Kazmi notes equation of the spiritual station or inner reality of the Imams with those of the divine Names and attributes. “The Prophet, the Imam, the saint, the ‘perfect man’ manifest those aspects of the divine nature that can be perceived on the human plane.” Lest someone construe this as contradicting tawhid, Kazmi  notes the expression ‘I am the gnosis of the mysteries’ and clarifies: “If this be understood, all the other statements fall into place naturally. For here, the Imam is identifying himself not with God, but with the knowledge of God—not with his own knowledge of God, for this would still be a relative knowledge, belonging to or attributed to himself as a relative being. It is only the knowledge itself—the knowledge that God has of Himself, and not the knowledge that man has of God—that can be fully identified with the object known.” Deobandi –Barelvi controversy on the notion of ilm al-gayyib/omniscience of the Prophet (SAW) may be resolved by noting this distinction.

Shias and Sunnis are united on the summit of spiritual understanding of the centrality of Ali (RA) and of the key role in interpreting the scripture by Imam/sage. Shiism, if appreciated as embodying one essential and universal/ esoteric dimension of Islam, or corresponding to Sufi  Islam’s esoteric-metaphysical content, is not  exclusivist sectarianism but of universal spirituality. Imam Ja‘far al-Ṣādiq (d.148/765) described his followers in terms of dhikr: “Our Shī‘a are those who, when alone (idhākhalaū) , invoke/remember God much” a definition that Muslims in general and Sufis in particular would seek to live or witness to. Let us meditate, with Reza Shah Kazmi, on certain sayings of Imam Ali (typed in bold here), to see how they embody quintessence of Islamic hikmah centric approach that attracts due to its very nature the best of minds and noblest souls.

•             Imam Ali said ‘Praise be to God who is well-known (maʿrūf) without being seen.’  “The paradox in this statement is sharpened by the following formulation of the same principle: ‘By things their Creator manifests Himself to the intellects; and by things He is guarded from the sight of the eyes.’ The veils cannot help revealing what they are supposed to veil; they are not just transparent to the reality they cannot hide, but in and of themselves, they reveal rather than conceal that reality. This reminds us of the famous saying of the Imam..: ‘Were the veil to be removed, I would not increase in certitude.’ The veils of creation ultimately reveal what they initially conceal, but this revelation is perceived only by the eye of the heart that has been purified by the dhikr, and which now ‘sees after being blind.’ God, as al-Ẓāhir, projects something of His ‘hidden treasure’ within, and as, the creation. The world manifests the ‘apparent’ aspect of God—that which ‘appears’ from Him, that which can be manifested by Him or created by Him—even while concealing the mystery of God—that which remains ‘hidden’, al-Bāṭin, the supra-manifest source of being, the uncreated essence.”  One needs to read dense pages of the history of philosophy (on Being and alethia) from pre-Socratics to Heidegger to appreciate both profundity and precision of the Imam’s formulation.

•             The true Faqīh is defined by the Imam as ‘he who does not make people despair of the mercy of God, and does not make them lose hope in the gracious spirit of God .’ It is in this sense that Ibn Arabi who thought his mission was to declare vastness of mercy of God may be read as true faqih. Jurists who end up sending people to hell for their imagined or real transgressions of this or that manual and who fail to link their formulations or opinions to overarching mercy here and hereafter are not to be trusted.

•             ‘The prophet of a man is the interpreter of his intellect (rasūl al-rajul tarjumān ʿaqlihi).’ Elsewhere we find “an explicit correspondence between the intellect and the ‘inner’ messenger: the intellect is ‘the messenger of the Real.’ The revealed text is silent and ‘speaks’ only through the ‘interpreter’, the intellect…This view of the relationship between intellect and revelation rigorously excludes all literalism and superficiality, all attempts to confine meaning within a flat, unilateral reading. For it is this ‘inner prophet’, or inmost degree of consciousness, which is the ultimate basis on which one is able to confirm as true the verses of the outer revelation—to ‘validate’ them experientially and not just affirm them dogmatically. It is thus that the Imam says, in the first sermon of the Nahj, that one of the purposes of revelation, of the ‘sending forth of prophets’ by God was ‘to unearth for them the buried treasures of the intellects (dafāʼin al-ʿuqūl).’ “Being true to one’s intellect—to the treasures buried deep within it and not just to the rational functions operative on its surface—is tantamount to being ‘spiritual’. For Imam ʿAlī, the ‘true intellectual’ (al-ʿāqil) is defined as one who ‘puts all things in their proper place’. This in indeed the well known definition of justice as well and “only the true intellectual can, therefore, be fully ‘just.’” For the Imam: ‘Justice puts everything in its right place.’ “One is ‘just’ insofar as one gives everything its proper due, renders the ḥaqq due to each person, indeed to each and every thing in existence; and the ability to be ‘just’ in this demanding and universal manner is enhanced in the measure that one is attuned to al-Ḥaqq, the Real.”

Read in light of these points, the classical texts on Imam Ali’s privileged status and numerous traditions stating distinctions due to him – we find in series of works authored/edited/translated/compiled by Qasim including Al-Manaqib (original by Al-Mowfq Ibn Ahmed bin Muhammad Al-Makki al-Khawarzami), Seerat-e Sayyidna Ali (original by Ibn Hajr al-Haytami al-Makki), Hazrat Ali  ki Azeem Shaksiyyet ka ek Mukhtasar Ta’aruf, Hazrat Ali’s Testament, Fazail-e Ameer al-Mumineen Ali Ibn Talib (original by Imam ibn Hanbal)– could be better appreciated. Illuminating lives and sayings of Imams constitute a life’s treasure and “Door to Education” that our children aren’t exposed to adequately and even our ulama engage only tangentially. It is the domain of sages/urafa to best appreciate and explicate.

Original Headline: Invitation to the heritage of Imams