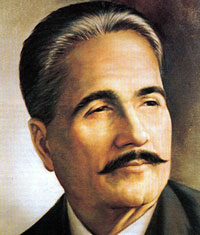 Iqbal thought that the West is a development of Islam.

Willy nilly, we live in the Eupropeanised world – our political institutions, our education, our economy, our sciences, our technology and our largely secularized post-theological world in which metaphysics as traditionally understood has been displaced from the centre stage – all testify to it. In Heideggerian terms one could say that modern man’s relation to Being is marked by encounter with Europe, its science and technology. In this technologised world, the world seen as a resource, God withdraws. Man is forced to live in a world where faith as it traditionally used to be is not available. In Iqbalian terms it might be rendered as a long night of waiting for God since the world has its own uses for destinies to be shaped (“Kare Jehan Daraz Hae Ab Mera Intizar Ker”).

We are in the world indelibly marked by colonial legacy and are paying for the choices we have made. We have adopted colonizer’s designed development project, technological culture, most of philosophical and scientific thought currents, addiction to a life style that is at odds with renunciatory ethic of world religions including Islam, large scale indifference to the world of the Sacred in education, politics, and culture. We have been, in Eliot’s words, coming closer to the dust and farther from God as we chose to be the race for information and knowledge at the cost of wisdom. Poets have no longer a prized place in our culture and one of the important tools for resisting alien domination has been left behind. Folklore, myths, rhymes, serials, films, novels, sign boards, art, architecture everywhere we see bear colonial legacy. Who knows or takes seriously likes of Askari and Saran in Pakistan or India respectively?

Iqbal’s plea for “a spiritual interpretation of the universe, spiritual emancipation of the individual, and basic principles of a universal import directing the evolution of human society on a spiritual basis” has been heard but not to an extent of making very noticeable impact. Iqbal the poet and the sage could be a possible resource for helping us out of the abyss we have pulled ourselves into. In an age where the ghost of nihilism is haunting us we have to turn to poets – or better sage poets – to show us the path of return to the Sacred. Iqbal is one such resource whom even Heidegger would have considered it worthy to explicate.

The job of a philosopher is to explicate great poetry according to Heidegger and he benefitted from. We have many Iqbals to choose from or appropriate today and I propose looking at Iqbal’s wisdom poetry primarily as something that has so far been largely ignored resource for fighting the negative impact of colonizer’s legacy and not shirking from appropriating its best that could be harmonized with spirit centric orientation of traditional or Islamic culture.

How do we look at the global domination of secularizing thought currents and the reign of instrumental rationality as seen in technologisation of the world? Iqbal thought that the West is a development of Islam. Iqbal says – and even Dr Israr notes it emphatically – that the core of the Western civilization is Islamic. Iqbal appropriated most of the defining features of Western modes of thinking in his work without breaking from traditional Islamic heritage.

The kind of intellectual Ijtihad he exercised has yet to be fully appreciated. Without delving in more detail on what Heidegger meant when he called attention to irreversible Europeanization of earth and how J.L. Mehta appropriates the same thesis from a more faith or tradition centric Indian perspective and how Iqbal in his own way has engaged with the same in an idiom that is still fresh, let us note what Iqbal, in the backdrop of colonial legacy he confronted, was pleading for in his poetry and prose. Iqbal pointed out how so many things we often construe as indigenous to our tradition are importations from elsewhere and what appears as western in certain cases is really development of Islamic spirit itself.

For Iqbal the sectarian debate on Fiqh schools, on illegitimacy of Sufism, prevalence of  negative attitude to the world, to reason, to science in the name of Islam/Sufism, fossilization of Madrasa curriculum, reluctance for absolute Ijtihad, suspicion of egalitarian democratic spirit are all legacies of imperialism, Western and others. Education in the sense Iqbal conceived it is almost absent today in Indian subcontinent, both in religious and secular schools. What the poets conceived and built in his dream has been ruined by the politician as he himself had feared.

As Iqbal has observed: “I am no longer concerned about the crescent and the cross; For the womb of time carries an ordeal of a different kind.” I think this is the central point in colonial legacy Iqbal seeks to address. And he addresses it in a way that some Muslims are suspicious of. Iqbal despite his Theocentrism fundamentally affirms affirmative transcendence, a more open embracing of what is the world of senses or nature and religious/cultural other.

Iqbal gives us enough arsenal against colonialism but we are hardly capable to use those arms. He requires becoming Aarifi Khudi and “Razi Kun Fakan.”. And here we can question identification of colonialism with Western domination. Western domination is Islamic domination in disguise, Iqbal would dare to say. Let us note with Hamid Dabashi in Resisting the Empire that East and West as identifiable structures of a binary are already gone (“Mashriq Sae Na Maghrib Sae Hazr Ker” “Daleeli Kem Nazri Qisayi Qadeem-O-Jadeed.”) We have now a world which is more Chinese (Eastern) than American, which has the likes of Rumi and Ibn Arabi as informal guides for millions of seekers, which seems to have been disenchanted with materialism. Plato and Aristotle, Ghazzali and Hallaj, Soharwardi and Mulla Sadra, Sankara and Nagarjuna, Confucius and Lao Tzu  are again at the focus of attention of academic, spiritual and intellectual elite. More people are now concerned about fighting pernicious influence of Colonialism in loosening of Tradition, forgetfulness of symbolism, disappearance of love from relationships, raping of the environment,  and loss of traditional economies. Colonial attitude is we forget  the dignity due to man by virtue of his being created in divine image – we no longer know why turban is worn and has designated folds. Colonial legacy is so attractive in some of its manifestations that we no longer ask if the given attitude is basically colonial. Bureaucracy and its paraphernalia is colonial. Sir Sir Culture means head and its dignity it owes due to intelligence is no longer there. “Khudi Kae Aarifoo Ka Maqam Hae Badshahi.”  And kings don’t behave like civil servants or their customers in Secretariats/Armies/Media Houses.

For Iqbal, “Islam is itself destiny and will not suffer destiny.” “There is no life for him who doesn’t adhere to a religion.” Iqbal observed about Bedil that, he, along with Ghalib, taught him “how to remain oriental in spirit and expression after having assimilated foreign ideals of poetry.” I argue that what appears to be alien postmodern orientation of currently dominant cultural formation can be appropriated today with the help of resources provided by Bedil and some other representative figures in sabk-i-hindi tradition including Iqbal. We could have far more meaningful engagement with major modern thinkers - likes of Heidegger, Wittgenstein, Focault, Derrida and Levinas – than is currently the case by focusing particularly on wisdom poetry of likes of Bedil and Iqbal. I argue that, living as we are, willy nilly, in the postmodern world struggling to overcome pervasive condition of nihilism, Bedil’s “romantic”- mystical orientation that echoes great figures in German Romanticism (Holderlin and Rilke) and American Transcendentalism and Blake amongst English Romantics can be appropriated to evolve a more informed and nuanced response to nihilism.

I am pleading for taking Iqbal and his contemporary Heidegger who outlived him by half a century seriously to help evolve a more comprehensive response to nihilism. It is no longer the problem of cross and crescent or even atheism and theism or usual binary of transcendence vs. immanence that man is asked to address. The question is of certain withdrawal of Being/Sacred to which not only Heidegger but even Schuon testify due to movement of history  or what is implied in doctrine of cycles or what our theology deals under the heading of end of times ordeal forcing “Descent into Hell” of which theologians such as Altizer talk about. Our saviours today are, according to many moderns including some theologians like Altizer, sage writers. If art has partially substituted religion in the modern world, and there are great difficulties with saving people with traditionally received idiom of religious narratives, the poets like Holderlin and Iqbal have much to help saving many of the stranded people in the post-theological and post-secular world.

Iqbal has been accused of complicity with colonial values for choosing Western style in appearance, in rearing his children, in his failure to practise Islam’s form in the standard or orthodox sense. Here I need to clarify that Iqbal has provided enough hints to meet these accusations in his Reconstruction and poetry. He had some reservations on classical compendiums of fiqh. I feel he would have supported much of the work of Ghamidi in the field of jurisprudence though not on Sufism and metaphysics. He would also support most reformist agendas that Muslim feminists and more traditionally rooted modern scholars like Fazlur Rahman have proposed.

Qalander Iqbal is too sublime a station to be appreciated by most mainstream Ulema and Fuqaha.  Sages are not to be judged in terms we find in fiqh and theology manuals as the author of Abaqat grants. One needs to be something (rather than merely see something from an academic viewpoint), to get an idea about grandeur of that which made Iqbal, Iqbal. He was probably one and only Ali Gunaeh as Shariati observed, one “genius” or better Danayi Raaz for a century who seems to have been patronized by the King himself. If one wants to appreciate the station of Iqbal consider reading opening Ghazals of Bal-i Jibriel and closing lines of Javid Nama. Reading Iqbal one reads much of the best in Islamic tradition to which Sufis, philosophers, poets and best minds in other streams from theology to jurisprudence to philosophy of history have contributed.