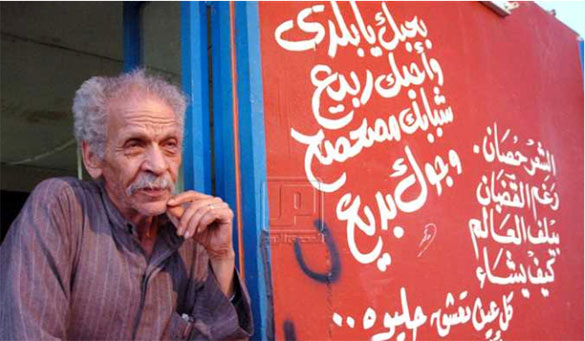 Poetry is born out of sufferings as the famous Arabic saying goes. Ahmed Fouad Negm (1929-2013), was a revolutionary poet of Egypt often called the poet of the Egyptian people. Born in a poor family, his father died at the age of six. And this sudden and tragic death of his father forced Negm to work as a domestic servant, hawker, laundry boy, and building worker. Negm has never been schooled beyond the Kuttub. His early schooling was interjected by sending him to an orphanage due to the financial crisis in the family.

Negm’s childhood was devoid of any parental warmth and love, his adolescence was occupied with odd jobs, his youth was filled with uncertainty and fear, and his adulthood was troubled with endless detentions and incarcerations. Henceforth, a new breed of the poet with hardened soul, and tough tongue starting a life-long war against all injustice, inequality, oppression, and harm imposed by the regimes to the poor, weak and destitute.

Suffering, pain, ordeal, and hate were his universe as the poet later recollected. Negm’s life can be explained by the total absence of love from his life, parents, friends, authorities, and religious rejection.

Negm criticized and shot verbal daggers at every Egyptian president he has lived under and never compromised/retreated from his strong/inner belief that his opinions/views were always justified. Be it President Abdel Nasser, Anwar Sadat, or Hosni Mubarak, he never compromised on his ideology and ethics. Even though President Nasser incarcerated Negm and swore to keep him imprisoned up as long as he lived. But Negm was not afraid of the storms of imprisonment, because he has learned how to sail his ship against the tides of the time. Once released from the prison chains he became more manifestly political taking daggers at the regimes. Anwar Sadat too sentenced him eleven years of imprisonment for a poem that mocked his television address, but somehow he was released after some time.

Poetry became his muse in and outside the prison. It was the prison that made him the poet of great calibre. Negm firmly believed that poetry and poetic form can act as an expression of resistance and opposition, which can be concisely exemplified from his poem ‘The Strike’:

How Sweet are the poems?

In the times of bitter hardship… and the songs

How sweet are the spoken words of love?

In times of privation.

Ahmed Fouad Negm went to jail nine times and spent all in all eighteen years of his life in Egyptian prisons. Different periods he spent in jail varied from two weeks to three years.

It was in (1959-62) that Negm was first imprisoned for three years for counterfeiting government papers, a period in which he seriously took up writing. During his first stint of prison, he also got to know great intellectuals like Syed Qutb and other literary giants. Negm later stated that three years he spent in jail turned his life upside down and made him a new human being adding “three years in which I discovered the poet who became the talk of the people afterward”. His incarceration sparked a new fire in him. Egypt’s prisons were already occupied, the nation was in a need of a voice to the voiceless and they found Negm at the ends.

Negm, after leaving the prison in 1962 met Sheikh Imam Isa a blind singer, composer, and oud player. They worked together for more than twenty years. The duo kept composing and singing political songs for many years. Albeit their songs were banned on Egyptian radio and television stations but they were very famous among ordinary people in the 1960s and 1970. Imam Isa rendered the poems of Negm into music, and this gained immense fame. Their revolutionary poems/songs criticizing Arab regimes especially after the remarkable defeat in the 1967 war led to may incarcerations and dentations on many occasions. The government was not ready to listen and bear this all. To silence them, and control their thought, to block their mind, the duet was again incarcerated. But nothing could deter their strong commitment.

Negm was influenced by the great literacy giants like Russian dramatist Maxim Gorky, whose novel ‘Mother’ he read in jail, and it made a profound effect on the poet. Apart from Gorky, he was also influenced by Turkish poet Nazim Hikmet and Spanish poet Federico Garcia Lorca.

Reading Negm, one is reminded of his remark that the function of poetry is “to change the world.” The key feature of his poetry was Egyptian’s dialect, playing with puns/criticism, obscenities/rudeness, and rhyming slang straight from slums or neglected rural areas of Egypt. His poetry inspired the generations of Egyptians, his poems and songs describe the struggle of the poor and working-class and satirized Egypt’s political rulers. Negm poetry written in colloquial Arabic has become a supporting cry for many protests. Remarkably in Egyptian revolutions of 2011, his poetry became the anthem of the millions of young protesters in renowned Tahrir Square of Cairo, to protest against President Hosni Mubarak. The protesters chanted the lines from his revolutionary poems like “Who are they and who are we”.

Who are they and who are we?

They are the princes and the Sultans

they are the ones with wealth and power

and we are the impoverished and deprived…

His other famous poem widely chanted in Tahrir square during 2011 by the protesters ‘The Brave Man is Brave’:

The Brave man is brave

The coward a coward

Come down with the brave

Down to the square

The poet throughout his poetic endeavor kept lashing at the political injustice, inequality, and oppression. Negm was well aware from the very beginning that the path he has chosen is dispersed with pain/suffering/, torture/trauma, arrest/allegation, and long spells of detention/incarceration. But the poet never bowed to any form of tranny whether social/ religious and political. He famously proclaimed in one of his poems:

If we are hungry

But we will never

Sell our words for a hundred silver coins.

The revolutionary and the people’s poet was translated into English by Prof. Mohamed F. El-Hewie entitled the translation as A Rebel unlike Any, Prof. Kamal Abdel Malek titled the translation as A Study of the Vernacular Poetry of Ahmed Fouad Negm, and Mona Anis named the translation as I Say My Words Out Loud. All these translations are profound engagement with the poet. He is often credited as the poet of poor, ‘Egypt’s Revolutionary poet’, ‘Master of vernacular poet’, ‘national security Agitator’, ‘Ambassador of the poor’, ‘Political comedy Guru’ and most famously the ‘king of Sarcasm.’ When died in 2013 the poet was mourned as ‘the king among stars’ is gone.

Ahsan Ul Haq is pursuing PhD from the department of English, University of Kashmir Srinagar