Conversion in Islam: From the Time of the Prophet Muhammad to the Era of Classical Islam, To the Modern Era

Socially Islam Provides an Escape from Much of the Western World, and Yet Offers Stability despite the Changes

1.    In the post-colonial states in Asia and Africa, establishment of social institutions by Muslims have led to an increasing turn to Islam.

2.    Islamic conversion has a long and successful history, becoming one of the largest religions in the world.

3.    Conversion through the cultural influence has found a place in the post-colonial world, particularly in Asia and Africa.

Conversion is a foundational aspect of religion, voluntary or by coercion it exists throughout history. Despite the prevalence and importance of conversion especially historically, understanding of why people convert can be flawed as described by Lewis R Rambo when he states “Theories of conversion often tell us more about the one making the attribution than the person or group that has converted”.

In this piece I am going to examine Conversion in Islam, and how it has evolved from the time of The Prophet Muhammad to the era of Classical Islam, to the modern era. Conversion in this piece will be taken to mean adopting of the religion of Islam and joining of Muslim communities in a social, cultural or political sense. Conversion will be split into three main areas and subsequent periods in this piece: the initial conquests during the first 150 years of Islamic civilisation (610-750), the classical period of Islam (750-1800+), and in modern post-colonial times (1950+).

Understanding why these people converted is an area of contention among researchers and scholars, Lewis R. Rambo mentions in his article Theories of Conversion: Understanding and Interpreting Religious Change.  Rambo in his article brings up several major theories of conversion from different schools of thought. Although his article is focused on discussing theories in relation to Islamic conversion, his analysis of theories is useful in outlining the multitude of different reasons of conversion, both in history and contemporary times.

The early Islamic Empires may have spread across the Middle East and North Africa very quickly, however it took centuries for Islam to become the dominant religion. Bulliet in his book Conversion to Islam in the Medieval Period develops an S-curve of five segments for measuring conversion in Persia. The S-curve is used further by Bulliet to compare the popularity of Muslim names in Persia, which he then uses in several other regions to estimate the progress in the S-curve of different regions.

Bulliets analysis estimates that it took roughly 100 years from conquest in Iran to progress to Muslims being 50% of the population, and it takes another 100 years more to reach 80% of the population. The other regions that Bulliet analyalised, which had previously had Christianity as the majority religion “Converted at approximately the same rate, taking into account the later date of conquest of Tunisia and Spain”. These indications of conversion of early Islam wasn’t of any mass conversions, rather being growing naturally as it becomes more normalised and popular in each region.

The understanding of conversion in this time is limited by the data that scholars have been able to gather, as Islamic chroniclers saw conversion as a personal non-political issue of faith. Alwyn Harrison in his article Behind the Curve: Bulliet and Conversion to Islam in al-Andalus Revisited readresses the theories put forth by Bulliet. Harrison covers critiques of Bulliets study, arguing that many of the critiques of Bulliets work have misunderstood it, “For 30 years, scholars have been mistaken in citing Bulliet’s conversion curve as proof”. The arguing of Harrison is that Bulliets work only was an estimate of the percentage of total converts over time, rather than being of the percentage of population. 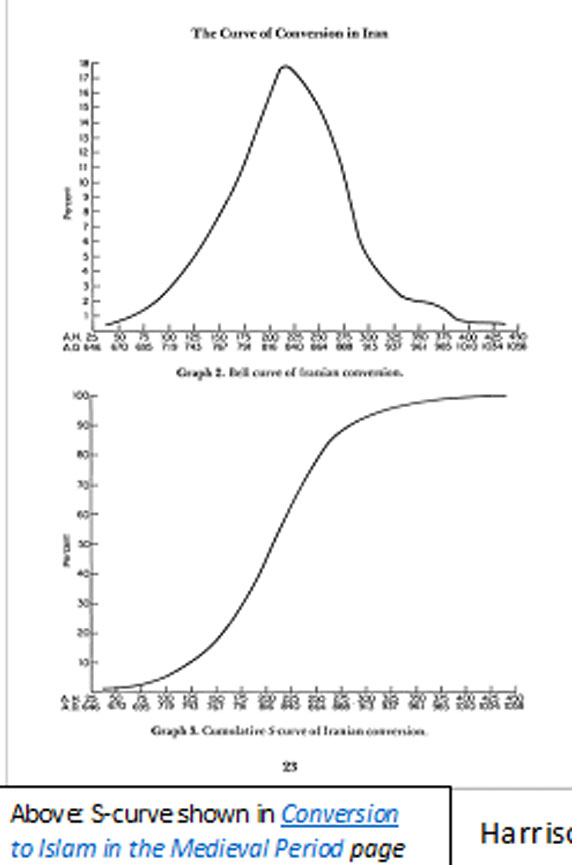 During this period the rapid, but not instant conversion is an indication that the spread of Islam during this time was broadly political and socially. Political by the change in leadership and the upsetting of local institutions, which were an extensive system in the Byzantine land of the initial conquests. Socially the conquests led to an Arab/Muslim domination which led to converts in the elites of the new territory, in order to maintain their status. This is an inherently elitist viewing of events, however the cultural paradigm would shift over time to accompany the rise of Islamic culture which would lead to more widespread conversion.

Anton Minkov in his book Conversion to Islam in the Balkans  builds upon and refers to the ideas of Bulliet in his attempts to analysis the conversion in Asia Minor after the battle of Manzikert in 1071. Minkov points out how the conversion in Asia Minor also only took the roughly four centuries that earlier regions did according to Bulliet’s study. Taking into account the work of Speros Vyronis in The Decline of Medieval Hellenism in Asia Minor and the Process of Islamisation from the Eleventh through the Fifteenth Century (of which I cannot find any English translations to verify) Minkov claims that the Islamisation of Asia Minor was only in a small part to do with conversion. Noting that the population of the region fell from roughly eight million to five million in the four centuries of conversion, during which time significant numbers of people from the Turkic tribes settled in the region. Following in the regards to the issues that have been mentioned prior, measuring conversion in Islam has some contention from limited information on the topic.

The expansionism of the Islamic empires in this period reached it zenith under the Ottoman Empire, but has subsequently been on a decline ever since. The Ottoman Empire with the taking of the Balkan peninsula of Europe can be considered the last time of significant expansion through force. Despite forced conversion being forbidden in Islam “There is no compulsion in religion” as laid out in verse 256 of chapter two, the Islamic empires incentivised conversion, both intentionally and not. Intentionally promoting conversion happened primarily through discriminating against non-Muslims with taxes such as the poll tax as well as the weakening of non-Muslim social structures and support networks. Unintentional promotion of conversion happened through the social stigmatisation, Muslim hostility, unfair treatment from the Muslim elites and legal systems. Understanding the impact of any of these factors will remain speculative, but it’s clear that for whatever reason most of the local communities did convert over the course of four centuries.

Forced conversions also were implemented on a large scale during this time, the primary example being the Devshirme system. In which the Ottoman sultans would forcibly recruit the children of Christian families to the army, in which they were castrated and forced to convert to Islam. Other forced conversions are less clear, such as in the case of slavery; where practices of a pious Muslim would be to free slaves upon their conversion to Islam. Which isn’t exactly forced conversion, but is clearly not an example of voluntary conversion.

During this time political conversion became increasingly sparing, as the conquests of new land became smaller and less secure, meaning that non-Muslim political leaders were less likely to acquiesce for personal gain. The rise of the Islamic civilisation during this time led to increasing cultural influence, particularly for the borders of the empires. The Turkic people converted during this time, and their increasing domination of Asia Minor and creation of a new Islamic culture and empire led to the longest lasting Islamic empire. Socially and culturally Islamic culture and society spread into Europe during this time, leading to increased trade and cooperation in this period.

In the post-colonial era of Islam, spread of the religion has been minor compared to the expansionist times of the Islamic empires. Instead conversion has been localised, and been primarily in the western countries or ex colonial states. Monkia Wohlrab-Sahr in her article Conversion to Islam: Between Syncretism and Symbolic Battle argues that “So the topic ‘‘Conversion to Islam’’ is not only about Islam, but also—and perhaps primarily—about the circumstances under which conversion takes place.” To argue her point, Wohlrab-Sahr makes a case about how conversion to a foreign religion (different to the normative) is a result of the convert’s social context deteriorating.  Wohlrab-Sahr in her study finds that women who have had “former personal and social connections have become unstable” have found a new point of stability with their Muslim partners.

Talking about a convert’s daughter who converted subsequently who was present during one of the interviews, the conversion led to a religious redefinition of her previous life. The daughter describes how “break with everything that used to be normal in the past” the article shows how she has become isolated from her previous social groups as a result of the conversion, and how the framing of returning to those groups is antagonistic to her newfound faith.

David E. Skinner in his article Conversion to Islam and the Promotion of 'Modern' Schools in Ghana covers the other aspect of modern conversions, that of the educational kind. Originating in colonial times, the English/Arabic schools mentioned were created to stop the conversion of Muslim children to the Christianity of the missionary schools, as well as to prepare them for future competition in professions. These schools were influenced by the idea of the teachers that had “intended the schools to become centres for missionary outreach among the local populations.”  As such the schools were seen as a way to convert the population by the Muslim teachers, of which seems to have been effective in regards to the successive sustained growth that English/Arabic schools in Ghana have experienced over the past century. By acting to counteract the spread of Christianity, these schools allowed the Muslim population to sustain and grow. The scale of conversion either implicitly by preventing potential conversions out of Islam, or by converting youth has led to a successful practice for Islamic conversion. This educational history has provided a foundation for the modern system of English/Arabic schools and their method of conversion and learning, which have been integrated into the school system of Ghana.

Modern converts are not the result of political force or opportunities as in times bygone, instead in western societies the social institutions of Islamic society has found a place which attracts converts. In other places conversion through the cultural influence has found a place in the post-colonial world, particularly in Asia and Africa. Politically motivated conversion has largely been related to history, political Islam has instead become focused on radicalisation.

Islamic conversion has a long and successful history, becoming one of the largest religions in the world. Politically, Islamic empires had a long history of strength which allowed it to dominate vast lands and power, peaking during the first few centuries when the lands were unified by singular entities which led to the conversion of the elites. Culturally Islam grew to be a massive influence which through the empires and trade, converts to Islam in this time grew increasingly due to the influence and prestige that was associated with the empires. The social reasons for conversion in historical times are less explicitly straightforward as the other two reasons are, however in the modern world Islamic conversion has spread outside of the borders of the Islamic countries. Socially Islam provides an escape from much of the western world, and yet offers stability despite the changes. In the post-colonial states in Asia and Africa, establishment of social institutions by Muslims have led to an increasing turn to Islam.  Islamic conversion has evolved throughout the ages to find its place in societies and for people to turn to, as a way to integrate into new groups or to better fit into a society in which they have found themselves in.

William Walsh is an International Relations student aspiring to work in the IR field. He is passionate about understanding and fostering communication between different cultural/religious understandings and historical backgrounds.