Significance of Tafseer in Understanding the Quran

The tradition of Tafseer (exegesis) of the holy Quran developed in the first century Hijri at the behest of Ummayyid caliph Abdul Malik. The first exegesis was compiled during his caliphate. Since after the death of the Prophet pbuh, the Islamic state expanded, Muslims felt the need to make the teachings of the Quran accessible to common Muslims across the world, the science of exegesis developed.

The verses of the Quran were not only revealed by the Archangel Jibreel to the Prophet buh but also Jibreel A.S. explained the meanings of the verses to the Prophet pbuh. The following verses are testimony to this:

"And when we recite it, follow thou the recital. Then lo! upon us (resteth) the explanation."(Al Qiyamah:18-19) 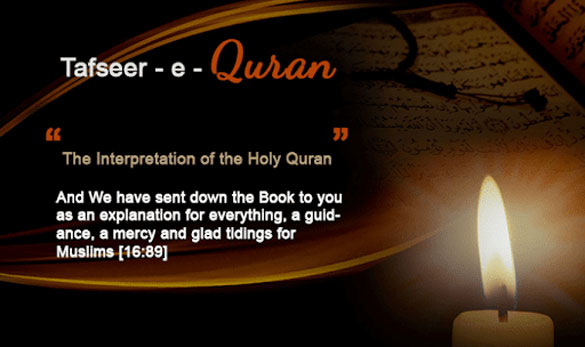 "We sent not a messenger except (to teach) in the language of his own people (Lisane Qaum) in order to make things clear to them."(Ibrahim:4)

"And no question do they bring to you but we reveal to you the truth and best explanation ( thereof).(Ahsano Tafseera)(Al Furqan:33)

The use of the word Tafseer in Surah Furqan justifies the tradition of Tafseer for the understanding of the Quran in a better way.

The first comprehensive Tafseer was authored by Imam Tabary in the third century Hijri. He compiled the exegesis with the help of the chain of isnad that were available till that time. His exegesis is considered the most reliable exegesis because of his balanced and scientific approach. This exegesis is called Ummul Tafaseer as almost all the later day tafseers have taken help from it.

Another significant exegesis is Tafseer Jalalayn, authored jointly by Jalaluddin Mahalli and his disciple Jalamuddin Suyut in the 16th century A.D. This exegesis is also very popular because of its conciseness and simple language.

After that, the science of exegesis developed and thousands of exegeses were authored in many languages. Some of them came in several hundred volumes which was not easy to read for the common Muslims. For example Tafseer-e-Hadayeq was written in 500 volumes.

In later years, exegesis of the Quran became a tool for propagation of different schools of thought of Muslims. The ulema of different sects and schools of thought interpreted the Quranic verses in order to establish their sect or group or ideology. Modern exegetes omitted or ignored the chain of isnad while explaining the verses so that they could present their own explanation.

For example, the Mutazilas interpreted the Quran from their own point of view and the sufi exegetes interpreted verses from sufi or Wahdatul Wujud point of view. Many Israilyats were also included in the exegeses. Haqayeq ul Tafseer is a sufi interpretation of the Quran while Tafseer al Ajayeb wal Gharayeb is based on far fetched explanation of the verses. These two exegeses have been rejected by ulema.

These sectarian exegeses made understanding of the Quran more confusing than clear.

"Now we have made the Quran easy for study and reasearch. Is there anyone who will ponder over them?"(Al Qamar:17)

Because of the unbalanced and unscientific approach of the exegetes of today, majority of ulema consider Tafseer Tabary the most reliable and dependable exegesis even today. A universally acceptable modern exegesis of the Quran based on modern scientific and social context is the need of the hour.