Are The Vedic Scriptures Not Wahi’ (Revealed By Allah)?

Why Aren’t The Vedic Scriptures, Revered As Wahi’ (Revealed By Allah) Among Indian Muslims Today?

1.    Why the Vedic Scriptures, especially the Texts known as Shruti or Śruti—the central canon of Vedas, Brahmanas, Aranyakas, and Upanishads—cannot be revered as Wahy’ (revealed by Allah)?

2.    Legacy of Mirzā Mazhar Jaan-e-Janan (1699–1780) should be recalled because he propounded an inclusivity between the Qur’an and the Vedas.

3.    India’s Hindus and those known as Sanatanis should be acceptable to Muslims as Ahl-e-Kitab.

4.    Letters written by Mirzā Mazhar contain an interesting discussion on the ancient Indian faith traditions and the Hindu Dharma in particular from an Islamic perspective.

If God sent Prophets and Apostles (Rasools) to the land of India like in all other historic territories across the world, then why the indigenous people of the subcontinent—from the Dravidians to Indo-Aryans—were not Ahl-e-Kitab (People of the Book)? And why their descendants and progenies today—call them ‘Hindus’ or more accurately Sanatan Dharmis—are no longer regarded ‘believers’? More fundamental question is: Why the Vedic Scriptures, especially the Texts known as Shruti or Śruti—the central canon of Vedas, Brahmanas, Aranyakas, and Upanishads—cannot be revered as Wahi’ (revealed by Allah)?

These are some of the key questions that this essay seeks to grapple with in light of the Letters (Maktūbāt) written by Mirzā Mazhar Jaan-e-Janan—India’s prominent Muslim Mystic, 18th century established Islamic scholar and Urdu and Persian poet-philosopher.

Also Read:   Proofs That Hindus Are People Of The Books

Mirzā Mazhar Jaan-e-Janan was a noted saint-scholar of the Naqshbandi Sufi Order, which was imitated in India by Khwaja Baqi Billah (d. 1603)—Delhi’s prominent saint-scholar and pioneer of the Order in the Indian sub-continent. The Naqshbandi Sufi Silsila (Order) came to India from Central Asia and believed in the divinity of love, and focused on a deeper personal relationship between Man and the Divine. But it also emphasised a healthy relation between people and the State and their constructive cooperation with the ruling authorities of respective countries. In the Mughal period, Naqshbandi Sufi masters continued in their endeavour to reinstate their place in the Indian subcontinent.

In today’s India, the legacy of Mirzā Mazhar Jaan-e-Janan (1699–1780) should be recalled not just because he was a prominent Sufi mystic of Naqshbandiyya and Urdu-Persian poet, but more because he propounded an inclusivity between the Qur’an and the Vedas. He found out that there is a beautiful spiritual synergy between the essential creeds and universal values of Islam and Sanatan Dharma and its variant faith traditions. Jaan-e-Janan was the proponent of the belief that the Indian Scriptures, especially the Vedic Texts were Wah’y (revealed by God). Therefore, India’s Hindus and those known as Sanatanis should be acceptable to Muslims as Ahl-e-Kitab—a term in the Qur’an which means “People of the Book” and is accorded reverence in the broader Qur’anic notion of ‘Believers’.

Also Read:  Quran’s Stand on the People of the Book

Shah Ghulam Ali Dehlvi—the 19th century Sufi master of the Naqshbandi tradition in Delhi—relays as to how he became the major disciple (Mureed) and successor to his Murshid, Mirzā Mazhar Jaan-e-Janan:

He [Jaan-e-Janan] was staying at Sirhind (a city in Punjab popularly known as Fatehgarh Sahib). I sought and obtained the permission to visit the master. My heart was instantaneously enticed and ensnared by the charismatic saint. He tied the game of his heart to the saddle straps of my spiritual courser. I was particularly attracted to the teachings of his Exalted Presence [Jaan-e-Jana], that the Vedas were Holy Scriptures revealed by Allah, and that Shri Krishna and Shri Rama were Prophets; thus Jaan-e-Janan privileged the Hindus as the ‘People of the Book’. (As quoted in “The Mirror of Beauty”, By Shamsur Rahman Faruqi, 2014).

Not only that Jaan-e-Janan considered the ancient Indic religions and the Vedas as divinely inspired but some of his Maktūbāt [letters and treatises] also speak so well of the Vedic texts in detail. Such Letters written by Mirzā Mazhar have been compiled by none other than his closest disciple Shah Ghulam Ali Dehlvi under the title “Maqamat-e-Mazhari” originally written in Farsi and later explained and further expanded in Urdu by Shah Abu Al Hassan Zaid Farooqi and Maulana Akhlaq Hussain Dehlvi. These letters contain an interesting discussion on the ancient Indian faith traditions and the Hindu Dharma in particular from an Islamic perspective. According to Mirzā Saheb, the Hindus and non-Muslims of the Indian subcontinent cannot be clubbed together with the Arab pagans of the Prophet's time, who were called ‘Kafirs’ (disbelievers) and ‘Mushrikin’ (polytheists). There is no scope of resemblance between the two entirely different peoples in different territories and times, belonging to diametrically different faiths. Jaan-e-Janan’s deeper reflections on this have been detailed in Maqamat-e-Mazhari. An in-depth study requires great deal of time and energy. Just for an instance—take a look at the following:

"The Sajdah [prostration] of Hindus to their idols is/was essentially “Sajda-e-Tahiyyat” (prostration in respect and reverence), not the “Sajda-e-Ubudiyyat” (prostration in worship) i.e. Hindus pay respect to their parents, spiritual masters and teachers by bowing down (or doing the Sajdah) in place of saying Salaam......Likewise, the Hindu belief in the doctrine of Awagaman (cycle of rebirth) is not akin to Kufr (disbelief).....All schools of thought in Hinduism are unanimously agreed upon the Oneness of God, and all of them consider the world as the creation of God. The mortality of this life (Fana), the law of Karma as the reward or punishment for the good or evil deeds, and the resurrection and accountability in the hereafter are common beliefs among them. They have got a deep insight into the oral transmissions and intellectual traditions, devotion and mediation, abstinence and austerities, enlightenments (M’arif) and divine unveilings (Mukashfaat)” (Letter No. 14, Maqamat-e-Mazhari, Page No. 258, Publisher: Shah Abu Al-Khair Academy, Delhi).

Also Read:   The Story of the Prophetic Mission of Muhammad (pbuh) From the Qu’ran (Part 6): The People of the Book and Jiziya

In this Urdu anthology authored by Shah Ghulam Ali Dehlvi and translated by Muhammad Iqbal Mujaddidi, the ancient Indic religions and civilisations have been looked at through the prism of Sufi Islamic perspective in the light of the letters written by Mirzā Mazhar Jaan-e-Janan. The Letter No. 14 examines the Hindu philosophy of Avatara, in accordance with the Islamic concept of Nubuwwah (prophethood). Based on the Qur’anic verses such as "There is a Messenger for every community" (Surah al-R’ad: 07) and “There was not a Nation without a warner” (36:06), the letter premises that Allah has created no community in the world without a Prophet, and that belief in all Prophets, not just one, is one of the six articles of the Islamic faith. The book then looks at the main characteristics of the Hindu belief of Avatarvad and Prophethood from an Islamic perspective. Other Hindu beliefs and doctrines like MahaMukt and their goals, have also been elucidated.

In conclusion, Jaan-e-Janan explains how Muslims in India should view the land of India and the Hindu community from a theological viewpoint: “In the Indian territories, Prophets and Messengers were sent by God. Their accounts are recorded in their books and several other signs and indicators tell us that the Hindu people had reached high culminations [in faith and spirituality]. The Divine mercy did not forget this vast land or its people and their state of affairs. Needless to say, before the Prophet Muhammad (PBUH), every nation was bestowed with a Prophet, and every community was entitled to follow their own Prophet rather than anyone else” (Letter No. 14, Maqamat-e-Mazhari, Page No. 259). 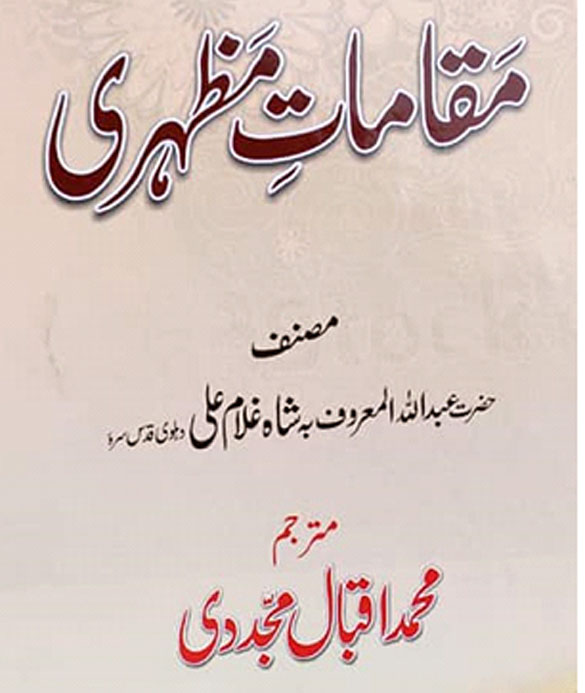 Finally, the Letter elaborates how Islam postulates the issues and applications of Nubuwwah (Prophethood), after the advent of Prophet Muhammad, and approaches the Shari’ah-centric view of it, with a rider: “silence is better when it comes to the Prophets of India, as the Qur’an has not mentioned most of them. We should neither consider their followers as ‘deviant’ or ‘disbeliever’ nor must we declare them all as entitled to salvation. Rather, we should intend well about them and form a fair and unbiased opinion”.

Also Read:  The Qur’an and the People of the Book: Chapter 13, Essential Message of Islam

Thus, the Letters by Jaan-e-Janan have found several significant similarities between both Islam and Hinduism and their basic postulates like Tawheed (Oneness of God), Akhirat (Hereafter) and Awagaman (Cycle of Re-birth), etc. However, the Hindu concept of Avataravad and the Islamic doctrine of Nubuwwah have striking differences, though they share similarities especially in their ultimate purposes. Avataravad is directly related to God’s divine incarnation which does not exist in the conventional Islamic Prophetology. However, in Indian Sufism inspired by the Bhakti tradition, the divine incarnation of Prophet (PBUH) has often been invoked.  Famous Urdu-Awadhi poet from Ghazipur (Uttar Pradesh), 'Asi Ghazipuri (d. 1917) popularly known for his Sufi Kalam composed in his divan (collection of poems) these couplets:

The couplet can be loosely translated as:

“The One and only who prevails over the Divine Throne as God, has descended in Madina as (Muhammad) Mustafa”.

Also Read:   Ahl-e-Kitab: The Status Quran gives to Jews, Christians and other People of the Book in an Islamic State, though Muslims do not accept that any more

Traditions like this popularised the belief among a section of Muslims in some parts of India especially in the Bengal region in pre-colonial times that while Shri Krishn was a Prophet of God, Prophet Muhammad was Krishna’s Avatar in Arabia. Notably, there is a hadith attributed to Prophet Muhammad (PBUH) in which he is reported to have said: “There was a prophet of God in India who was dark in colour and his name was Kahan [Krishna]”, as quoted in the History of Hamadan Dailmi (Chapter Al-Kaaf). Noted scholar on Indian history before 1800, Richard Maxwell Eaton (professor of history at the University of Arizona) who extensively worked on the Sufi genealogies in pre-modern India, has unravelled this glorious and little-known aspect of Indian Islam, in his book “The Rise of Islam and the Bengal Frontier, 1204–1760”.

The reason why it is significant to bring Jaan-e-Janan back to the memory and consciousness of a modern Indian Muslim is explained by Annemarie Schimmel, an important German scholar on Sufism. She tells us in her book “The Veneration of the Prophet in Islamic Piety” that one of the four pillars of Urdu poetry and Muslim mysticism in India, Mirzā Mazhar Jaan-e-Janan studied Hinduism in depth and discovered Allah’s Apostles and Prophets in India and thus sanctified the land of India.

Also Read:     The Qur’an’s Regard for the People of the Book (Christians and Jews) And the Believing Humanity– A Living Testimony

By according this spiritual significance, historicity and sanctity to the ‘sacred land’ of India, Jan-e-Janan fostered a wide embrace for one and all in this divine scheme of love and harmony. The belief of God as the infinite source of all love and compassion must enlighten the minds and hearts of the young generation today even after the martyrdom of the Divine Lover many years ago on the 10th of Muharram in 1780. Regrettably, Mirzā Mazhar Jaan-e-Janan was killed by a gunshot, because in his poetry he composed a few verses in praise of Maula Ali which the fanatics of his time misunderstood and took as his ‘heresy’ and thus slayed his voice.

Ram-iz-Rasool is a columnist with New Age Islam.