Indian Muftis and the Subject of Eid Prayer During Lockdown

How to perform Eid prayer during the lockdown?

Important points discussed in this article

Five people can offer Eid prayer in a mosque or Eidgah.

The Chasht prayer, according to jurists [fuqaha], is a commendable (mustahabb) act for those who miss the Eid prayer 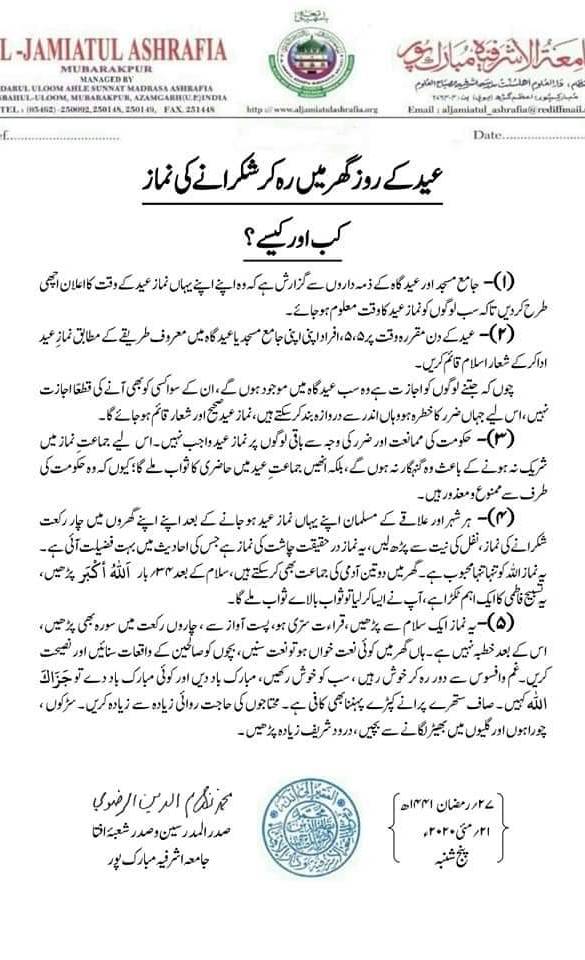 Mufti Nizamuddin Razvi issued an announcement from Jamia Ashrafia Mubarakpur last year which is also applicable this year. The announcement consists of the following five paragraphs:

2. On the day of Eid a group of five people should offer Eid prayer in their respective mosques or Eidgahs according to the well-known method and thus they can fulfil the obligatory symbolic representation (Shiar) of Islam.

Since all the people who are allowed will be present in the Eidgah or the mosque and no one except them is allowed to come, so where there is a danger of harm, the door of the mosque can be closed from inside (so that the number of worshippers cannot increase), the Eid prayer will be valid and the Shiar of Islam will be established.

3. Eid prayer is not obligatory on the rest of the people due to the government's prohibition and suspicion of the harm of disease. Therefore, they will not be sinners because of not participating in the congregational prayer. But they will be given a reward equal to the congregational Eid because they are forbidden and disabled by the government.

4. After the Eid prayer is offered by as many Muslims as are allowed inside the mosque, the rest of Muslims of every city and every region should individually offer four rak'ats of thanksgiving prayer in their homes with the intention of supererogatory (nafl) prayer. This is in fact the prayer of Chasht also known as Duha prayer, which has a great virtue in the hadiths. Performing this prayer individually is liked by Allah Almighty. You can also perform it with a congregation of two or three people at home. After the salutation of the prayer, recite Allah Akbar three times. This is an important part of Tasbeeh-e-Fatimi. If you do this, you will get reward after reward.

5. Perform this prayer with one salutation (Salam). Reciting of the Quranic verses and Tasbeehat during Namaz should be in a low voice. Recite Surah in all the four rak'ats. After this prayer, there is no sermon (Khutba). Yes, if there is any Naat-reciter at your home, you can listen to the Naat in his voice. Tell the children about the events of the righteous and pious predecessors and saints and guide them to good faith and deeds. Stay away from sorrow and grief. Keep everyone happy. Congratulate them and if someone congratulates you, say to him Jazak Allah. It is also enough to wear old but neat and clean clothes. Take care of the needy people as much as possible. Avoid crowding the streets, intersections and roads. Keep reciting Durood Sharif as much as possible.

Can Eid prayers be offered at home by a few people apart from those who are allowed to offer it in a mosque or Eidgah? In a declaration issued on May 9, 2021, Mufti Hasan Raza Noori from Idara-e- Shariah of Patna writes in response to this question: "Eid prayer can't be offered by few individuals together at home".

Darul Uloom Deoband also issued a written announcement regarding Eid prayer last year, an excerpt of which is as follows:

“People who are not able to offer Eid prayers will be exempted from Eid prayers due to excuses and compulsions. Therefore, there is no need for them to be upset. It is better for them to individually offer two or four rak'ats of Chasht prayer at their respective homes, because for those who are unable to perform Eid prayer, the jurists have declared mustahab (commendable) the two or four rak'ats of Chasht prayer mustahab.