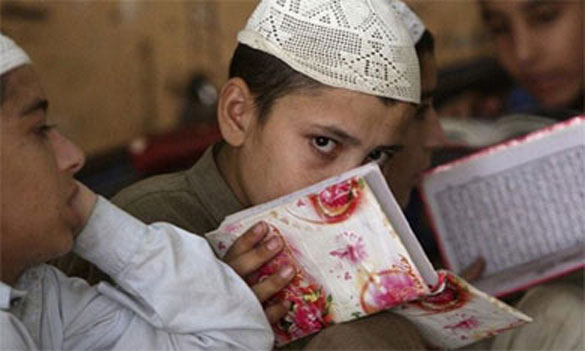 ------------
SITTING cross-legged on the floor of the prayer area of a mosque in a low-income locality, a score of children in the 9- to 14-year age group sway back and forth memorising the Holy Quran. Their teacher, who is also the muezzin of the mosque, has agreed to let us in and talk only after he is assured that the identity of his madrasa will not be revealed in the newspaper.

“We do not have anything to hide,” the teacher says. “But we will attract unnecessary attention if the mosque is mentioned in your news. The police were here a couple of months ago and we volunteered every bit of information they demanded about the madrasa administration and its students.”

This seminary was once famous for having Afghan children as its resident students. It is no longer so. “All these children you see here today live in nearby localities and come here every evening to learn the Holy Quran,” the teacher says. “We no longer offer courses in neither Dars-i-Nizami, nor do we admit resident students, be they local or from outside the country. The madrasa with foreign students will always attract the agencies,” he concludes.

The Madressahs, or Islamic religious schools, which are widely accused of spawning intolerance, extremism, sectarian violence and militancy in the country, have been under the scanner since the bloody attack on Peshawar’s Army Public School in December last year.

The National Action Plan (NAP) to combat militancy and extremism, formulated in the aftermath of that tragedy, also proposed registering and regulating seminaries that have so far operated outside the government’s oversight.

The plan, it is said, is aimed at cracking down on Madressahs fostering militancy and extremism, cutting off the conduits of foreign funding to them and deporting foreign students enrolled with them. The government, officials say, also plans to “gradually purge their curricula of hate and sectarian content and pull them into the fold of the mainstream education sector”.

The Madressahs have five Wafaqs or boards that represent five different sects and operate the seminaries as well as control the curricula taught. All five have rejected the plan to register and reform the Madressahs, saying it is being done “at the behest of the Western powers”, and pledging to resist government efforts to put any restrictions on their independence.

Indeed, the administrations of prominent seminaries are far less hospitable to journalists today than ever before. “Why don’t you write on other aspects of the action plan, such as the Karachi operation? Why another story on Madressahs? You will create another issue [around Madressahs] if you write on them?” Maulana Mujibur Rehman, a spokesman of Jamia Ashrafia in Lahore, argues.

The Punjab government claims it is successfully implementing the provisions of the action plan regarding the registration of Madressahs and their foreign students in the province. “We have completed the geo-tracking of the seminaries in Punjab,” says Shuja Khanzada, the provincial home minister.

There are 13,800 Madressahs in the province and the provincial government now plans to start their ‘geo-fencing’. “This means that we will now collect complete data on mobile phone numbers in the use of their officials and monitor their calls,” Khanzada explains.

According to data collected by the government, there are around 480 foreign students enrolled with the seminaries in the province whose visas have expired. The details of these students have already been provided to the embassies of their countries and they will shortly be deported from Pakistan. “We’re only waiting for federal funds [for buying their tickets back home],” the minister says.

The number of foreign students with valid visas and who are enrolled with seminaries in the province is said to be in excess of 400. The government does not plan to extend their visas like it used to on the request of the seminaries.

However, many analysts consider the actions thus far implemented by the government to regularise the Madressahs as far from satisfactory.

“The government again seems to be in a state of denial. The more crucial aspects of the plan to regulate the Madressahs are yet to be implemented,” argues Mohammad Amir Rana, the director of the Pakistan Institute for Peace Studies in Islamabad. For example, he says, the process (for finalising the modalities) of registering the seminaries has so far not been completed by the interior ministry because of strong resistance (from the Wafaqs). “Similarly, the provincial governments appear reluctant to tackle the issues of hate literature and content taught at the seminaries. The provinces are afraid of the street power of the madrasa students.”

Arsalan Khan, an anthropologist focusing on religion in Pakistan, feels that the term “madrasa reforms” used by the government lacks clarity. “It is not clear as to what the government wants [to achieve],” he asserts. “The implementation of certain actions [like the registration of Madressahs] is easy. But the government will be faced with strong resistance if it tried to change the contents of Dars-i-Nizami.”