Let Us be clear About the Facts: Pakistan’s Blasphemy Law Does What the Holy Prophet (pbuh) Refused To Do 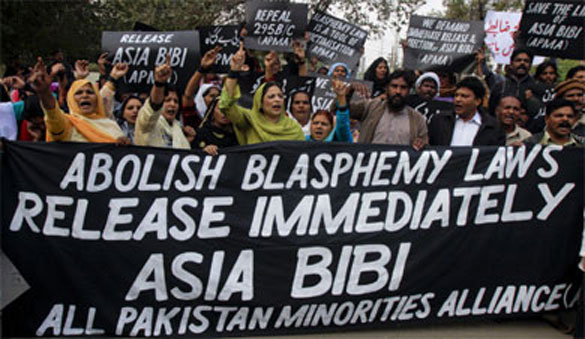 Governor Salmaan Taseer was martyred for calling Pakistan’s blasphemy law, introduced by a military dictator, a draconian law, or as he called it “a Kala Qanoon” (black law). The Supreme Court of Pakistan in its judgment in the Mumtaz Qadri case laid down clearly that it was not blasphemous to criticise the blasphemy law. Five years have passed since the dauntless Taseer met his death unwaveringly, refusing to bow down to the very end. In these five years, NO ONE no Pakistani politician, no intellectual and no civil society activist has had the moral courage to say it openly. It must be said repeatedly however if we want Pakistan to become a progressive and modern society.

The fundamental truth that we must reckon with as Pakistanis is that the blasphemy law is not just morally untenable and ultra vires the constitution of Pakistan, to speak nothing of Pakistan’s international obligations, but it is, first and foremost, against the very doctrine of the great man whose honour it purports to protect; it is blatantly un-Islamic and militates against the spirit of that great faith: Islam. There are no two opinions about the issue: Prophet Muhammad (PBUH) refused to harm even those who caused him the gravest of harms. A woman who would throw garbage in his way was not only spared but, when she fell ill, was cared for by the Prophet (PBUH) himself. The Prophet (PBUH) forgave even Hind whose abuses against the Prophet (PBUH) and his family were legendary. Countless poets, naysayers and offenders were similarly forgiven. The Prophet (PBUH) emphasiaed mercy and forgiveness. Revenge and bitterness were concepts for lesser human beings, and never for the Prophet of Islam whose mission was nothing but mercy for all mankind. What we have today are lesser human beings masquerading as his followers.

The blasphemy law also violates the Constitution of Pakistan, in particular Article 10-A, which promises due process and fair trial to every person in Pakistan. In the poisoned atmosphere in the post-General Zia period, the idea that anyone accused of blasphemy can ever get a fair shake under Pakistani law in a Pakistani court denotes an impossibility. Remember Rashid Rahman? He was gunned down for the crime of representing a blasphemy accused. Lawyers are routinely pressurised by religious goons. What due process or fair trial can a person accused of blasphemy ever hope to receive? The law is fundamentally bad and wholly draconian in nature. A bad law cannot be administered fairly. This legal truism is truer still of all the offences against religion provisions of the Pakistan Penal Code (PPC). Badly worded, and often in contradiction to common sense, these sections of the PPC are an affront to any person’s sense of justice and fair play. Mercifully, no one convicted under this law has been executed by the state so far. Mercilessly, however, more than 50 such accused have been dispatched to the hereafter by either a violent mob or to an individual would-be soldier of the honour of the Prophet (PBUH).

The law itself is used repeatedly to settle old scores. Property disputes are resolved often by accusing a person of blasphemy. The easiest thing that a person can do to another person is to accuse him or her of blasphemy. Asia Bibi learnt that when she, a Christian, dared to drink water from the same well as Muslims. She was accused of blasphemy and now faces capital punishment. The religious clerics who laid siege to Islamabad in late March are baying for her blood. She is just another victim of this unjust, unfair and un-Islamic law.

It is true that a large section of Pakistani society is, unfortunately, riled up by the false religious frenzy created by the so-called religious leaders for whom the whole blasphemy issue is a profitable enterprise. It is an enterprise that feeds many mouths. It is always this section that stands in the way of progress, seeking to retard the march of humanity in this country. Unmindful of the damage they have done to Pakistan and its image globally, they continue to press for this reactionary medievalism, strengthening the hands of Pakistan’s critics. The world laughs at the self-inflicted miseries of our homeland. Many others question whether Pakistan should have existed in the first place. By inflicting upon ourselves this and other draconian laws, we have managed to draw a big question mark on ourselves.

It is for our own sake that we must abolish the blasphemy law once and for all. The basic principle that we must accept is that the state has no right to prosecute individuals for their freedom of expression and religious belief. This -- the state must realise -- is not necessarily a western secular principle, but is derived directly from the explicit injunction of the Holy Quran that no one has the right to compel another to follow a faith. The Holy Quran envisages nothing less than complete freedom of speech for every human being. It does not impose in anyway any prior restraint on any individual, be it Muslim or non-Muslim. The clearest duty on the part of any thinking Muslim in Pakistan today is to join the campaign to abolish the blasphemy law.

Murjia Muhammad is a freelance columnist