Malala’s Calling The Muslim Terrorist ‘You Are Not A Muslim Anymore’ Is Reminiscent Of The Tale Of The Naked King, And A Shaming Challenge To The Violent Extremists Of Islam And Their Tacit Allies 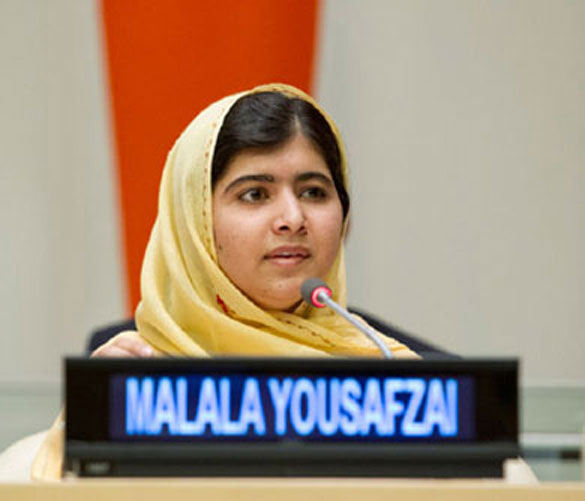 The link to the text of Malala's speech is:

Since the spike in terror attacks in the name of Islam over the past years, the Muslim Ulema have condemned the terror outfits in no uncertain terms, but they have fallen short of expelling them from their fraternity. While faith is between the individual and God and technically no Muslim can call another a non-Muslim, Caliph Umar was compelled to outlaw a brutally fanatic band of his followers that called itself Muhakkima (the executors of the commands of God) – he branded them Kharijites -those who forfeited claim to the faith of Islam on account of their unrestrained brutality.

Another reason for the Ulema’s reluctance to ‘outlaw’ wanton terrorism in the name of Islam is conceivably a false notion that Islam may have really spread by sword and forced conversion and that what Abu Bakr Baghdadi was doing was consistent with the practice of the Prophet as he claims; and if they openly challenged him, they might incur sin. Drawing parallel from ancient tales, such Ulema are like the King’s courtiers who did not have the courage to say that the King’s tailors were stitching in thin air for fear, if they spoke what they really saw they may incur the wrath of the King. Finally, when the King was marching in his New Clothes it was a little ‘Malala’ in the crowd to shout, ‘the King has no clothes.’ On April 13 in the Parliament of Canada the real Malala of this era – not afraid of anyone, said aloud what the Ulema and scholars of Islam have been afraid to say: “when you pick up a gun in the name of Islam and kill innocent people, you are not a Muslim anymore.”

In broad historical perspective, the rise of terrorism in the name of Islam is a conspiracy by extremist Muslims to transform Islam from an inclusive religion of peace, tolerance, harmony, compassion and gender justice  to an exclusivist religion of violence, intolerance, conflict, hatred and deep misogyny. The ISIS and its affiliates are at the frontlines of this conspiracy, while the extremist Ulema are its sleeping accomplices. But their conspiracy is exposed.

Malala is heard by millions of Muslims and gone unchallenged.

In Feb, 2015 Summit to combat Violent Extremism, Barrack Obama, the then US President dismissed the premise that “they (the terrorists) are holy warriors (in defence of Islam), because it is a lie.”

US President Donald Trump, however, does not see disconnect between terror and Islam like the extremist Ulema and calls it radical Islamic terrorism, making a distinction between the ‘radicalized Islam’ and the Islam of the global Muslim community.

In a nutshell, the anti-Islamic and conspiratorial character of the Muslim terror outfits of this era is fully exposed. Now that the world superpowers are determined to wipe them out, and ISIS and other terror outfits are losing ground at a rapid pace, the euphoria of an Islamic Caliphate is over, the earlier their sleeping sympathizers disown and marginalize them the better. The longer these groups linger on the greater and bloodier will be the fallout. The fate of these outfits is sealed as noted in these words in this writer’s joint exegetic work dated June 1999.

“…the violent extremists – the modern Kharijites and Qaramites, of Islam are no more than poisonous sediments of history, and like their counterparts of almost a millennium ago, they are bound to be increasingly marginalized, and eventually jettisoned from the world of Islam.”

In the backdrop of the foregoing, it has become imperative for the Muslim Ulema, intelligentsia and their sleeping/ extremist counterparts to take the author’s following articles (dated Oct. 2013, Feb. 2015) seriously and act as solicited:

Call for International Fatwas to Declare the Terrorists Who Advocate Wanton Killing of Innocent People in The Name of Islam as ‘Terrorist Apostates’, Like the Kharijites Of Early Islam

Declare the ISIS as The Kharijites (Those Who Seceded from Islam) As This Article Demonstrates and Declares: Global SOS To the Ulama, Muftis, Intellectuals and Scholars of Islam