Don't jump to conclusions; it is not the Muslim thing to do.

Muslims never had the freedom to speak out, even though freedom of speech is one of the greatest values of Islam.   Quran positively asserts on freedom – there is no compulsion, period!

In the 1400 years of our history, we did not get a chance to question anything lest the tyrant deputies of Caliphs (after the first four righteous ones), dictators and Monarchs would make us disappear in a hurry.  Thank God for the western societies, and in particular America and Canada, we have the Allah given freedom to cherish and enjoy the life and have nothing to complain. The Verse from Sura Rahman 55:13 (Y. Ali) perfectly describes our situation, "Then which of the favours of your Lord will ye deny?"  None! We can think, write, speak, and question everything in America, Alhamdu Lillah (Praise the Lord)! 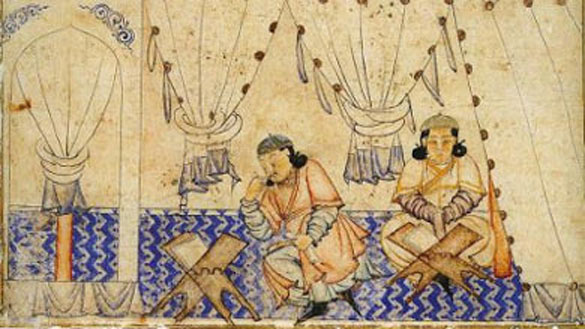 Over a period of time, the books written by Ibn Taymiyyah, Ibn Kathir, Hasan Banna, Qutub, Maududi and their likes have been unfortunately equated with Quran. While Quran is eternal guidance, their work was a product of their times, and whatever they wrote was  a knee jerk reaction to the tough situations they were dealing with, and certainly lacked the universalism of God and the Prophet that Quran preaches, both were referred to as God of the Universe and Mercy to the Universe respectively.

The Country of Jordan is under pressure to remove the books of Ibn Taymiyyah, and Egypt has already done that. This goes against the freedom of speech; we cannot undo the books that are already written, even though they are wrong.  Instead we should produce books that are reflective of Islam – of equal treatment, non-judgmentalism, justice and mercy to all of the humanity.  Good books will chase the bad books out of circulation.

Had God wanted, he would have wiped Satan out, but he chose to keep him and let him tempt humans to go astray, while he gave us guidance to stick to the right path. It was the question of free will and freedom to choose again, it is a God's gift to humanity.  They should not have wiped the books, they could have stored them in a Library and marked,  "these were the books written by scholars of the past, and should not be equated with Quran. They are flawed." 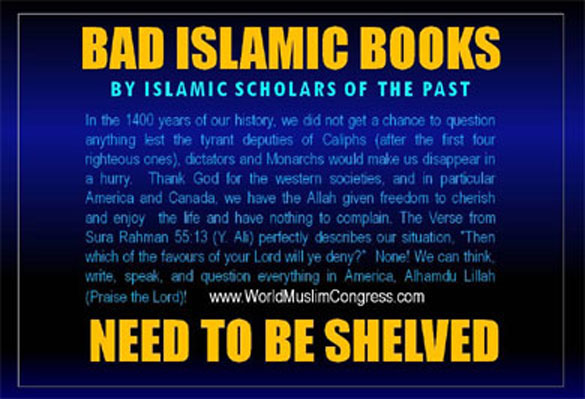 My conservative friend Ryan Mauro asked, "What actions should be taken when mosques include these materials in their libraries as authoritative texts, though? " The response should be consistent with freedom, "Those books should be locked up and made available for research, and or labelled "Questionable book - finding the truth is your own responsibility".

Why Are Those Books Wrong?

Quran mistranslations: Verse 1:7 reads – God help me walk the right path, and not the path of those who went astray or earned your anger.  Now, the people of that time probably asked Ibn Kathir, who were the people that went astray? He was neither resourceful nor his audience had the ability to reason – he said, Christians!  And those who earned his anger? He said, Jews!  Good lord, that is not only wrong, but sinful to misquote Quran. I gave a full power point presentation of Chapter 1:1- 1:7 at the Parliament of World’s religions in Melbourne in 2009 to a shocking audience, and that is another full story.

Let’s reason with Ibn Kathir without defending him, he lived from 1300 and 1373 A.D., right after the crusades, and he must have felt that would be the right answer after what the European men did to Muslims in the name of Christianity.  Six hundred years later in the 1920’s Hilali Khan translated Quran, and adopted what Ibn Kathir wrote, whereas the other two translations from the same decade by Yusuf Ali and Picktall did not.

It was very irresponsible! Indeed, copy of that translation was freely distributed to millions of Jews, Christians and Hindus, all you had to do was call the toll free number and you get the book. This translation was the source of Islamophobia, and rightfully so, why should a "Muslim God" tell them to hate Jews and Christians? The bad translation created a Muslim God out of a single God for the whole humanity. Thank God, that translation was corrected in 2012, but there are still many verses that need correction (check outwww.QuraanConference.com for the list of the verses).

What about Sharia Books?

Allah's Sharia (a way of life) in Quran (2:225-245) says, “Those who intend to divorce their wives shall wait four months; if they change their minds and reconcile, Allah is the forgiver, merciful. If they go through with the divorce, then Allah is hearer, knower.” (The wives have the exact same rights)

American Sharia (a way of life) gives 3-6 months waiting period to finalize a divorce, except in Nevada where it requires half that time.

Sharia Laws (or Men’s Sharia) allows, "The man can utter divorce three times in a row" and the marriage is over. The woman who had built her life with him, and raised the children is out on her own." This is not Islam and this is not Quran.

Somewhere in our history, we took off on the wrong path, or we were prevented from questioning Quran, Prophet, Allah and Islam.  I thank the lord for blessing me with that ability, and as a result, I have a very strong faith in Islam.  I was able to reject all that was dished out to me, and learn Quran afresh from a critical point of view; from the pluralistic point of view.  I questioned everything.  Now, the more I question, the more wisdom I find in Quran about sustaining cohesive societies.

I feel sorry for the faith of some of my fellow Muslims who do not have the confidence in the books they believe. Once I challenged Pastor Robert Jeffress and did the same with Pastor Terry Jones, “I will give you the right translation of Quran, take your time, and then we will discuss in public, and if you find three faults in Quran, and we agree to it, I would give up my religion and join you.” Such was my faith, a strong Imaan and I feel sorry for the weak faith in those men who thought the Pastor may find faults in Quran. I can never forget an Imam telling me that I should not have challenged him, what if he finds three faults?  The man did not have faith because he never learned to question.

The free speech is an enduring value and the hallmark of civilizations, and we simply cannot compromise on it, however much a few may abuse it. We believe in free speech and that is the only way societies will grow. As Muslims we seriously appreciate the gains we have had, that far outweigh the tensions given by a handful of miscreants.

Quran Positively Asserts On Freedom – There Is No Compulsion, Period!

We need to honour the freedom of speech, in the long term that is what will endure.

Mike is a speaker, thinker, writer, pluralist, TV-Radio commentator and a human rights activist committed to building cohesive societies and offers pluralistic solutions on issues of the day. His info in 63 links at MikeGhouse.netand writings at TheGhouseDiary.com