Wahhabism Is A Distorted Version of Islam: Wahhabi Ideology Declares - Follow My Ideology Else Get Ready to Be Killed

Will the global Muslim community raise its voice for the restoration of the holiest of Islam’s revered sites that were destroyed by the Wahhabis?

The five centuries-old Babri Masjid in Ayodhya was demolished on December 6, 1992 by a Hindu mob, mostly comprising diehard Kar Sevaks (volunteers) of the Vishva Hindu Parishad led by Sangh Parivar leaders. Intellectuals across the globe, irrespective of caste, creed and religion condemned the demolition, as did the Supreme Court (SC). No sane person will justify the demolition of the Babri Masjid but the bigger heinous crimes of massacres, multiple demolitions and destruction of the holiest of religious and heritage sites, shrines, relics have taken place in Saudi Arabia. This was done at the behest of its Wahhabi/Salafi rulers of Zionist ancestry who, wearing the cloak of Islam, in the middle of the 18th century introduced a new and distorted version of the faith based on terrorism. The demolished and desecrated holiest of Islamic religious places included the birth place of Prophet Mohammad.

Wahhabism, the new, distorted version of Islam, aimed to capture worldwide political power using terrorism. The dreaded terrorist, Abu Bakr Baghdadi, is one such example of this diabolical plan. This negative ideology was created by one Sheikh Najdi ibn Abd-al-Wahhab, in association with a Bedouin tribal leader Muhammad-ibn-Saud. Wahhabi ideology should not be mistaken as Islam’s tenets, although its practitioners shrewdly camouflage their real identity under the cover of Sunni Islam and associate the names of their terror groups with typical Islamic names, such as the Islamic State of Iraq and Syria (ISIS), and so on.

Wahhabi ideology manifestly declares, “Follow my ideology, else get ready to be killed.” According to renowned British historian and writer Charles Allen, all dreaded terrorist organisations like the ISIS, the Taliban, the Al-Qaeda, the Lashkar-e-Taiba, the Boko Haram, and so on, follow Wahhabi ideology. And, Abu Bakr Baghdadi’s ISIS, following the Wahhabi ideology alone, murdered more than 20 lakh people. A majority of them were Muslim youth in Iraq, Syria, Afghanistan and other parts of the world.

On December 6, 2019, the day marking the 27th anniversary of the demolition of Babri Masjid, several review petitions were filed in the SC by individuals who were party to the case. The pleas were supported by the All India Muslim Personal Law Board. Earlier, the Jamiat Ulema-e-Hind had also filed a review petition against the order saying justice can be done only by ordering the Centre and the UP Government to build the mosque at the disputed site.

Also Read:  Do Muslims Need to Disassociate Themselves from Salafi, Wahhabi Ideologies of Permanent War with Non-Muslims And Moderate Muslims? A New Age Islam Debate

Surprisingly, the entire Muslim community across the globe, including the intellectuals, remained silent spectators when Saudi ruler Abd-al- Aziz, the son of Muhammad ibn Saud, who was also the son-in-law of Sheikh Muhammad Najdi ibn Abd-al-Wahab, the founder of Wahhabism, in 1802 attacked Karbala in Iraq. He allowed the desecration of the shrine of Hazrat Imam Husain (grandson of Prophet Mohammad).

Giving the details of the attack,  Charles Allen in his book, God’s Terrorists: The Wahhabi Cult and the Hidden Roots of Modern Jihad, has quoted Lieutenant Francis Warden who wrote, “They pillaged the whole of it and plundered the tomb of Hazrat Imam Husain, slaying in the course of the day, with circumstances of peculiar cruelty, about 5,000 of the inhabitants. A huge amount of booty was seized.”

In 1803, Abd-al Aziz ibn Saud obtained a visit permit from the Shareef of Mecca on the pretext of performing Haj, whereupon his Wahhabi fighters laid waste Islam’s holiest shrine the Ka’aba, wherein Muslims across the globe perform the ritual of Haj. Abd-al Aziz ibn Saud followed in the footprints of Yazid who had earlier desecrated Ka’aba in 682 AD.

According to TE Ravenshaw, author of A Memorandum on the Sect of Wahhabis, “They robbed the splendid tombs of the Mahomedan saints, who were interred there and their fanatical zeal did not even spare the Prophet’s Mosque (in Medina), which they robbed of the immense treasures and costly furniture to which each Mahomedan Prince of Europe, Asia and Africa had contributed his share.”

In 1804, a Wahhabi gang crossed the great desert in the Hijaz and destroyed tombs of Prophet Mohammad’s family members at Jannat-ul-Baqi, the ancient cemetery of Medina, and even despoiled the grave of the prophet. After this, the Wahhabi gang reached Mecca and demolished another heritage site, the cemetery of Jannat-ul-Mualla, where the ancestors and other close relatives of Prophet Mohammad are interred. Again, on April 21, 1925, Wahhabis demolished the shrine of Prophet Mohammad’s daughter Hazrat Fatima Zehra as well as those of his grandsons, namely Imam Hasan, Imam Zain ul Abideen and Imam Mohammad Baqir. The shrines are still lying demolished and the Saudi Government does not repair them or allow pilgrims to offer prayers at the revered sites. 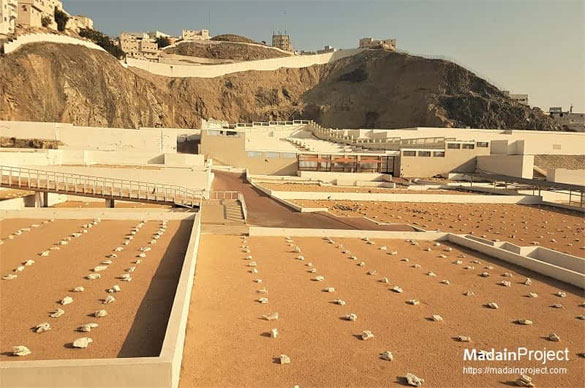 Jannat ul-Mualla: Many of Muhammad's relatives were buried in this cemetery before his Hegira in 622

Again in 2014, a leading Saudi academic had proposed to destroy the tomb of the Prophet Mohammad in Medina with the mala fide intention of removing the remains of the Prophet from there and burying them anonymously in the Jannat-ul-Baqi cemetery. However, the nefarious plan to destroy the tomb under the custody of Saudi monarch Abdullah was exposed by another academic, hence it could not be executed. Had it been executed; the motionless Muslims would have remained calm as the perpetrators were Wahhabis in Muslim attire and not people from any other religion. 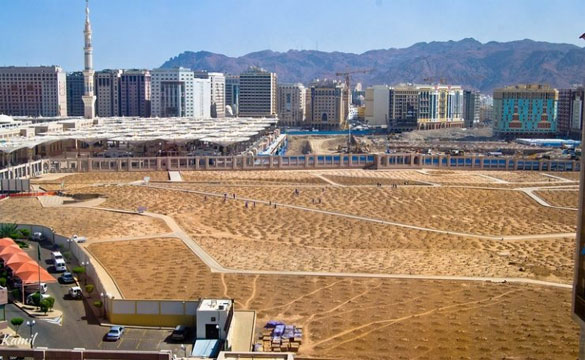 View of Jannatul Baqi with Masjid-e-Nabwi on the left

In India, those who demolished the Babri Masjid are still facing trial in the Special CBI Court at Lucknow, under various sections of the Indian Penal Code. In all, there are 32 accused and the apex court has directed the Special CBI Court to conclude the hearing by September 30 this year. Till now the CBI has presented 351 witnesses before the court.

What legal action has the Saudi Government or the groups of Muslim countries taken against the perpetrators of mass destruction and demolition of heritage and revered sites and massacres committed by Wahhabis feasting on Saudi petro dollars and spreading terrorism in the name of Islam? There is a deafening silence on that account.

The cacophony created by the Muslim leadership and millions of their followers on the matter of Babri Masjid may be based on the presumption that its perpetrators were Hindu bigots and the thugs behind the demolition of the holiest of Islamic sites, like the Jannat-ul-Baqi in Medina and the Jannat-ul-Mualla in Mecca, were Muslims. It matters little to them that the perpetrators of the crimes against Islam are Muslims just in name.

Will the global Muslim community raise its voice and take a conscious decision for the restoration of the holiest of Islam’s revered sites of religious and heritage importance that were systematically destroyed by the Wahhabis? If they don’t it will smack of hypocrisy and bigotry.

Hasan Khurshid is a legal journalist and author

Original Headline: Why the double standards on demolition of holy places?