The Shaltoot Fatwa of Al-Azhar University, Shia-Sunni Conflict and Road to Peace

Theological Differences, Curbing the Rising Violence between Sunnis and Shias Is Possible

2.    The goal of the Shaltoot Fatwa of Al-Azhar was to establish peace and harmony between Sunnis and Shias.

4.    True, the theological differences between Sunnis and Shias will continue, but the scholars of the two sects can work to create peace and harmony and curb suicide bombing.

Al-Azhar, the famous historical religious seminary of Egypt, is the only university in the Islamic world that is highly regarded throughout the Islamic world. Prominent scholars from around the Muslim world turn to this magnificent historical seminary and proudly add "Al-Azhari" to their names after completing their higher education. This university has always been known for its crucial role in the promotion of moderation in the Muslim world. The efforts of the university to bring people of different religions together are admirable. Extremism, Takfirism, and terrorism have always been condemned. The Al-Azhar Shia Fatwa is one such effort to combat rising Sunni-Shia extremism, Takfirism, and terrorism.

The Al-Azhar Shia Fatwa, known in Arabic as the Shaltoot Fatwa, is reported to be an Islamic fatwa issued in 1959 on the topic of Shi'a–Sunni relations by Sunni scholar Shaikh Mahmood Shaltoot. The fatwa, as an outcome of a decade of collaboration between Sunni and Shia academics, was promulgated at the theological centre of Al-Azhar University, Dar al-Taqreeb al-Madhahib al-Islamiyyah (Centre for bringing together the diverse Islamic schools of thought). The Fatwa recognized Twelver Shi’ism as a ‘legitimate Islamic school of law’.

The goal of this fatwa was to bridge the gap between different Islamic schools of thought, as well as create mutual respect, understanding, and appreciation for the contributions of each school to the development of Islamic jurisprudence. Despite the ecumenical fatwa, while Shaltoot was Grand Imam of Al-Azhar, he refused to establish an autonomous Shia chair at the university, which was one of the greatest wishes of Shia members of the theological centre of the university.

Egyptian President Gamal Abdel Nasser is credited with inspiring this exceptional fatwa, which allows Shias, Alawites, and Druze into mainstream Islam after centuries of being deemed heretics and idolaters. Nasser envisioned it as a means of expanding his appeal and influence throughout the Arab world.

English Translation of the Shaltoot Fatwa

1) Islam does not require a Muslim to follow a particular Madhhab (school of thought). Rather, we say: that every Muslim has the right to follow one of the schools of thought which has been correctly narrated and its verdicts have been compiled in its books. And, everyone who is following such Madhahib [schools of thought] can transfer to another school, and there shall be no crime on him for doing so.

Muslims must be aware of this and therefore avoid unfair prejudice toward any one school of thought, because Allah’s Religion and His Divine Law (Shari'ah) were never limited to one school of thought. Almighty Allah accepts their jurists (Mujtahidoon), and it is permitted for "non-Mujtahids" to follow them and follow their teachings in worship (Ibadaat) and transactions (Mu'amilaat).

Original copy of the Fatwa: 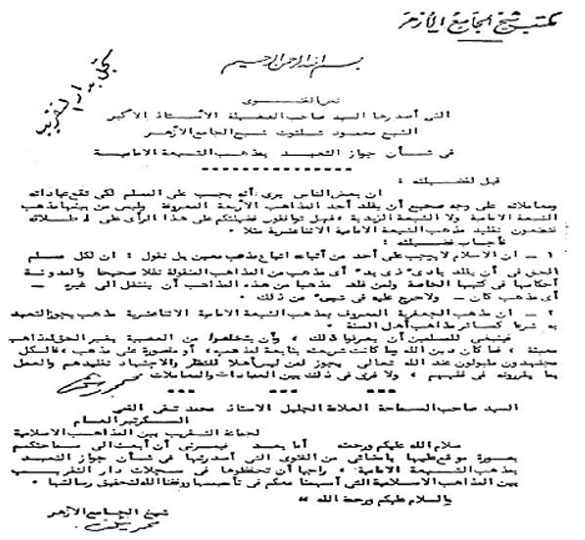 As a result of a slide toward Islamism in Al-Azhar and the rise of the Muslim Brotherhood in power in 2012, the head of the Faculty of Islamic Studies at Al-Azhar fiercely condemned the Shaltoot Fatwa (1959). He forbade worship according to the Shia tradition and condemned as heretics anyone who insulted the wives or companions of the Islamic prophet Muhammad. Al-Azhar also produced a book denouncing Shias during the time. However, Shaykh Ahmed el-Tayeb of Jamia Al-Azhar reaffirmed Shaikh Shaltoot's views in an interview after the Egyptian coup d'état in 2013.

Ahmed Mohamed Ahmed El-Tayeb is a leading Sunni Islamic scholar and the current Grand Imam of al-Azhar and former president of al-Azhar University. He was appointed by the Egyptian President, Hosni Mubarak, following the death of Mohamed Sayed Tantawy in 2010. Reaffirming the Shaltoot Fatwa, he rejected the notion of Takfir concerning Shia Islam. The following is a transcript of his interview with the Egyptian television channel ‘Al Neel’.

Question: Do you believe there is a problem with Shia beliefs?

Answer: Never, 50 years ago, Sheikh Mahmoud Shaltoot, the then-Chancellor of Al Azhar, issued a fatwa stating that Shia School is the fifth Islamic school and equal to the others.

Question: What should we do if our children convert to Shia Islam?

Answer: Allow them to convert and embrace the Shia School. Do we condemn someone who abandons the Maliki or Hanafi schools? These students are just leaving the fourth school and joining the fifth.

Question: Is it right that the Shias are becoming our relatives and marrying our children?

Answer: What's the big deal about this? Marriage between people of two different schools of Islamic thought is legal.

Question: Is it true that Shias have their own Quran?

Answer: These are the old women's myths and superstitions. The Shia Quran is identical to ours, and even the script of their Quran is similar to our alphabet.

Question: 23 clerics of a country (Saudi Arabia) issued a fatwa declaring Shias to be unbelievers (Kafirs) and heretics?

Answer: Because Al-Azhar is the only authority that can issue fatwas for Muslims, the fatwa mentioned above is invalid and untrustworthy.

Question: So what does the difference—being raised between the Shia and the Sunni—mean?

Answer: These discrepancies are the result of foreign forces seeking to foment war between Shia and Sunni Muslims.

Question: I have a serious question: "If the Shias reject Abu Bakr and Umar, how can you call them Muslims?"

Question: (Surprised by the response, the reporter inquires) Shia has a basic problem, which is that “they claim that their Imam of the time (Imam al-Asr) is still alive after 1,000 years.”

Answer: Why isn't it feasible that he's still alive? But there's no reason why we, as Sunnis, should believe the same way they do.

Question: (Referring to Shia Imam Mohammad Taqi al-Jawad, the 9th Imam, the reporter asked) The Shias believe that one of their Imams was only eight years old when he became Imam; is it feasible that an eight-year-old child could be the Imam?

Answer: Why can't an eight-year-old child be the Imam if an infant in a cradle can be a prophet (Hazrat Jesus/Isaa peace be upon him)? It's not unusual. Although we as Sunnis may not embrace this belief, it does not harm their Islam, and they are Muslims.

The Shaltoot Fatwa and Shaykh Tayeb’s Interview must have been an attempt to curb the growing violence between Sunnis and Shia and bring them together on the path of mutual peace and respect. On the ground, however, they have not yet been shown to be effective. Suicide bombers continue to target Shia mosques and Imambaras. All of this is a product of the doctrinal and theological divide between Shias and Sunnis, as well as the concept of Takfir.

True, there will always be theological differences between Sunnis and Shias, but earnest attempts can be made to raise awareness among the two sects of Islam that those differences should not be exaggerated to the point of murder, bloodshed, or suicide bombing. Scholars from both sides should work together to launch a campaign to educate ordinary Shia Sunni Muslims about the risks of permitting doctrinal disagreements to turn into bloodshed, suicide bombings, and violence. This is the platform on which Shias and Sunnis can agree and develop a unity-in-diversity relationship.

Related Article:    If Shias And Sunnis Cannot Be United On Theological Grounds, What Is The Possible Approach To Prevent Bloodshed And Suicide Bombings Against One Another?