It is evident that the claim that "Islam condemns building edifices over graves for whatever reasons" is failse since Islam has condoned the edifices over the graves of the Prophet (saws), his Companions (ra), and the pious `Ulema since the early centuries. Was Islam so weak back then as to be unable to stop the edifices being built, as it is weak today and incapable of stopping the destructive hand of those at work in the Hijaz, destroying those very grave sites? What is condemned is to build such structures for worldly considerations such as pride, luxury, or imitation of non-Muslims. 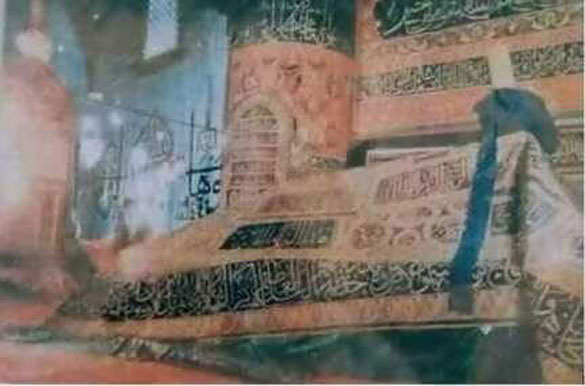 The topic of tombs is present in the Qur'an. The verse from Surat al-Kahf is in fact adduced by some to illustrate the permissibility of tombs. Those who say "Islam condemns" when in fact the reverse is true, silence themselves through lack of proof. Their (lack of) authority should definitely be exposed as uninformed and unethical.

The reply to the claim of a close relationship 'between graves exaltation and rearing the causes that lead to associating other gods -no matter how minor and in whatever form - with Allah Almighty' is that this is gibberish by and for unthinking minds. "And speak not, concerning that which your own tongues qualify (as clean or unclean), the falsehood: "This is lawful, and this is forbidden," so that ye invent a lie against Allah. Lo! those who invent a lie against Allah will not succeed."

Now for the proofs and Fatawa of the `Ulema on the issue of tombs:

The first Sahabi buried in the cemetery of al-Madina, al-Baqi`, was `Uthman ibn Maz`un (ra), the milk-brother of the Prophet (saws). The latter placed a large boulder on top of his grave to mark it, saying: "By this I shall know where the grave of my brother `Uthman is and add to him my relatives." Abu Dawud and others narrated it.

A stronger proof than any non-Mutawatir text is the universal practice of the Umma from the earliest centuries in building up tombs over the graves of those celebrated for their piety so that they would find them easily during their visitation, as ordered by the Prophet (saws): "Visit the graves." Hence Fatima (ra) had also marked the grave of her uncle Hamza (ra) with a rock, as she used to visit it every Jumu`a.

Imam al-Shawkani admitted that the Salaf built up the graves high. Concerning the Hadith of `Ali ordering the destruction of tombs in the Sahihayn, Sunan, and Musnad with various wordings:

Ibn al-Jawzi in al-Tahqiq said: "This [Hadith] is understood to refer to the elevated graves they used to build with high and beautiful structures." Al-Zayla`i mentioned it in Nasb al-Raya.

Imam al-Nawawi in his Sharh Sahih Muslim said: "The Sunna is that the grave not be raised up a lot above the earth['s surface], nor rounded, but that it be raised up approximately a hand-span (Shibr) and flattened, and this is the Madhhab of al-Shafi`i and those [of the other schools] who agreed with him, while al-Qadi `Iyad related that most of the `Ulema prefer it to be rounded [in the shape of a mound], and this is the Madhhab of Malik."

Al-Shawkani in Nayl al-Awtar added to this that it is Haram to build them up high and he claimed that the fact that the Salaf and Khalaf built them up high is no proof that it is not Haram, and al-`Azim Abadi approved him whole-heartedly in `Awn al-Ma`bud.

But the Amir al-San`ani in Subul al-Salam said: "The Jumhur - vast majority - hold that the prohibition of building up and plastering graves is one of preference (Tanzih) [i.e. not strictness (Tahrim)]."

Indeed, there is nothing wrong in signalling the graves of the Auliya, as stipulated by Shaykh `Abd al-Ghani al-Nabulusi and others. See the article by Ustadha Umm Sahl under the subtitle: "Domes over the Grave of the Auliya."

The use of the word "stone" in the previous Hadith, if authentic, indicates that the Prophet's (saws) grave was built up with stone already in the time of Abu Ayyub al-Ansari (ra).

The Ulema cited two reasons for the permissibility of building up the grave or plastering it with gypsum: to protect it from collapse generally speaking, and to keep it in the public view if it is the grave of a Shaykh, a Scholar, or someone from the family of the Prophet (saws) as mentioned in Ibn `Abidin's Hashiya (1:601).

Shaykh Isma`il Haqqi said in his Qur'anic commentary Ruh al-Bayan under the verse "The mosques of Allah may only be built and maintained by those who believe in Allah and the Day of Judgement, perform the prayers and give Zakat, and are afraid of none other than Allah and they are those who are guided" (9:18):

Shaykh `Abd al-Ghani al-Nabulusi said in Kashf al-Nur `an Ashab al-Qubur ("The Unveiling of Light from the Occupants of the Graves") the sum of which is that a good innovation that agrees with the objectives of the Sacred Law is called a sunna. Thus, building domes over the graves of Scholars, friends of Allah (Auliya') and the righteous and placing covers, turbans and cloth over them is permissible if the objective therein is to create reverence in the eyes of ordinary people so that they will not disdain the occupant of that grave.

If the above were not the case, or if it were not in conformity with the Sunna, then ponder the statement of our Mother `A'isha in Abu Dawud's Sunan: "When the Negus died, we were told [i.e. by the Prophet (saws)] that a light would be seen perpetually at his grave."

May Allah enlighten our understandings, our hearts, and our graves with His kindness and forgiveness. Amin.