Islam: A Religion of Peace or Violence? The Evidence in Quran - Part 1 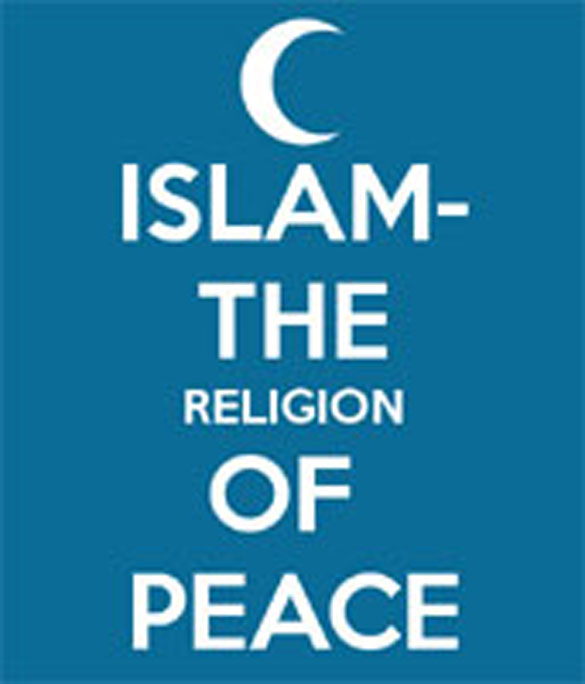 The holy Quran propagates peace, establishing a special case for promoting peace. It can be understood by the fact that it considers Iman (faith), which is derived from the Arabic word Amn (peace), as a great reward to mankind. Spiritual experience of having Faith in Allah leads us to the fact that human beings are free from all fear and attain peace as a consequence. The holy Quran gives glad tidings to the believers,

“He will replace their fear with peace and security so that they will worship God alone and consider no one equal to Him” (24:55)

A saying of the Prophet (peace be upon him) talks about peace in return of fear;

Allah will help the human beings in establishing peace to such an extent that a woman shall be able to undertake a long journey from Madina to Al-Hamra or even a greater distance than this without any escort, fearlessly, and no thief or robber shall be able to scare her. (Musnad Ahmad bin Hambal)

The holy Quran establishes that peace is a great blessing of Allah for the humankind. Referring to this value, Allah says in the Quran,

“Who provides them with food against hunger and with security against fear (of danger” (106:4)

One of the verses of the Quran explicitly makes it clear that the real intention behind the revelation of the Quran and sending down the Prophet (peace be upon him) is to open the ways of peace for the humankind. That verse is as follows;

“There has indeed come to you a light from Allah (i.e., Muhammad [blessings and peace be upon him]) and an Enlightening Book (i.e., the Holy Qur’an). By this Allah guides those who seek His pleasure to the paths to peace (and security) and takes them out of darkness (of ignorance and disbelief) by His command and leads them to the light (of faith and guidance) and directs them towards the straight road.” (5:15-16)

One of the Quranic verses clearly establishes this fact,

“O believers! Holding fast to the cause of Allah, bear witness based on justice. And let not (even) the extreme hostility against a people provoke you into abstaining from justice (in their case). Always do justice, (for) it is closer to piousness. And fear Allah. Indeed, Allah is Well Aware of your works.” (5:8)

Islam as a religion has played a significant role in promoting peace and justice ever since its inception. However, it is ironical that some people consider Islam to be a faith of war and violence. If we see it in the present context, we find that it is mainly because of the so-called Muslims who have assigned a completely wrong meaning to Jihad and approximated it to violence and oppression.

If we study the Quran as a whole, we reach the conclusion that permission of fighting was given in defence against injustice and wrongdoings. In modern context, we can understand that fighting was permitted against terrorism. The Quran testifies to this fact,

“Permission (to fight in defence) is granted to those against whom (aggressive) war is waged. (This permission is granted to them) because they were oppressed and Allah is doubtlessly All-Powerful to help them (the oppressed). They are those who were unjustly expelled from their homes simply because they said: ‘Our Lord is Allah.’ And had Allah not been repelling one (aggressive) class of human society by the other (through defensive struggle), the cloisters (temples), synagogues, churches and mosques (i.e., religious centres and places of worship of all religions) would have been ruined where Allah’s Name is abundantly commemorated. And whoever helps (the Din [Religion] of) Allah, Allah surely helps him. Allah is indeed All-Powerful, Ever-Dominant.” (22:39-40)

“What has happened to you (Muslims) that you do not fight in the cause of Allah (for the freedom of the oppressed and the elimination of terrorism against them), whereas those weak, helpless and tyrannized men, women and children who call out (for their freedom): ‘O our Lord! Rescue us from this town whose (affluent and influential) people are oppressors, and appoint for us some guardian from Your presence, and make someone our helper from Your presence’?” (4:75)

It is interesting to note that the Muslims were given permission to wage war against oppression, terrorism, wrongdoings and in order to protect the weak and the helpless people but they had to do this defence under great constraints.

“And fight (in defence) in the cause of Allah against those who impose war on you. (Yes,) but do not exceed limits. Surely, Allah does not like those who exceed limits.” (2:190)

This verse refers to the fact that Allah dislikes violence and excess. He approves of war only when there is no way left. This can also be deduced from another verse that if the enemies, during war, seek reconciliation, it is indispensable for Muslims to make reconciliation, as Allah says,

“But (do not fight) those who have allied with a people that between you and them there is a (peace) treaty, or who (losing heart) come to you in such a state that their breasts are afflicted (with this obsession) whether they should fight you or their own people. If Allah had so willed, He (strengthening their hearts) would have given them supremacy over you. Then they would certainly have fought you. So if they keep away from you and do not fight you and send you (a message) for peace, then (in the interest of peace) Allah has left no way open for you (to launch any aggression) against them.” (4:90)

A similar point has been referred to in the following verse;

“And if they (the combatant or hostile disbelievers) incline to peace and reconciliation, you also incline to it and put your trust in Allah. Surely, He alone is All-Hearing, All-Knowing.” (8:61)

So far, we have seen that the Quran wants to promote reconciliation and establish peace. We also take out the meaning from the above discussion that the Quran allowed its followers to wage defensive war only in the case of protecting the weak and downtrodden people without exceeding limits and this does not make Islam a religion of violence. Hence those who have been misrepresenting the verses of the Quran related to permitting war in defence against the religious oppressors and have been applying them to kill innocent people living in peace are actually violating the real purpose of Islam, that is, establishment of peace.