Materialistic World Is A Place of Temptation, Trial and Test Called Fitna in Quranic Terminology

1.    Fitna is an Arabic word that means temptation, test, trial and misguidance in the Quranic usage.

2.    Common believers are prone to temptations, it is only the Prophets that are way ahead of it.

3.    It is the mistakes and sins of the believers that manifests the forgiveness of Allah, the Most Forgiving. 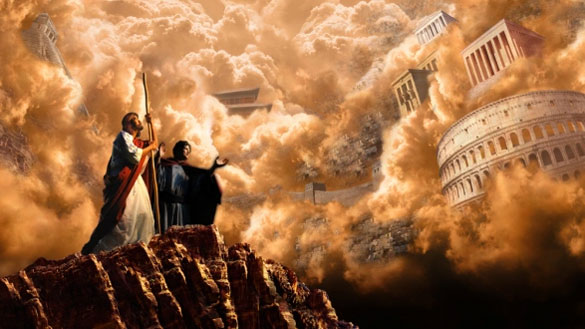 Photo Courtesy: Gralefrit Theology/ How the ‘Temptations of Jesus’ relate to everthing about you, society and the world

Fitna is an Arabic word that means temptation, test, trial and misguidance in the Quranic terminology. All these expressions are inter-related because the human being is tempted to take the misguided path and resultantly tested with trials by Allah, the All-Knower before being forgiven.

‘By Him in whose hand is my soul, if you did not sin Allah would replace you with people who would sin and they would seek the forgiveness of Allah and He would forgive them.’ (Muslim)

And Allah, the Most Forgiving says in the Holy Quran:

Say, “O My servants who have transgressed against themselves [by sinning], do not despair of the mercy of Allah. Indeed, Allah forgives all sins. Indeed, it is He who is the Forgiving, the Merciful.” (Quran 39: 53)

The above mentioned beautiful verse of the Holy Quran creates a soothing feeling in the hearts of the believer as in it they are reminded of the ‘forgiving’ trait of Allah, the Creator of the universe. This verse invites believers to strongly hold the rope to the righteous path and make their faith stronger.

The materialistic world is a place of Fitna. At every step, the human being is tested with a lure of having satanic belongings that put a human being on trial and Allah test his belief in Him.  For every person, no matter how much worldly gains does he acquire, there is a temptation of earning more. This is because there is a more wealthy or powerful or big person than the other. The temptation to be better than all others is taking humankind on the unrighteous path that leads to a forever punishing life hereafter. Most of the time we notice such lured to temptation people being punished by the social bodies, legally authorised to maintain just in the society, as well. Many of the people that are trapped in the allurement of the materialistic gains are the losers both in life here and hereafter.

Almost all religions have warned their followers of the dangers of temptation and satanic allurement. Islam has mentioned Satan and their dangerous designs that tempt people to the wrong path. There are various incidents of satanic temptations that have brought dangerous consequences for the believers. The Satanic trials and temptations have got mentions from the period of Adam and Eve and Hazrat Ismaeel Zabihullah. Satan tempted Hazrat Adam (AS) and Hazrat Hawwa (AS) into eating the forbidden fruit and tried his best to allure Hazrat Ismaeel Zabihullah into foregoing his decision to obey his father Hazrat Ibraheem Khalilullah for his sacrifice in the path of Allah’s pleasure. Thus for common people, Satanic temptations are very easy to be trapped.

Practical ways of defeating the temptation are to keep oneself busy in Zikr and maintain a positive thinking attitude having faith in the forgiveness of Allah and remembering that ‘every soul has to test death’.

Allah the Most Gracious has warned believers of being tested so that they could prove their worthiness for a permanent heavenly abode. The Quranic Ayat and the Prophetic traditions are guidelines for the believers to take heed and save themselves from falling into the traps of temptations and trials. Some of the many Quranic Ayat and Prophetic traditions mentioned below are for the human being to follow and be out of the tempting allurements of the evils so that they pass through the trials and the tests taken by Allah, the Almighty.

In the following Quranic Ayaat, the world Fitna is used in different terms such as trial, test, misguidance and temptation etc. Consider the following:

"And know that your worldly goods and your children are but a trial and a temptation (Fitna) and that with Allah there is a tremendous reward" (8:28).

"Our Lord! Make us not a test and trial [Fitna] for the unbelievers, but forgive us, our Lord! For You are the Exalted in Might, the Wise" (60:5).

"Your riches and your children may be but a trial [Fitna], but in the presence of Allah, is the highest reward" (64:15).

“Then, verily, your Lord for those who emigrated after they had been put to trials (Futinoo) and thereafter strove hard and fought (for the Cause of Allah) and were patient, verily, your Lord afterward is, Oft‑Forgiving, Most Merciful” (al-Nahl 16:110)

“And fight them until there is no more Fitna (disbelief and worshipping of others along with Allah)” (al-Baqarah 2:193)

“(The hypocrites) will call the believers: “Were we not with you?” The believers will reply: “Yes! But you led yourselves into temptations (Fatantum Anfusakum), you looked forward to our destruction; you doubted (in Faith) and you were deceived by false desires” (Al-Hadeed 57:14)

Abu al-Tufayl reported: It was said to Hudhayfah, may Allah be pleased with him, “Who are the dead among the living?” Hudhayfah said, “Those who do not recognize good in their hearts and do not reject evil in their hearts.” - Muṣannaf Ibn Abī Shaybah 37577

Abdullah ibn Amr reported: Prophet Muhammad (SAW)said:...This nation of yours has been granted well-being in its beginning, but the latter generations will be afflicted with trials and affairs you will recognize as evil. Tribulations will come one after another, and tribulation will come in which the believer says: This will destroy me! Then it will pass and another tribulation will come in which the believer says: This one, this one! Thus, whoever would love to be delivered from Hellfire and admitted into Paradise, let him meet his end with faith in Allah and the Last Day, and let him treat people as he would love to be treated. Whoever pledges allegiance to a leader should give him the contract of his hand and sincerity of his heart, so let him obey as much as he can. If another leads come to start a rebellion, strike the neck of the other.” - Ṣaḥīḥ Muslim 1844

Thawban reported: Prophet Muhammad (SAW) said, “Soon the nations will be summoned to you just like one is invited to a feast.” It was said, “Will we be few in that day?” The Prophet said, “No, rather, you will be many in that day, but you will be scum like such flowing down a torrent. Allah will remove your esteem from the chests of your enemies and Allah will insert feebleness in your hearts.” It was said, “O Messenger of Allah, what is this feebleness?” The Prophet said, “Love for the worldly life and hatred of death.” - Sunan Abī Dāwūd 4297

Anas ibn Malik reported: Prophet Muhammad (SAW) said, “If Allah puts the Muslim servant to trial in his body, Allah says: Record his righteous deeds for him that he used to do. If he is healed, he will wash and cleanse himself. If his soul is taken, he will be forgiven and shown mercy.” - Musnad Ahmad 12503

Abdullah ibn Amr reported: We were gathered around the Messenger of Allah, Pbuh, while he mentioned tribulations, saying, “If you see that people have disordered their commitments, diminished their trusts, and are as jumbled as this,” and he interlaced his fingers. I stood to come near him and I said, “How should I act if that happens?” The Prophet said, “Stay in your house, control your tongue, accept what you know is good, reject what you know is evil, take care of your affairs specifically and abandon the affairs of the common people.” - Sunan Abī Dawud 4343

As Doomsday approaches, Fitna will increase. It will resemble the increase in darkness as night begins. Many who leave their homes in the morning as Muslims will return home as disbelievers in the evening. While they are Muslims in the evening, they will lose their faith during the night. During such times, staying at home is better than being involved in Fitna. Those who stay aloof are better than those who attack and lead in front. On that day, break your arrows! Leave your weapons! Address everybody with a smiling face and sweet words!”  (Abu Dawood) 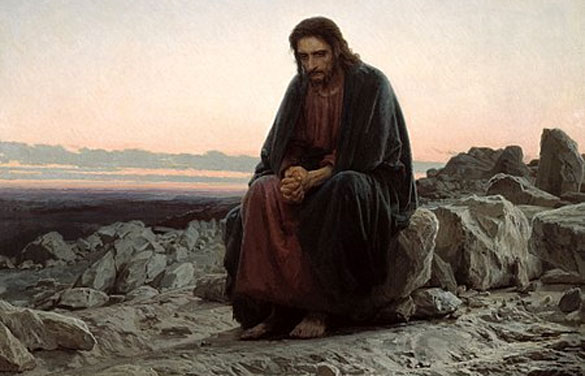 (Temptation of Christ/ From Wikipedia, the free encyclopaedia) Christ in the Wilderness by Ivan Kramskoy, 1872

Fitna as described by Ibn al-Arabi, the great mystic and philosophic scholar of Islam:

The anti-Muslim Dutch politician, parliamentary leader of his party, Party for Freedom, in the House of Representatives, has rightly named his 2008 short film, ‘Fitna’ as it is to highlight the war verses of the Holy Quran for creating rift among communities.