The Prevailing Social Ills Of The Pre-Islamic Era Were The Reason That Prophet Muhammad (SAW) Called It A ‘Daur E Jahiliya’, The ‘Time Of Ignorance’

1.    Islam called the pre-Islamic era an age of Jahiliya (ignorance) because of the religious, social and political ills widespread in the society.

2.    Islam transformed the people of savage Arabia into a people of peace.

3.    Scholars of every hue study this century for various reasons of their own.

4.    The revelation of the Holy Quran is the most auspicious event in the history of the 7th century. 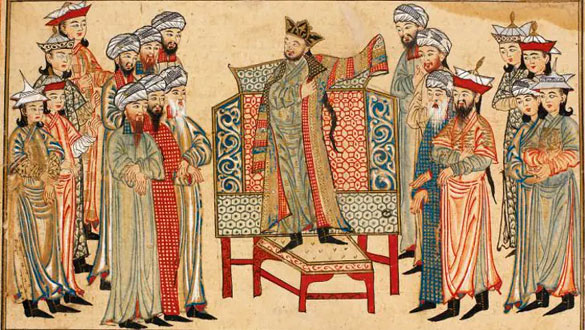 Photo courtesy/ The Conversation: The wealthy Quraysh tribe of ancient Arabia dominated the region for centuries. Qantara, CC BY

The seventh century is the most talked-about century from the beginning till date. Scholars of every hue study this century for various reasons of their own. The religious, social and political information of this century seems to be more important for the world because of the advent of Islam, the religion of peace, harmony, justice and social reforms. People must be interested in knowing how Islam transformed the people of savage Arabia into a people of peace. Islam called this century age of Jahiliya (ignorance) because of the religious, social and political ills widespread in the society.

Evils of injustices, malpractices and inhuman acts were embedded in the social fabric of the seventh-century Arabian peninsula. Socially ingrained injustices in the psyche of seventh-century Arabia gave birth to barbarity towards the downtrodden, weak and the women. The most inhuman ritual and system of the Arab society of the 7th century was to bury the female child as they took birth. Attraction towards the seventh century is obvious in the background of the above mentioned.

Stealing and killing the members of other tribes was a common practice during the age of ignorance. The people did not see anything wrong with it. People used to be constantly engaged in wars between the tribes. This warfare brought the weak, the poor, the old, the women and the children in a mental state of fear and chaos. There was no peace and development even for the namesake. Before the birth of ‘Rahmat ul Lil Alameen’, Prophet Muhammad (SAW) the area used to constantly witness drought and famine. This had brought the life of the people to the knees, asking for alleviation from poverty and a life of peace from the earthly gods they worshipped. In this deplorable era of the seventh century came the good news of the birth of Prophet Muhammad (SAW), as a mercy for the world.

The Seventh century is remembered and studied with wide-eyed expression because the social and moral condition prevailing during that period was more than hellish. People cried and begged for help in front of the wealthy and barbaric tribal warlords who never respected human lives. People of seventh-century Arabia, before the advent of Islam, had no law of the land but the words of the rich and the wealthy tribal warlords.

Prophet Muhammad (SAW)’ birth around the year 570 AD proved to be a turning point in the life of the Arab peninsula in the beginning and the people of the planet earth in general. It was the age of ignorance for the Arabs and the Apostle of Allah was sent as ‘Rahmat ul Lil Alameen’ to end the age of Jahiliya in the light of the commands of Allah, the Most Gracious.

The prevailing social ills of the pre-Islamic era were the reason that Prophet Muhammad (SAW) called it a ‘Daur e Jahiliya’, the ‘Time of Ignorance’.

The seventh century is curiously remembered and continuously mentioned also because the Last of the Prophets (خاتم النبيين) Prophet Muhammad (SAW) was born during this period for whom Allah, the Most Gracious says:

"Muhammad is not the father of any of your men, but (he is) the Messenger of Allah, and the Seal of the Prophets: and Allah has full knowledge of all things." (Qur'an 33:40) - Yusuf Ali

And indeed, you are of a great moral character. (Surah Al-Qalam - 4) — Saheeh International

And We have not sent you, [O Muhammad], except as a mercy to the worlds. (Surah Al-Anbiyaa: 107) — Saheeh International

‘Mercy to the Worlds’, the ‘Man of a Great Moral Character’ and many such titles are used in the Holy Quran to describe Prophet Muhammad (SAW) and truly so because no one with fewer adjectives ingrained in his humane traits would have been successful during that dire situation of the Seventh century.

Hoards of wealth were confined to few class-conscious members of Muhammad (SAW)’s tribe, the Quraish. The rest of the weaker and marginalised members of the Quraish tribe were living a life of misery. The Quraish tribe unconsciously felt the birth of a noble soul as Allah’ mercies transformed the deserted area into greeneries. Fields were full of crops, trees were laden with fruits and sheep and camel were always ready to be milked.

Unification of Tribes and Islamic Conquests

Prophet Muhammad (SAW) started preaching to the people of Mecca about the ‘Oneness of Allah’ in about 570 AD. He was not much successful in his endeavour in Mecca during that time. Unification of the tribes especially after the signing of Charter of Medina (Arabic: صحيفة المدينة‎) in AD 622 proved to be the beginning of the advent of Islam on the world stage.

The 7th century is also much sought after because of various Islamic conquests such as the downfall of the Sasanian Empire, known as the conquest of Persia, Syria, Palestine, Armenia, Egypt and North Africa. 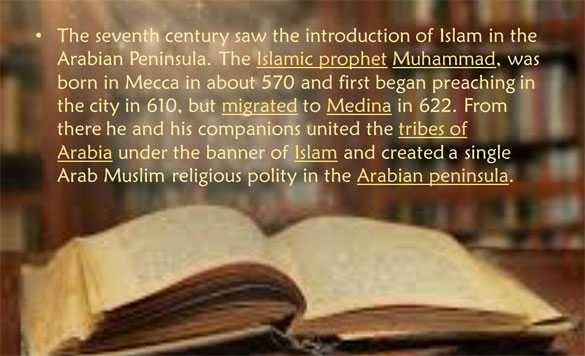 The Revelation Of The Holy Quran

The commands of Allah, the Most Gracious and Compassionate in the forms of revelation were later compiled in the form of a book, that is the Holy Quran, by Zayd ibn Thabit and other scholars of the time under the guidance of Abu Bakr Siddiq (RA), the first Caliph.

The Lesson Of Equality In Islam Makes Seventh Century Remarkable

Islam gained its ground with its roots well spread and strong during the lifetime of Prophet Muhammad (SAW) itself. His Last Sermon on the occasion of his last Haj is reckoned to be the most authentic lesson of equality in the history of humanity and the ethical and religious ideals of Islam. People listening to him stood in silence and learnt how Islamic ethos has to be maintained even after Rahmat ul Lil Alameen leaves for his heavenly abode. Let us consider and follow the lesson left for mankind in the Last Sermon of Prophet Muhammad (SAW), in letter and spirit.

There are enough reasons for the people to be in hunt of Seventh century. It attracts people around the world for it has the proud legacy of the birth of Prophet Muhammad (SAW) and the advent and spread of Islam.