Islam and Health: Al-Quran – A Recipe for Earthly Diseases

Allah, the Ash-Shafi’i, Ingrained the Power of Cure in the Leaves and Roots of Flowers, Plants and Various Other Kinds of Vegetation

2.    Health is the axis of a life that is lived with the signs of life.

3.    It is said that a healthy mind lives only in a healthy body.

4.    Allah the Creator of the universe has created a cure for every disease that affect human and animal life.

People say, 'health is wealth'. No matter how highly educated, intelligent, wise and wealthy a person is, it is all rubbish if one is not able to use them for his, his family’s or for his society’s benefit. Health is the axis of a life that is lived with the signs of life. It is said that a healthy mind lives only in a healthy body. If a person is not physically fit he is not mentally fit as well. Both to study and to teach a person is required to have a mind that is free of every kind of tension because it is said that ability lessens if it is surrounded by adverse thoughts (चिंता से चतुराई घटे).  One cannot be expressive, receptive and imaginative in a state of a weak mind due to ill health. 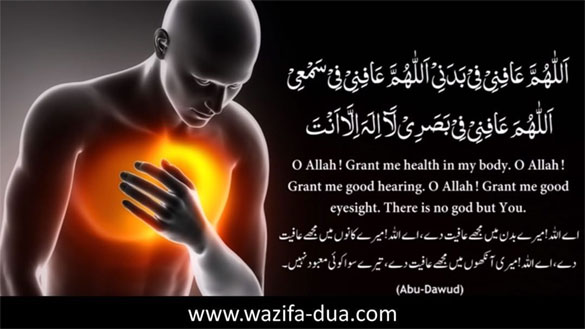 Islam being a religion of the masses has systematically described that which could affect human and animal life in here. Allah the Creator of the universe has created a cure for every disease that affect human and animal life. Allah the Ash-Shafi’i created a cure before the diseases. Various researches on the plants and other kinds of vegetation have brought to the notice of the human mind that cure of various kinds of diseases is ingrained in them.

Allah the Ash-Shafi’i ingrained the power of cure in the leaves and roots of flowers, plants and various other kinds of vegetation. It is not that the diseases and the viruses that we are in shocking awe of were not there during the early days of the creation of the world.

The viruses and the diseases that we the people of this age are witnessing were there during the early centuries also and that these will appear again during the later ages with different names and in different forms. Allah the Ash-Shafa’i (protector of our lives) knows the things to come hence He arranged the medicines before He created the diseases. Allah the Exalted in Might, the Wise created such flowers and plants and vegetation and other environmentally ingrained articles that had the power to cure human beings with His command.

Allah the Ash-Shafi’i granted His blessings to the selected few who understood His commands and researched on His created ailments and reproduced them into easily available cures, the medicines. The world has faced many pandemics and epidemics and has defeated them with the Grace of God the Almighty.

Scientists call the Covid-19 virus with different names and also say that its new variants are also surfacing around the world. Today’s newspapers say, quoting the scientists that this virus may ultimately remain like a flu virus affecting young kids. This, therefore, cannot be overruled that during the coming centuries the concerned generations may have to face this virus in another form. There may be another devastation, God forbid, and there will be another medical research for another medicine. But, the cure available in the naturopathy created by God will remain the same. We, the people need to understand Allah’s signs of the coming diseases and the Prophetic traditions to be prepared to face the medical challenges. For the epidemics like Covid-19, prophetic traditions have asked the people to quarantine and take medication available in natural resources. As per the following tradition, Prophet Muhammad Pbuh said:

“When you hear that [a plague] is in a land, do not go to it and if it occurs in a land that you are already in, then do not leave it, fleeing from it,”  - Prophet Muhammad (SAW)

Following Quranic Ayat and Prophetic traditions that need to be understood and followed:

Quranic Verses on Cure of Diseases

“And We send down from the verses of the Quran something that can be Shifa (cure) and a mercy to those who believe and the Quran did not increase loss than those who do wrong.” (Surah Al-Isra - 82)

“O mankind indeed has come to you from your Lord and a healing for the diseases (that are) in the chest and guidance and mercy for people who believe.” (Surah Yunus: 57)

“Say, Al-Quran is a guide and antidote for those who believe.” (Surah Fussilat: 44)

And when I am ill, it is He who cures me (Ash-Shu'ara: 80) - Sahih International

“Verily, there has come to you from your Lord and a healing for the diseases (that are) in the chest and guidance and mercy for people who believe.” (Surah Yunus: 57)

Abud Darda (RA) narrates: "The Messenger of Allah (pbuh) said, ‘Allah has sent down both the disease and the cure, and He has appointed a cure for every disease, so treat yourselves medically, but use nothing unlawful." (Abu Dawud, Tibb 11, (3874))

Abu Huraira narrates: Prophet Muhammad (pbuh) states, "O people! Be treated! There is no disease that Allah has created, except that He also has created its treatment. Then, seek treatment." (Bukhari)

Hz. Jabir narrates: "Prophet Muhammad (pbuh) said, "There is a cure for every disease. If the cure for a disease is met, the person will be saved from that disease with the permission of Allah."

Narrated Abu Huraira: I heard Allah's Apostle saying, "There is healing in black cumin for all diseases except death." (Volume 7, Book 71, Number 592)

Narrated 'Ursa: Aisha used to recommend At-Talbina for the sick and such a person as grieved over a dead person. She used to say, "I heard Allah's Apostle saying, 'At-Talbina gives rest to the heart of the patient and makes it active and relieves some of his sorrow and grief.' “(Volume 7, Book 71, Number 593)

As the end of the world will come near as more devastating natural disasters and environmental sufferings will surface and human beings will face unlimited difficulties in fighting to save human lives. All that is to be, is to be but the sufferings for the human being is the creation of the human beings themselves. Somehow, it has almost forgotten as to why it has been sent onto the earth and as to what are the positive essence of life ingrained in him by birth. To fight all these man-made pandemics, epidemics and other natural calamities that bring various kinds of diseases, humankind will have to go back to the basics of the religious teachings of God and His apostles as well as the exegeses of the Holy Books of all the religions to understand what part of his life is missing.