Beauties of Islam - Defaced by the Terrorists and Militants

1.    Islam cannot be a religion of terrorists and militants or hypocrites.

2.    Allah created man embedded in the beauty of wisdom, intellect, love, compassion, inclusivity and the power to think and take decisions.

3.    It is the beauty of Islam that it continued to send prophets to every region and community and continued the process untill it was completed with Prophet Muhammad's Deen. (Peace be upon him)

4.    Allah sent His messengers in a quest to make men understand and accept His Oneness (توحید) and His signs so that they may understand. 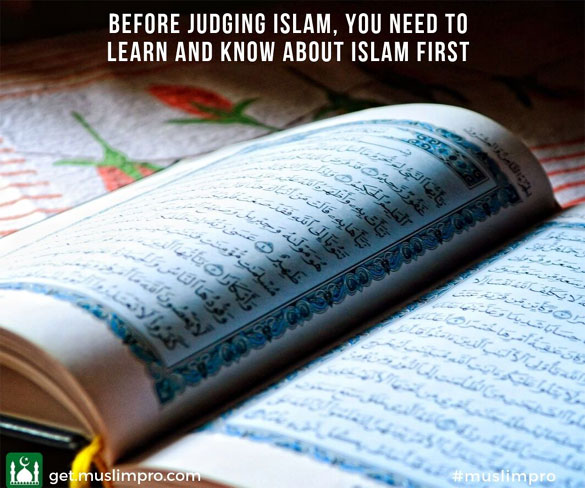 Islam means ’peace. Peace is a beautiful word. Peace is embedded with all that is beautiful. Islam is a religion that advocates religious peace and inclusivity on the earth. The religion that says: ‘…whoever slays a soul, it is as though he slew all men; and whoever keeps it alive, it is as though he kept alive all men  - (Al-Ma’idah: 32)’ cannot be a religion of terrorists and militants or hypocrites.

Human beings are the most peaceful and the most beautiful creature of this universe. In all that the Almighty Allah created, He created human beings the best. Allah created them embedded in the beauty of wisdom, intellect, love, compassion, inclusivity and the power to think and take decisions based on their parameters. It is the beauty of Islam that it sent prophets from among us to guide the rest of us on the righteous path. It is the beauty of Islam that it continued to send prophets to every region and community and kept the process continued till it was completed with Prophet Muhammad Pbuh's Deen.

The human being takes birth will innocence and purity of heart and beauty of wisdom. Can anyone imagine anything more peaceful and beautiful than a newly born baby? We have to notice the innocent smiles and beauty of their thoughts to understand the beauty of the Creator’s trait with which we all are born.

Allah the Most Gracious and the Most Benevolent is in the peaceful beauty of the children looking at the wonders of the world, silently praising the Almighty Creator for His gift of peace and tranquillity and beauty bestowed upon the human being.

Looking at the world we witness beauty in everything that we see. The beautiful blue sky is embedded with beautiful twinkling stars and a big bright moon sprinkling parts of the world with milky white light having the power of spiritual enlightenment. Moonlit nights fill the hearts of the poets, Sufis and Saints with the essence of heavenly beauty. Looking around the world as far as we could we find peace, be it the fields, the mountains, the fountains or the birds and animals. Allah the Most Compassionate created the universe with the traits of peace, love and compassion. He arranged the days and nights, the nature and environment and all the living beings in a manner that are made for each other if the human being maintains peace and tranquillity among all the creations of Allah. The human being must maintain peace as He has bestowed upon them all that is humane and beautiful. Allah says in the Holy Quran:

“He Who has made everything which He has created most good (beautiful: al-Husn): He began the creation of man with (nothing more than) clay” - (As-Sajdah: 7)

It is one of the beauties of Islam that Allah the Almighty never forced religion on His creation and said in the Holy Quran, ‘For you is your religion, and for me is my religion.’ And contrary to this to make people understand the righteous path He sent more or less 1, 2400 prophets as His messengers in a quest to make men understand and accept His Oneness (توحید) and His signs so that they may understand.

In matters of faith, He has laid down for you [people] the same commandment that He gave Noah, which We have revealed to you [Muhammad] and which We enjoined on Abraham and Moses and Jesus: 'Uphold the faith and do not divide into factions within it'-... — Quran: 13

Allah the Most Compassionate asks the human beings: ‘Could the reward of Beneficence be anything other than beneficence?’ - (Ar-Rahman: 60)

Indeed We already created man in the fairest stature; - (At-Tin - 4)

Muslims Who Betrayed Their Religion

We all human beings are born embedded with the virtues of everything good created by Allah.

Somehow, some among us harnessed the evil of supremacism and sectarianism and have defaced the values of our spiritual essence. The ugliness that has crept into our thoughts and behaviour is needed to be defeated to recreate the peace and beauty of Islam.

Somewhere in between, we, the human being lost our spiritual essence and fell prey to the devilish designs of the devil (Shaitan).

We the human being are born alike. No one among us is good or bad by birth. Allah has created us and Allah has created the evils (Shaitan) as well so that we use our wisdom and keep ourselves safe from their evil designs. But the evil forces defeat the inborn virtues of some among us and govern their ego that ultimately instigate others to tread the wrong path. Allah, the Most High says in the Holy Quran:

Let there be no alteration in the creation of God. That is the upright religion; however, most people realize it not” (Ar-Rum: 30)

As the above mentioned Ayat says, ‘most people realize it not’, we are surrounded by such people who are not realising their mistake and are unknowingly killing their brethren, injecting brutalities on women and children and are unjustly making the Muslims their slaves.

Consider the following beautiful verse of the Holy Quran that makes it clear that there is no compulsion in religion hence any struggle in the name of establishing the rule of Islam is unfound and against the essence of Islam.

“Let there be no compulsion in religion: Truth stands out clear from Error: whoever rejects evil and believes in God hath grasped the most trustworthy handhold that never breaks. And God heareth and knoweth all things.” [Al-Qur’an 2:256]

Door to Forgiveness Are Open

It is the beauty of Islam that He never closes the door to ‘forgiveness’ rather has continuously revealed verses in all His Books mentioning how Allah forgives the seekers of forgiveness. All those who have in the name of establishing Islamic State have betrayed with their religion and their brethren need not be depressed as ‘depression is a form of Kufr’, as the doors to forgiveness are open. Consider the following Ayat and Ahadees on forgiveness.

And O ye Believers! Turn ye all together towards God, that ye may attain Bliss. — (Al-Noor: 31)

O ye who believe! Turn to God with sincere repentance, in the hope that your Lord will remove from you your ills and admit you to Gardens beneath which Rivers flow ... — (Al-Tahrim: 66)

Allah's Apostle said, "Every son of Adam sins, the best of the sinners are those who repent." — Sunan al-Tirmidhi, Hadith no. 2499

Famous historian De Lacy O’Leary wrote about Islam being a religion of peace and beauty in the following words:

“History makes it clear, however, that the legend of fanatical Muslims, sweeping through the world and forcing Islam at the point of the sword upon conquered races is one of the most fantastically absurd myths that historians have ever repeated.”

Those among us who keep themselves engaged in Zikr (remembrances) keep safe and those who fall prey to worldly attractions get misguided. Remember, ‘Let there be no compulsion in religion’ and maintain the sanctity of Islam, the religion of peace and beauty. The essence of Islamic beauty has to be preserved to maintain peace and tranquillity in the world.