1.    The right to education is accepted as an international legal instrument of human rights in the Universal Declaration of 1948.

2.    Education as a human right was declared from the very first word ‘Proclaim! (or read!) in the Holy Quran revealed by Allah, the Most Merciful.

3.    The human being is indebted to the people of knowledge.

4.    The oldest references to the concept of guru are found in the earliest Vedic texts of Hinduism.

The Universal Declaration of Human Rights, adopted in 1948, is the first international legal instrument that recognises education as a human right. Article 26 states: 'Everyone has the right to education. It is a non-legally binding instrument but with a great political and moral force. Since its adoption, the right to education has been reaffirmed in numerous human rights treaties and declarations adopted by the United Nations.  https://www.right-to-education.org/

It is in 1948 that the right to education is accepted as an international legal instrument of human rights but it was centuries ago when the Holy Quran was revealed to the Last Prophet of Islam, Prophet Muhammad (SAW) that education as a human right was declared from the very first word ‘Iqra' or 'Read,' (Quran, 96:1) of the Holy Book.

The human being is indebted to the people of knowledge because of whom the world is introduced to nature and its gifts, science and technology that has brought ease and luxury to life and medicine which cures us from the minor to the most dreadful of diseases.

It is education that glorifies humanity and justice and is a reason for our peaceful existence like a big family inclusive of various kinds of languages, customs and creed from around the world. It is education that advocates unity in diversity and teaches the human being to respect and acknowledges the message of peace from all the religions of the world.

Quran, Ahadees and the Education

Allah, the All-knower says in the Holy Quran that the people of knowledge and those who are illiterate are not the same in the rank bestowed to human being by the Creator. The Holy Quran says:

….Say, “Can those who know and those who do not know become equal?” It is only the people of understanding who are receptive of the advice.  (Surah Az-Zumar-9) — Mufti Taqi Usmani

The human being is the best of the creation of Allah because of the knowledge that gives him the power of distinguishing the fair from the unfair and thus establishing justice in the world. People with knowledge are selected for the guidance of fellow humankind and on the Day of Judgement, the educated people will arise with high rank among the Ummah. Consider the following Ayaat:

And when you are told, "Arise, "then arise; Allah will raise those who have believed among you and those who were given knowledge, by degrees. And Allah is Aware of what you do. (Surah Al-Mujadila - 11) — Saheeh International

You are the best ‘Ummah ever raised for mankind. You bid the Fair and forbid the Unfair, …. (Surah Ali 'Imran - 110) — Mufti Taqi Usmani

"O Muslims! you are the best of peoples, who have been selected for the guidance of mankind; you enjoin them to do good deeds, and prevent them from forbidden things; and you have firm faith in Allah." (Quran 3:110)

Allah, the All-knower bestows high ranks to the knowledgeable people because He says that it is they who will understand the divinely signs and will spread His message among the mankind for their good is hidden in understanding His message that shields them from the dangers of the evil powers and saves them from the natural disasters. Allah, the Most Merciful says in the Holy Quran:

And these examples We present to the people, but none will understand them except those of knowledge. (Surah Al-'Ankabut - 43 )— Saheeh International

Along with the Holy Quran, numerous Ahadees exemplify the role of knowledge and the importance of its acquisition no matter how many hardships one has to face for it for there are great rewards for it in the life hereafter. Consider the following Ahadees in this regard:

In a famous Hadees Abu Dardaa said that the Messenger of Allah (SAW) said:

“Those people endowed with knowledge are the inheritors of the prophets.” (Hadith Hassan, Abu Dawood, ibn Majah, At-Tirmidhi, ibn Habaan].

“If anyone acquires knowledge that should be sought for the sake of Allah, but instead he acquires it merely to get some worldly advantage, he will not experience the fragrance of Paradise.” (Sunan Abu Daoud)

Abu Huraira reported the Messenger of Allah, peace and blessings be upon him, said,

“When the human being dies, his deeds end except for three: ongoing charity, beneficial knowledge, or a righteous child who prays for him.”(Sahih Muslim 1631)

Distribution of Knowledge: First Responsibility of the Educated People

The beauty and purpose of knowledge are to teach and mentor other fellow beings. Acquiring knowledge is not the end of the responsibility of the human being rather it is the beginning of a more important responsibility towards the creation of Allah and that is to teach them.

We find that a teacher in almost every religion and spiritual school is given a respectable rank. All the religions acknowledge the role of a teacher and the importance of being learned. 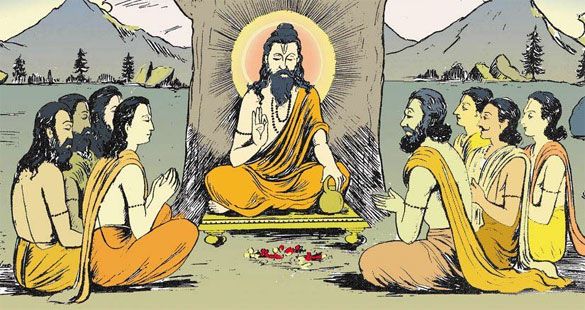 The oldest references to the concept of guru are found in the earliest Vedic texts of Hinduism. The guru, and Gurukula – a school run by guru, were an established tradition in India by the 1st millennium BCE, and these helped compose and transmit the various Vedas, the Upanishads, texts of various schools of Hindu philosophy, and post-Vedic Shastras ranging from spiritual knowledge to various arts By about mid 1st millennium CE, archaeological and epigraphical evidence suggest numerous larger institutions of gurus existed in India, some near Hindu temples, where Guru-Shishya tradition helped preserve, create and transmit various fields of knowledge. These gurus led broad ranges of studies including Hindu scriptures, Buddhist texts, grammar, philosophy, martial arts, music and painting.

The tradition of the guru is also found in Jainism, referring to a spiritual preceptor, a role typically served by a Jain ascetic.

In Sikhism, the guru tradition has played a key role since its founding in the 15th century, its founder is referred to as Guru Nanak, and its scripture as Guru Granth Sahib.

The guru concept has thrived in Vajrayāna Buddhism, where the tantric guru is considered a figure to worship and whose instructions should never be violated.

(Guru From Wikipedia, the free encyclopaedia)

Sant Kabir Das Ji, in one of his famous Dohas, attributes a teacher higher rank than that of a god. According to him had there not been a teacher, people would not have understood the value of a god hence, if both, a god and teacher, stand together you have to touch the feet of your teacher before touching the feet of your god.

The Holy Quran says that people with knowledge should be given the responsibility of teaching other people as this is more important than going to the front. The Holy Quran also says in the following Ayat that people of knowledge should command their fellow human being to warn them to be cautious of the fault and misdeeds they might commit. Consider the following Ayat:

And it is not for the believers to go forth [to battle] all at once. For there should separate from every division of them a group [remaining] to obtain understanding in the religion and warn their people when they return to them that they might be cautious. (Surat At-Tawbah:122) - Sahih International

Islam emphasises the acquisition of knowledge through discussion hence the Holy Quran in the following Ayat commands the people who do not know to discuss and acquire knowledge from the people of knowledge.

So ask of those who know the Scripture [learned men of the Taurat (Torah) and the Injeel (Gospel)], if you know not. (Surah An-Nahl - 43) - Mohsin Khan

Various narrations describe the importance of being a teacher and the spread of knowledge. Prophet Muhammad (SAW) has all through his pious life asked his companions and the people to teach their fellow being to make them aware of their duties towards Allah, the Most Merciful and the people around them. The Prophet of Islam (SAW) has cautioned Ummah of the punishments they will have to bear if they concealed their education and hide from people, what they knew. Describing the importance of a teacher, Prophet Muhammad (SAW) says that God’s angels, the inmates of the heavens, the earth and even the ant and the fish salute to ‘a teacher who teaches good to the people. Consider various Ahadees on the importance of being a teacher and acquisition of knowledge:

“Verily Allah, His angels, the inmates of the heavens and the earth, even the ant in its hole and the fish in the sea send salutation on the one who teaches good to the people.” [Its chain is Hassan]

The Prophet (ﷺ) said, "The best among you (Muslims) are those who learn the Qur'an and teach it." (Sahih al-Bukhari 5027)

Whoever acquires knowledge and keep it concealed Allah will bridle him with a bridle of fire on the Day of Resurrection. [Abu Dawood, Ibn Majah, At-Tirmidhi]

Prophet Muhammad (SAW) says: “The superiority of a learned man over a worshipper is like my superiority over the ordinary men from among any companions.” [At-Tirmidhi. Hadith Hassan].

Abu Huraira reported: The Messenger of Allah, peace and blessings be upon him, said, “Whoever travels a path in search of knowledge, Allah will make easy for him a path to Paradise.” (Sahih Muslim 2699)

After going through the teachings of Allah, the Most Merciful, the Prophet Of Islam (SAW) various lessons from other religions of the world and the teachings of great men among us, it seems we have lost our way somewhere in the middle and have given importance to have with us whatever knowledge we have otherwise we, the human being would not have to face the consequences of greed, dishonesty and superiority complex that is bringing unbearable hardships on the world. It does seem that no education that gives the tiding of humanity and selfless service is left amidst us.  Either we have lost our strength of understanding Allah’s signs or we are concealing our knowledge and not letting others know the signs that can aware us of incoming natural disasters.

We, the human being must acknowledge our roles as parents and as per the narration of Ayyub Ibn Musa give our children good education that helps them be an educated fellow that understands its responsibilities towards his fellow human being and acts accordingly:

The Prophet Muhammad (صلى الله عليه وسلم) said: “A father gives his child nothing better than a good education.

There is a Hadees hadith compiled by Imam At-Tabarani that says:

“The best of people are those that benefit humanity.” (Al-Mu’jam Al-Awsat)

Let us be among the best of the people of our Creator and create an atmosphere of love, peace and brotherhood that brings smiles to our faces.