Contrasts between Sulh and Arbitration and Their Validity in Islam

1.    Arbitration and peaceful settlement (Sulh) have a long history in Arab and Islamic communities.

2.    In Islamic law, arbitration has received a lot of attention, resulting in a set of well-defined rules and methods.

3.    The validity of Sulh could be supported by the Quranic verses and hadiths that favour arbitration.

4.    Any party may deny arbitration as long as it has not begun, and the arbitrator may withdraw from the case at any time, even after agreeing once, as long as he has not begun issuing a verdict.

5.    Arbitration is legal in some financial and social matters, with the exception of Hudud, Li'aan (mutual cursing, a sort of divorce), and penalties. 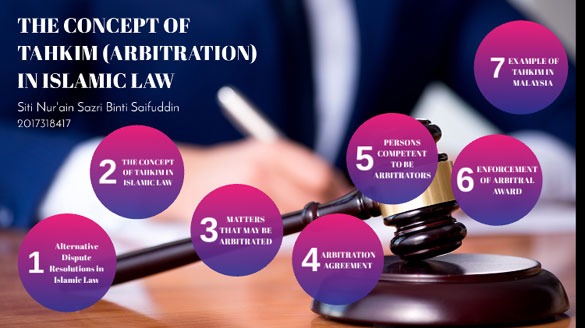 Arbitration and peaceful settlement (Sulh) have a long history in Arab and Islamic communities, and their origins may be traced back to pre-Islamic Arabia. In any kind of dispute resolution, Sulh is the desirable outcome and method. In order to make the judicial process easier, Islam has legitimised arbitration. In Islamic law, arbitration has received a lot of attention, resulting in a set of well-defined rules and methods. Arbitration has many advantages, including streamlined procedures, confidential hearings, and a legal basis, especially if those in charge are recognised for their skill, intelligence, independence, experience, honesty, and wisdom, as well as the capacity to apply its standards oversees.

The distinction between Sulh and arbitration is slight. The validity of Sulh could be supported by the Quranic verses and hadiths that favour arbitration. The Quran and Sunna have both sanctioned arbitration in the form of a third party chosen by the disputing parties to resolve their differences through conciliation or adjudication. The contrasts between the two are, however, acknowledged. In Islam, arbitration differs from Sulh in three ways: first, Sulh allows for an amicable settlement between the parties with or without the assistance of others, but arbitration requires the appointment of a third party. The disagreeing parties in Sulh, on the other hand, have the option of using an arbitrator to reach an agreement. As a result, arbitration can be used as a Sulh tool. Second, a Sulh agreement is not enforceable unless it is made in front of a court, but arbitration, according to the majority of jurists, is enforceable without the intervention of a court. Third, Sulh can only be used if a conflict has already happened; it cannot be used to resolve a potential dispute, whereas arbitration can be used to resolve both existing and potential disputes. [Aseel Al-Ramahi, Sulh: A Crucial Part of Islamic Arbitration, London School of Economics and Political Science, Law Department, p.12]

The legality of arbitration is supported by the Holy Qur'an, Sunnah, and Ijma. Allah Almighty Says:

He Almighty also says, “But no, by your Lord, they will not [truly] believe until they make you, [O Muhammad], judge concerning that over which they dispute among themselves and then find within themselves no discomfort from what you have judged and submit in [full, willing] submission.” (4:65)

The first verse confirms that a problem between married couples must be settled through arbitration before a divorce can be granted. It explains why there must be two arbitrators (one from each side). In the second verse of the Quran, anybody who determines a matter and assigns blame to parties is obligated to do so in an honest and just manner. This verse gives judges the authority to reach legally binding decisions. Alternatively, these passages could be seen as necessitating Sulh between rival parties. In any event, the primary purpose of arbitration is to ensure that Muslim disputes are resolved in a peaceful and equitable manner.

The Messenger of Allah, peace be upon him, is reported to have said, “Whoever arbitrates between two consensual without fairness, Allah's wrath is on him.”

The beloved Prophet [peace be upon him] advised Muslims and non-Muslims to settle their disagreements through arbitration. One of the first non-Muslims to follow this counsel was the Bani Qarnata clan. The Prophet acted as an arbitrator as well as a party who agreed to the arbitrator’s decision. A clause in the Treaty of Medina, the first treaty made by the Muslim community, which enabled problems to be settled by arbitration and was signed in 622 A.D. between Muslims, non-Muslims, Arabs, and Jews, is another example of the Prophet's use of arbitration.

According to Sunni Islamic Jurisprudence, once an arbitrator makes a decision, it becomes binding on both parties in the same way as a contract or a court ruling. A contract, in accordance with Islamic Sharia, is divine in nature, and upholding one's agreements is a holy duty. Allah Almighty says:

“And fulfil the covenant of Allah when you have taken it, [O believers], and do not break oaths after their confirmation while you have made Allah, over you, a witness. Indeed, Allah knows what you do.” (16:91)

The validity of arbitration is further supported by the unanimous agreement [Ijma] of the Prophet's holy companions (peace be upon him).

Arbitration is given special attention in Arab and Muslim countries. They have made a particular chapter in the Civil and Commercial Procedures Code. Through Federal Law No. 6 of 2018, some countries, such as the United Arab Emirates, recognised arbitration as a separate system. The New York Convention of 1958 was signed and approved by the majority of Arab and Muslim countries. In its ninth session (April 1995), held in Abu Dhabi, United Arab Emirates, the International Islamic Fiqh Academy supported arbitration as a legitimate means of dispute resolution, deciding that arbitration is an agreement between the two parties to a specific dispute to appoint a third party to arbitrate between them and resolve their differences through a binding verdict based on Islamic Sharia. Arbitration in this sense is legal, whether between individuals or in the context of international conflicts.

It is important to emphasise that neither the disputing parties nor the arbitrator are obligated to conduct the arbitration. Any party may deny arbitration as long as it has not begun, and the arbitrator may withdraw from the case at any time, even after agreeing once, as long as he has not begun issuing a verdict. Because their consent is related to his own personality, he cannot designate someone else to function in his place without the approval of the two parties concerned.

Arbitration is legal in some financial and social matters, with the exception of Hudud, Li'aan (mutual cursing, a sort of divorce), and penalties.  Arbitration is likewise not permissible in instances that fall solely under the authority of the court. Any arbitration in a matter not susceptible to arbitration is null and void.