Malcolm X is associated with violent black nationalism. But his conversion to Sunni Islam helped bring him back into the mainstream of American life. His assassination 50 years ago robbed the civil rights movement of a powerful leader

When Malcolm X was assassinated, Time Magazine wrote that he had been “a pimp, a cocaine addict and a thief. He was an unashamed demagogue. His gospel was hatred.” The New York Times, America’s liberal bible, called him “an extraordinary and twisted man, turning many true gifts to evil purpose.”

That his killers were identified as members of the radical black Nation of Islam suggested a case of chickens coming home to roost. Large parts of white society breathed a sigh of relief. They thought they had been delivered from a gangster.

Fifty years on and Malcolm’s reputation is very different. With a better understanding of what Malcolm really thought and what he really stood for, he now stands out as a prophet of the civil rights era and the embodiment of black pride. 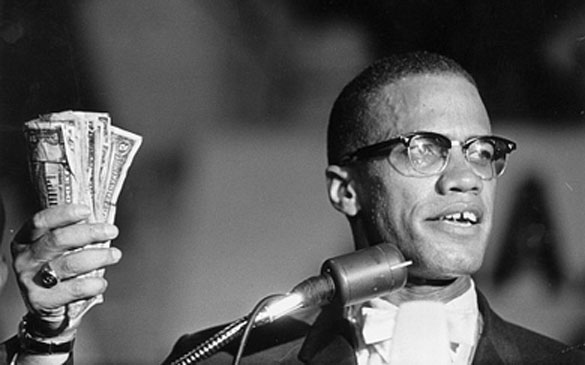 During a speech at the Urline Arena, Washington DC, in 1963 (Richard Saunders / Getty)

If Malcolm was angry, he had good cause. He was born in 1925 into a society wherein he felt that black people had no personhood: brought to America by theft, owned, freed with a fight, condemned to poverty and racism. The United States preferred its “good” black men to be victims, martyrs or Christian visionaries. But Malcolm grew up in a household where the words of black nationalist Marcus Garvey were gospel, and he wandered the streets of a New York where jazz gave African-Americans their own language and identity. He father was killed in mysterious circumstances, his mother went insane. A white teacher, he claimed, told him that his ambition to be a lawyer was “no realistic goal for an–––––.” So Malcolm became a career criminal – including a gay prostitute – before landing in jail in 1946. There he was picked up by the Nation of Islam. Malcolm Little became Malcolm X.

We might regard this dogma as contrary to traditional religious emphasis upon the common origin of man, but to someone with Malcolm’s history it contained a certain logic. First, it inverted a centuries old prejudice that blackness was inferior to whiteness – a notion ridiculed by the obvious injustice of American society. Second, if white, mainstream American culture would not let black people succeed on equal terms then any claim to America being racially equal was a nonsense and blacks would never obtain their rightful equality within it. So why bother trying? Better to separate from white and try to build communities that would stand on their own. The Nation urged African-Americans to quit the mainstream, live clean and disciplined lives, and to obtain dignity through self-reliance. Violence was acceptable only in self-defence.

As a high-profile preacher for the Nation, Malcolm was not just despised by conservatives. Liberals had little time for him, too. In the 1950s and early 1960s, the civil rights model was perceived to be that of whites and blacks working together as part of an alliance towards the securing of constitutional rights. The goal was to integrate black people into those parts of American life from which they had been hitherto excluded: democracy, public spaces, the professions etc. Malcolm’s suggestion that black and white are in natural competition and that black people should go it alone thus ran entirely counter to the liberal ethos. Malcolm poured scorn on Martin Luther King Jnr’s strategy of peaceful resistance: “The only revolution based on loving your enemy,” he said in 1963, “is the Negro revolution…That’s no revolution.”

So why, then, has Malcolm’s reputation among historians improved dramatically since his the years following his assassination? Partly, his biography became better understood. In 1963-64, Malcolm began to split with the Nation in an argument over personalities and tactics – and in the few months that he still had to live there was a revolution in his politics. Critical to this was Malcolm’s conversion from the Nation of Islam to mainstream Sunni Islam. He went on a pilgrimage to Mecca and was struck by the racial harmony among Muslims: “There were tens of thousands of pilgrims, from all over the world. They were of all colours, from blue-eyed blonds to black-skinned Africans. But we were all participating in the same ritual, displaying a spirit of unity and brotherhood that my experiences in America had led me to believe never could exist between the white and non-white.”

Nowadays, we’ve been trained by media portrayals to see Islam as politically radicalising and divisive. But it helped transform Malcolm from a black leader who preached separation into a proponent of the hope that African-Americans could advance as part of a broader coalition with oppressed people – something closer to a socialist. Now advocating democratic participation, he said, “It's time for us to submerge our differences and realize that it is best for us to first see that we have the same problem, a common problem — a problem that will make you catch hell whether you're a Baptist, or a Methodist, or a Muslim, or a nationalist.”

Had Malcolm lived beyond 1965 it’s fascinating to imagine how he might have informed the civil rights revolution to follow. Could he have put iron in the glove of Martin Luther King Jnr’s anti-poverty campaigns? How would he have reacted to growing violence and urban riots - could he had articulated their purpose better? Would he have made his peace with the system and endorsed Robert Kennedy for president in 1968? Malcolm’s evolving philosophy might have seen him eclipse King as the natural leader of the new phase of civil rights activism. For it was moving, necessarily, away from the liberal ideal of biracial campaigning and towards assertion of black pride. Blacks had defeated de jure segregation but now needed to fight de facto segregation. That struggle declined at points into an impotent rage that was all too easily dismissed by resurgent conservative forces as Marxist criminality. It would have benefited enormously from having Malcolm at the barricades with it, providing some moral clarity.

But it wasn’t to be. On February 21, 1965, Malcolm was preparing to address his Organization of Afro-American Unity in Manhattan's Audubon Ballroom when a struggle broke out in the crowd. A man rushed forward and shot him in the chest with a sawn off shotgun; two other men fired at him with semi-automatic handguns. He died from his wounds in hospital.

Inevitably, there are conspiracy stories surrounding the murder. He was certainly being followed by the FBI – director J Edgar Hoover told the FBI New York office to “Do something about Malcolm X.” Normally Malcolm’s rallies were given police protection, and we might have expected his Manhattan speech to have been crawling with cops given that his home had just recently been firebombed. Instead, there were no policemen posted outside the building and only two inside. And the investigation into the killing was botched: the crime scene wasn't preserved but cleaned up immediately to allow for a dance to take place that same afternoon.

Some say that the establishment benefited from the division within the civil rights ranks that resulted from the death, others point out that Malcolm’s murder robbed African-Americans of one its brightest and best leaders. That latter point is certainly true. Time was quite accurate when it described him as "a pimp, a cocaine addict and a thief". But his evolution in to the embodiment of black pride reminds us that the struggle for personal moral uplift has always been at the heart of the civil rights movement. It was a movement that didn’t just change laws but also transformed individuals – and the rebirth of Malcolm Little as Malcolm X personalised the struggle of millions of African-Americans.