Boots on the ground, drones in the skies, and government surveillance of electronic communications have become standard American tools for warding off extremist violence.

The Kingdom of Morocco has armed itself with a dramatically different weapon: using the soft power of religious women to quell violence before it happens. They call it “spiritual security.” 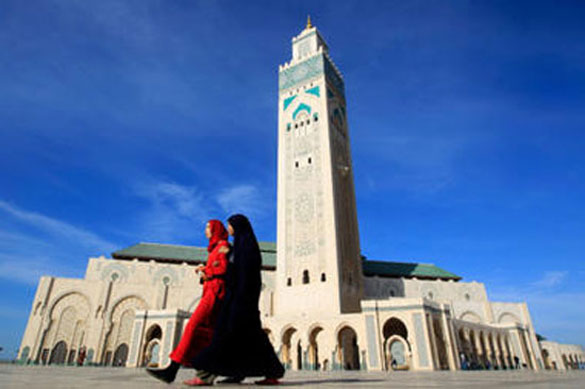 Two women walk past the Hassan II mosque in Casablanca, Morocco, in 2011. The minaret of the mosque is the highest in the world, standing at 689 feet. Moroccan women are studying to be religious leaders, the female equivalents of imams, who would reject religious extremism.

After 9/11 shook the world, Moroccan leaders began to think, “It could happen here,” and it did. In 2003, a dozen suicide bombers with ties to al-Qaida blew themselves up in Casablanca, Morocco’s economic center. Now the country knew firsthand the trauma of terrorism.

In response, Moroccan leaders came up with an idea dedicated to foiling religion-based violence by using religion itself. In 2006, under the leadership of the Moroccan Ministry of Islamic Affairs, the mourchidat program was born.

Sanae Elmarouani, 23, already holds a Master’s degree in Islamic studies. But she’s happy being back in class at Dar al Hadith al Hassania, studying in a prestigious program to prepare her for a vocation in religious service as a spiritual guide. Her school is a small, ornately decorated building in Morocco’s capital city of Rabat where men train to become imams, Islamic priests, and now –– since 2006 –– women prepare to become their female counterparts, mourchidat.

The setting for this unique school, its high ceilings intricately carved and tiled, is rich in Moroccan tradition. The goal of the program is similar. When asked how women with religion as their only weapon can possibly expect to beat back the forces of radicalism, Sanae is confident.

“Our religion in general forbids extremism. So the program is like a representation of Islam. The role of mourchidat is to unify the constants of the Moroccan nation.” She cites the guiding principles as honoring the King, who is commander of the faithful, and adherence to the Maliki doctrine and Ashaarit creed, approved by the Islamic Ministry and taught at her school.

The daughter of an imam, Sanae was a teacher in a mosque when she heard of the mourchidat program. She moved quickly to get her application in and felt lucky when she was accepted.

The program is meant to promote women’s rights, giving Moroccan women unprecedented opportunity and authority. Their work takes them to all parts of the community.

“We work in mosques,” Sanae says. “We work in prisons, hospitals, and we teach and lead women in all parts of their lives.”

She and her peers at Dar al Hadith were selected from a large applicant pool. The program is selective. In order to be admitted, women must hold university degrees and be able to recite sections of the Qur’an from memory. Students take a variety of courses, with the main focus on religious training.

But in the real world, helping people deal with anger, disappointment, and pain, their classes in communication and psychology will be useful. “I’ll use body language first,” Sanae says.

After graduating, Sanae will likely be placed in one of the many mosques that dot Morocco’s cities and countryside. She will use the Islam that she has learned at Dar al Hadith in all aspects of her work, teaching values of respect and tolerance, and diffusing extremist thought. She will lead circle discussions and answer questions about faith, but she will not be allowed to lead men in prayer.

In some ways, mourchidat can be compared to Catholic nuns. Both are religious women connected to organized groups. Both start from a place of personal spiritual commitment and apply their advanced studies to the needs of their faith communities.

But since they are women practicing in male-dominated cultures both have limits to their religious leadership. Religious orders of nuns are subject to church hierarchy, and Catholic women are denied access to the priesthood. Mourchidat –– although trained to perform the same duties as imams –– are not allowed to lead men in prayer.

Sanae Elmarouani is one of 50 women in her program. Another 150 participants are men studying to be imams in a parallel program. Mourchidat take an additional course that focuses on women’s issues like marriage and dress.

Using this broad portfolio, the mourchidat bring traditional Islamic values to their duties at the mosque. Program creators see their presence as a way of keeping radical forces at bay and providing “spiritual security.”

“[Spiritual security] simply refers to saving people from the different currents that may end up … throwing them into the hands of the people they’re not supposed to deal with,” says Khalid Saqi, assistant director of Dar Al Hadith Al Hassania.

The extremists Saqi speaks of, the ones that people are “not supposed to deal with,” are those whose unbending ideologies morph into social destruction and who bring others along with them. Before the 2003 suicide bombings, religious extremism wasn’t a prominent cause for concern in Morocco. But after Casablanca, the government began to take preventive action.

“We were dealing with a kind of people, a kind of ideology … that in some cases we were not even aware of, and then all of a sudden they surged out of nowhere and we were facing a phenomenon that had to be dealt with,” said Saqi.

Farah Cherif D'Ouezzan, founder and director of the Center for Cross Cultural Learning in Rabat, says that the program is effective in promoting the “spiritual security” Saqi speaks of and directing ideological power away from fundamentalist sects.

“I think it’s filling that gap that only Wahhabis and Salafis were filling — the gap that people needed someone to explain religion to them –– especially in a country with so much illiteracy and where religion is such an important part of culture. In the past you either had to follow the Wahhabis or Salafis or you were not Islamic,” said Cherif.

Both the Wahhabi and Salafi movements practice strict, uncompromising forms of Islam that have often brought them into conflict with Western values. While these strands of Islam are not always violent, the intolerance they practice can lead in that direction. The 2003 Casablanca suicide bombers were self-proclaimed Salafis linked to al-Qaida.

Another violent attack, this one in 2011 in Marrakech, “was not connected to any organized terrorist groups,” the US State Department’s 2012 Country Reports on Terror states, but the Moroccan Ministry of the Interior described the bomber as a Salafist and an admirer of al-Qa’eda.

In the official Islam of Morocco, the King is the commander of the faithful and moderation is the style of religious expression. The preferred religious code is the Maliki School of Jurisprudence that is also practiced in many nearby countries with positive relationships with Europe and the US. The Maliki School takes a traditional approach to Islam and is heavily based in the lives and actions of those who lived close to the Prophet Muhammad. The mourchidat are trained to use the official Maliki Islam.

While the mourchidat program is well liked, it does have critics. Skeptics of the counterterrorism aspects of the program point out that the 2011 bombing in Marrakech occurred well after this program had been established. Other critics are women’s rights proponents who claim that the mourchidat program hasn’t fulfilled its promise of improving the lot of women — that it doesn’t go far enough.

Asmae Lamrabet, one of Morocco’s leading female Islamic scholars, voices those concerns. She is the Director of the Center for Women’s Studies in Islam in Rabat, which is associated with the Rabita Mohammadia, Morocco’s main organization of Islamic scholars.

Lamrabet recognizes that the program has benefits, but has not yet seen real gains being made for women in Moroccan society. Islamic tradition holds that men and women are equal, she says. But where is the equality in Morocco today?

To make her point, Lamrabet cites a seventh-century Islamic scholar— Aisha, the Prophet Muhammad’s youngest wife –– one of the most respected Islamic scholars in the years following Muhammad’s death. Aisha was integral in spreading Islamic thought and unafraid to speak out. She publicly disagreed with misogynistic teachings of the powerful Calif Omar.

Her example endures to this day. Lamrabet says Aisha’s courageous voice is heard as a powerful call to Islamic feminists across the world.

Lamrabet calls the Islam that mourchidat are taught at Dar Al Hadith Al Hassania “very official, traditional, classical, and orthodox. There is no progressive ideal in this kind of speech.” To achieve its goal of expanding women’s rights, Lamrabet wants the program to encourage women to think independently rather than strictly follow government teachings.

“[The mourchidat] are going to transmit all the patriarchal messages –– the same message, the same traditionalist message. Yes, we have women in the mosque now, but it’s not a very big deal. We have to do more.”

While its achievements may not seem enough to Lamrabet and other critics, the program is popular. It provides a way for educated women to contribute to social change, for themselves and the communities they serve. Although only 50 women are admitted each year, applications have increased dramatically. In 2009, according to the US Embassy in Rabat, 800 women applied for the 50 seats.

Other Arab countries are getting interested as well. Moroccan mourchidat have traveled to the United Arab Emirates to help train Emirati mourchidat, and Saqi has heard reports that an Algerian mourchidat program is in the works.

Even as the model it provides is being replicated elsewhere, the effectiveness of the mourchidat program has not yet been documented. No research has been conducted to collect data on its real impact.

The US State Department, however, has bought into its anecdotal success, using supportive language in its 2009 Country Report on Terrorism. In that document, Morocco was commended for continuing “the pioneering experiment … of training and using women as spiritual guides.”

Sanae Elmarouani, looking at the upheaval in the world, particularly in nearby countries of the Middle East, understands the expectations that she and other mourchidat will carry on their shoulders. But she has faith, education, and the role model of her late father, the imam, to guide her. She is optimistic and self-assured.

“I adore my job because it has two gains: one for life and one for an afterlife with God,” she says.

• Samantha Harrington spent several months in Morocco on a SIT Study Abroad program and produced this story in association with Round Earth Media, a nonprofit organization that mentors the next generation of international journalists.

• This article originally appeared at Thomson Reuters Foundation, a source of news, information, and connections for action. It provides programs that trigger change, empower people, and offer concrete solutions.