Iranian women have long been in a cat-and-mouse game with the interpretation and enforcement of many aspects of Islamic law, but most especially the Hijab. Since 1983, when the first written law was passed, the Islamic Republic has made it officially mandatory for women to wear the headscarf and loose clothing, with punishment for failing to comply ranging from lashes to imprisonment. Even before the law was passed, just a few strands of hair outside the scarf would not be tolerated. Many women pushed that boundary during the tenure of reformist president Mohammad Khatami in the 1990s and early 2000s, partially showing hair and wearing Western-style clothing with the Hijab. 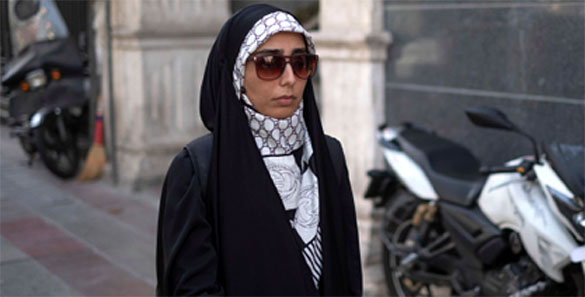 Today, while a large sector of Iranian women voluntarily wear the Hijab, women from all parts of Iran and all socioeconomic backgrounds are still defying Hijab restrictions, and the struggle between them and the authorities and conservative citizens continues. A string of  acid attacks on young women in the city of Isfahan last month raised questions as to whether the attacks were a response to the women wearing “bad Hijab”—the term for a woman who does not adhere to the most restricted style of the Hijab—and “un-Islamic” clothing.

Despite the threat of such violence or state-enforced punishment, Iranian women have recently been using social media to test boundaries. This past May, six young Iranians, three of them women without headscarves, posted a video of themselves dancing to Pharrell Williams’s global hit “Happy.” And a Facebook page called “My Stealthy Freedom,” featuring “selfies” of bareheaded women who have taken off the Hijab, has attracted hundreds of thousands of followers and “likes.”

Can Iran’s current political system allow women to choose or reject the Hijab freely and voluntarily? To date, the regime has had a harsh reaction to the idea of loosening strict enforcement of the Hijab. Many symbols of the early Islamic Republic have gradually disappeared. But can the Hijab be one of them? If not, what makes the Hijab such a powerful symbol to which the government clings?

The group dancing to “Happy” was arrested for “hurting public chastity,” in the words of Police Chief Hossein Sajedinia. Shortly thereafter, the six were shown on Iranian state television confessing. In September, they were sentenced to up to one year in prison and 91 lashes. Their sentences have been suspended for three years, meaning that the punishment won’t be imposed if there is no further offense during that time.

The regime has had less success prosecuting the women on Facebook’s “My Stealthy Freedom” page, which also appeared in May and has close to 700,000 likes. Facebook CEO Sheryl Sandberg has called it her favourite page on the site.

The images are incredibly varied—students, homemakers, young girls, professional women, and grandmothers—but all depict a bareheaded woman defying the order to wear a Hijab.

The page was started by journalist Masih Alinejad, who was forced to leave the country in the aftermath of the popular uprising following the controversial June 2009 re-election of former President Mahmoud Ahmadinejad.  She says the idea for the page began by “posting an old picture of myself sitting behind the wheel without [a] headscarf on Facebook and [captioning] it ‘stealthy freedom.’”

Masih asked her Facebook friends to post similar pictures, but she says it wasn’t a calculated campaign. In the beginning, friends posted images on her Facebook page, but eventually so many women and girls were sending in their pictures that she decided to start a new page devoted solely to the images, calling it “My Stealthy Freedom.”

Facebook lets her do what she cannot as a journalist, she says: Walk freely in the streets of Tehran, taking pictures and reporting on how women feel about wearing the Hijab.

Not surprisingly, hard-liners have branded her “anti-Islamic” and “anti-culture,” and have labelled the Facebook page “anti-religion.”

Little hope for change is on the horizon. On Oct. 8, the Iranian parliament passed a bill that gives the “morality police” a free hand. The new law, which promotes the principle of Amr bil Maruf va Nahy an Munkar—“commanding the right and forbidding the wrong”—says no person or institution has the right or authority to prevent the enforcement of “commanding the right.” In other words, the law expands the authority of the morality police to dictate to women how to dress. No matter how aggressively the police behave, they will not face prosecution, whereas those being targeted who respond with force will be punished. This law could also potentially be perceived as a green light by “pressure groups”—citizens with radical political and religious views who exert “pressure” on fellow citizens, including beating bad Hijab women—to exercise violence without fear of prosecution.

The Hijab is such a source of tension and disagreement in Iran that the rhetoric used in debate sometimes veers into the absurd. Gholamhossein Hadad-Adel, a former conservative presidential candidate and Member of Parliament, called the Hijab “a complicated issue like drug addiction.” The imam of Mashhad’s Friday prayers then said that a bad Hijab is “worse than drug addiction.”

In June, 195 members of parliament urged President Hassan Rouhani to take measures to promote the Hijab and warned that failing to implement Hijab law would have severe consequences.

Conservative political figures are not the only ones pressing for stricter Hijab laws. High-ranking religious leaders are as well, such as the Grand Ayatolla Naser Makarem Shirazi, who has called the lack of a “proper Hijab” a “threat to the society” and has urged parliament to pass “the right laws” to save society from a “dangerous path.”

Even President Rouhani, a moderate, must walk a fine line on the subject even as he speaks against stricter treatment of women. During a trip to Mashhad in September, Rouhani took two very different positions. In a gathering with a more conservative audience, he defended the Hijab, promising not to allow the legacy of the Pahlavi regime to reappear; this was a reference to Reza Shah Pahlavi, the father of the late Shah of Iran Mohammad Reza Pahlavi, who unveiled women by force in the 1930s. But among a different audience of elites, Rouhani asked, “is the way to promote chastity through vans? We have no other way?” The reference was to how the morality police round up bad Hijabs in vans and take them to local jails.

Fighting against patriarchal demands for stricter enforcement of the Hijab is an unofficial but steady women’s movement that is expanding its own demands. If in the past women’s rights and freedoms were defined as being able to vote or having access to free media, now, as Tehran-based sociologist and women’s rights activist Noushin Ahmadi Khorasani explains, “one of the most important pillars of democracy is the non-interference in the private spheres of the citizens.” Ahmadi suggests that a lack of democracy in a society like Iran is due to the fact that the integrity of the private sphere “has not been recognized.” The Hijab—what one chooses to wear—is firmly in that sphere.

The enforced wearing of the Hijab has been one of the most distinguishing characteristics of the Islamic Republic and as such is one of its weightiest issues. In part, the obsession with the headscarf has to do with countering what is seen as the corruption of the former Westernized regime. Powerful figures in both the government and the religious establishment also do not want Iran to currently open up to the West or Iranians to become Westernized, and they see the Hijab as a bulwark against such trends. For these leaders, the mandatory Hijab is critical to retain the country’s “internal order;” without it, they fear that they would completely lose control of women, who are already the majority of students in Iran’s universities; such a situation, in their view, would create “chaos.” While there are more moderate members of the regime, like Rouhani, who do not at base approve of the broad and extensive restriction of women, their voices are, as seen with Rouhani, contradictory or muted.

This does not mean that things cannot ease or lessen in severity. Since 1979, many unwritten rules, such as chess playing, singing by women, and the expectation for men to grow a beard, have faded or completely disappeared. Even some laws once considered sacred have changed. In 1998, the law barring women from attending trials or holding positions in the judiciary was rescinded.

So far, though, rules concerning the Hijab have remained in place, despite some shifts—both less and more restrictive—over time. Headscarf politics in Iran isn’t going anywhere soon.