Perhaps, the custodians of the Haji Ali Dargah were the first so-called Sufis in India who barred women's entry into the mausoleum.  Not long ago, women were freely accessing this Sufi shrine. Rather it was an age-old tradition in Mumbai. But it was only in 2011, for the first time, that the Haji Ali Trust banned women from entering the sanctum sanctorum of the Dargah in 2011, overturning an age-old tradition of women’s free visitation at the Mumbai shrine. They maintained that according to Islam, it was a “Gunah-e-Azeem” (grave sin) for women to draw close to the grave of a male Muslim saint. After this pronouncement, a growing number of women rights groups are demanding entry for females into the sanctum sanctorum of the historic Dargah, which attracts thousands of male and female devotees every day. A Muslim women's rights group is still fighting a legal battle with the Haji Ali trustees. Not only Muslim women activists but even those of the non-Muslim faith traditions have also taken out processions against this gender segregation. Like other Sufi shrines, Haji Ali too has traditionally been a multi-faith centre. 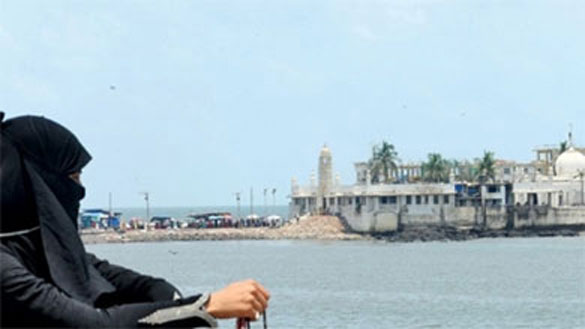 Of late, after her victorious campaigns against the age-old ban on entry of women in some Hindu temples like Shani Shingnapur and Trimbakeshwar temples in Maharashtra, a woman’s rights activist Trupti Desai has now brought her gender-justice movement to the Haji Ali Dargah too. She says that her movement is not aimed at offending religious sentiments, but is only opposed to the gender discrimination going on at the Haji Ali Dargah. But despite her peaceful protest, she was restricted from entering the sanctum of Dargah recently.

However, the Maharashtra government has favoured her demand stating that unless the Dargah trustees prove that ban is endorsed by their religious scriptures; women should be allowed to enter the sanctum sanctorum of Haji Ali. Indian Constitution has given equal rights to practitioners of all faiths. But the question is: Does the women’s visit to graves or shrines stand against the tenets of Islam? How come the religion which avowedly supports gender justice in its foundational scripture, the holy Qur’an, allows these shrine custodians to debar women from entering the sanctum of the Dargah? 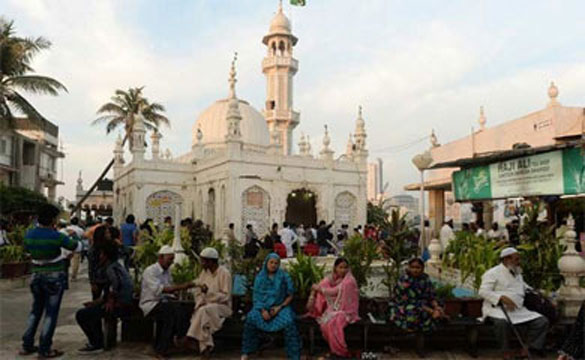 Women have been prevented entry to the mosque's mausoleum since 2011, with its trust saying close female proximity to the tomb of a revered saint is "a grievous sin" in Islam.

However, freshly minted zealot Muslims who abhor women visiting Sufi shrines, historic tombs, mausoleums and graves of the Prophet’s companions (Sahaba) and other great spiritual figures should rethink their position in the light of well-established Islamic traditions. Equating women’s visit to holy shrines with the pre-Islamic pagan practice of moaning and wailing at graves is untenable.

In fact, the abhorrence against the women’s shrine visitation basically stems from the writings and Fatwas of Salafist Muftis and clerics. But it is deplorable that the present-day self-styled Sufis too are speaking in the same language. Mufti Mehmood Akhtar Qadri, a Barelvi cleric, for instance, issued a fatwa declaring women not to be allowed into the sanctum sanctorum of the Haji Ali Dargah, which houses the tomb of the 15th century Sufi, saint Piya Haji Ali in Mumbai. In his interview with Ashutosh Shukla of DNA, Mufti Mehmood Akhtar Qadri stated:

“As a mufti, my job is to tell what the Shariah says. Everyone knew that women should not be allowed near graves …. The issue was dealt with during the reign of second Caliph, Umar. He had stopped women from going to the mosque due to their condition then. When a few aggrieved women complained to the Prophet’s wife Ayesha, she said even the Prophet would have taken the same stand. Now, the condition is 1,000 times worse”.

“I feel that women should not come to the Dargahs at all. But if we tell them this, God knows what will happen, considering their reaction when we said that they should not be allowed inside the sanctum sanctorum. Women should not stand close to those who are not related to them. As per the Shariah, there is Salamati (well-being) if women do not go to dargahs”.

It is not difficult to see that the above fatwa is quite identical to an earlier fatwa by a well-known Salafist cleric and Mufti (Islamic jurist) Shaykh Muhammad Saalih al-Munajjid. He writes in his fatwa titled, “Ruling on women visiting graves” (Principles of Fiqh, Jurisprudence and Islamic Rulings, fatwa no: 8198):

“The correct view is that it is not allowed for women to visit graves, because of the Hadith mentioned. It was narrated that the Prophet (peace and blessings of Allah be upon him) cursed women who visit graves. Women should stop visiting graves. The woman who visited a grave out of ignorance (of this ruling) is not to blame, but she should not do it again. If she does so, she has to repent and seek forgiveness”.

To further buttress his point, he gives a historical background of the related Hadith and its application today. He argues:

“At the beginning of Islam, visiting graves was not allowed for men and women alike, because the Muslims were new in Islam and came from a background where grave-worship and attachment to the dead were widespread. So they were forbidden to visit graves as a preventative measure, to avoid evil and prevent shirk. But once Islam was well-established and they understood Islam, Allah prescribed visiting the graves because of the lessons and reminders of death and the Hereafter, and so that they could make du’aa’ for the deceased and pray for mercy for them. Then Allah forbade woman to do that, according to the most correct of the two scholarly opinions, because they may present a temptation to men and even to themselves, and because they have little patience and they get too upset. So Allah forbade them to visit graves. This is also a form of kindness towards the men, because if they were all to gather at the grave, this might cause fitnah (sedition or temptation)”.

The reality is that Shaykh Muhammad Saalih al-Munajjid, in his above fatwa, has wrongly quoted the Prophetic saying (Hadith) and has not properly presented the complete background of it. The exact words of the Hadith in Arabic are as following:

English translation: “The Prophet of Allah, peace be upon him, said: "I forbade you to visit the graves but [now] do visit them” (Narrated as part of a longer Hadith: from Burayda by Muslim, al-Tirmidhi (Hasan Sahîh), Abu Dawud, al-Nasa'i, `Abd al-Razzaq (3:569), and others).

Going by the above Prophetic tradition (Hadith), both Muslim men and women were prohibited from visiting graves and shrines in the earliest period of Islam. According to Imam al-Tirmidhi who has also relayed this Hadith, the Prophet (pbuh) had forbidden the grave visitation or Ziyarat due to temporary reasons.  Men were prohibited because they used to recite inauspicious elegies and would write un-Islamic quotations over the graves of their dead relatives. They were influenced by the superstitious customs of the pre-Islamic era of ignorance, which is called Jahiliyah in Islamic history. Similarly, women were prohibited from visiting graves, as explained by Imam Tirmidhi, because in pre-Islamic times in Arabia, women would mourn and wail so much at the graves of their relatives that they would harm themselves by cutting their hairs and nails. But with the advent of Islam, Prophet Muhammad (pbuh) endeavoured to reform the superstitious tribal customs of the Arabian society. He broadened people’s minds and intellectual horizons, and so they could rise above their pre-conceived notions and superstitions, including with regard to visiting graves.

“I had prohibited you from visiting graves. But from now on, you can go for Ziyarat because it will make you feel unattached towards this world and remind you of the Hereafter.” (Hadith Hasan, narrated from Ibn `Abbas by al-Tirmidhi, Abu Dawud, al-Nasa'i in both in al-Sunan and al-Sunan al-Kubra, and others).

In fact, the Prophet (pbuh) himself would visit graves (Ziyarat-E- Qubur), especially on the Night of Mid-Sha`ban (Laylat al-Bara‘at). He used to visit the grave of his mother regularly and cry out of his love for, and remembrance of, her, as the following report says:

“The Holy Prophet (pbuh) visited the grave of his mother and cried near her grave and also made others around him to cry. Thereafter he said: I have taken permission from my Lord to visit the grave of my mother. You too should visit the graves because such a visit will remind you of your death.” (Reported in Sahih Muslim)

Not only the Prophet (pbuh) but also his wife Hazrat Aisha would visit the graves of great figures of Islam, like Hazrat Amina the Prophet’s mother and Hamza ibn `Abd al-Muttalib, the Prophet’s uncle who was martyred in early Islamic period. Prophet’s daughter Hazrat Fatimah (r.a) used to visit the grave of her uncle every Friday and she would pray and cry there. (Narrated by `Abd al-Razzaq, 3:572). Even she had marked the grave with a rock in order to recognize it (mentioned by al-Qurtubi in his Tafsir, 10:381).

Given this general Prophetic permission of grave-visiting, there is no reason why women cannot visit the graves or shrines of Sufi saints. In Islam, women are no less than men in any sphere of life. They equally deserve to acquire taqwa (piety and righteousness) and Tazkeer-E-Akhirat (remembrance of Hereafter), which are the core objectives of grave-visitation in Islam. Only men are not to be blessed with the spiritual influences of remembering the Hereafter. This is a line of exclusivist and patriarchal thinking. Women equally need to be God-conscious and mindful of the Akihrat (Hereafter). Therefore, the Prophet’s general permission to visit the graves should be taken in an inclusive and broader sense.

A Regular Columnist For Newageislam.Com, Ghulam Rasool Dehlvi Is Scholar Of Comparative Religion.