We are approaching the 2014 date for withdrawal of US troops from Afghanistan. Now, finally, a clear majority of people in the US think that the Afghan war was a mistake. So, I am wondering if there will be much re-telling and misuse, again, of the discourse of women's rights as a justification both for the initial war, and, possibly as a justification for an incomplete withdrawal.

The lead up to the Afghan war in post-9/11 used the rhetoric of "women's rights" to mobilise the American public. We were supposed to save their women from the Taliban and their "backward ways". Laura Bush used the language of women's rights to wrap the bombs of war with supposed democratic purpose. But not then, or now, should women's rights ever be launched in the name of imperial democracy. 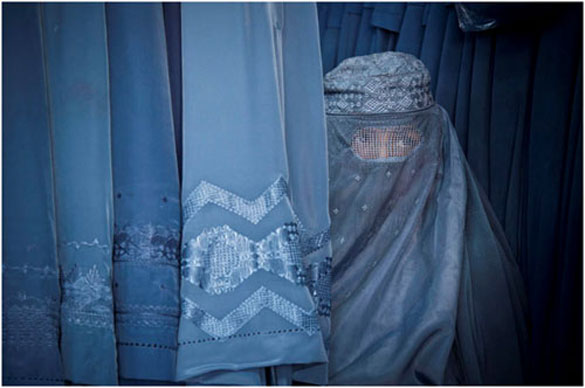 Many Afghan women have been activists on their own behalf long before the US invaded, says Eisenstein [AP]

Many anti-imperial feminists in the US mobilised against the initial rollout for war by the Bush administration with its misuse of women's rights as justification. US bombs were wrapped in the defence of "women's rights" - even though these bombs killed men and women alike.

It is important to pause and to remember the misuse of women's rights as a US strategy to mobilise for the Afghan war in the first place. So I was troubled by the New York Times a few days ago choosing to highlight on their front page: "Despite West's Efforts, Afghan Youths Cling to Traditional Ways". Actually, the discussion is about male youths and their continued embrace of misogynist practices and beliefs. The young men are recounting what they expect of/for their mothers, sisters and wives.

Afghanistan is labelled a patriarchal society because of Islam, rather than also because of its history of war and militarism. As for thinking that the "west "corrupts traditional culture(s), well, yes, it often does. The fear is expressed when one male youth says: "If my sister dressed like that, I would kill her." On the other hand, the women's rights legislation that many Afghan men reject and is also seen as corrupting would establish protections that are not yet institutionalised against child marriage, polygamy and violence against women

This is more than messy: Islam is not congruent with women's oppression, and hardly a singular example of it. Yet, right-wing aspects of it allow "western" women's rights discourse a specific entry site and should not simply be reduced to imperial interests.

Instead of recognising the deep connection between war, militarism and misogyny, Afghans are labelled simply as traditionalist patriarchs. The Taliban and radical Islamist zealots have been abusive and punishing of Afghan women. But little is simple here. Many Afghan feminists believe in the democratic promissory within Islam as it is articulated by women themselves. And, we should at least remember our own dirty little misogynist secret - the US armed services' epidemic of sexual harassment and sexual violence.

Global misogyny has its many aspects. In Afghanistan it is often a deadly mix between right-wing Talibanisation and imperial war. Yifat Susskind of MADRE, which sponsors local women's actions in Afghanistan, said in a correspondence to me concerning the New York Times article:

"There is no recognition whatsoever that tethering women's rights to US militarism is a sure-fire way to turn people against women's rights. There is zero understanding of the fact that sustained (as opposed to easily-rolled back) progressive change needs to be steeped in an environment of peace.

"War only shuts down the spaces for women's rights. They quote Amina Mustaqim Jawid, the director of the Afghan Women's Coalition against Corruption, but still can't see her point: 'These young men grew up in a war environment. They don't know about their own rights; how can we expect them to know about their sisters' rights, their mothers' rights or their wives' rights?'"

There is a complex set of realities for women in Afghanistan. Poverty is overwhelming and getting an education a constant struggle. Afghan women continue to suffer poor nutrition, lack of education, prenatal and preventative health care, and suffer the highest infant mortality rate in the world. Any women's rights agenda must first address these issues that are part and parcel with a ruined war economy and a devastated countryside.

Nevertheless, many Afghan women also have been activists on their own behalf long before the US invaded. They have been determined to fight for their rights - to their bodies and their minds, as they understand this in a myriad of ways. The constraining blue burqais/was an attempt by conservative forces to curtail their incredible determined resistance.

Many Afghan women activists say they are tired of being saved by others. The Russians, the Taliban and now the US government have all claimed women's "protection" as their agenda, to only soon forget or redefine this determination and turn it towards their own use. And for Afghan women, like others elsewhere, there is a huge difference between "protection" and "equality".

This is not to erase the horrific problems that many girls and women face in Afghanistan, but rather to say that the US war on Afghanistan has been as deadly and troublesome to them as is the Taliban. The US has a horrific record of supporting the Taliban during earlier periods of Afghan history, and continuing to negotiate with them during US occupation with little attention to women's rights, despite Hillary Clinton's promises.

The often-used equation between women's rights and the "West" confuses a needed women's agenda. Women's rights are then negated on the linkage with imperial ends and it makes it all too easy to reject US imperialism and the awful war we levelled as one and the same as democracy for women. And, women's rights US-style will not necessarily be the same as Afghan feminist beliefs. Anti-militarism is a necessity of any Afghan women's agenda, but what "peace" will look like for women "rights" and "equality" is to be determined by Afghan feminists on the ground.

I want to emphasise just how utterly important it is to see the fanatic assault on women's rights - no matter where it occurs - as completely antithetical to any expression of democratic living. I am reminded of the Right Wing of the Republican party in the US as it hammers away at women's rights to their bodies - whether it be contraception or abortion - with no regard for our wellbeing. The New York Times piece speaks of tribal justice in Afghanistan, but some of this "tribal" justice sounds not all that different than pockets in Mississippi, Wisconsin, North Carolina, Texas and Florida in the US.

It is important to be critical of the US for its imperial wars while recognising that women's rights are not a Western plot; nor are rights simply of the "west". Women from across the globe demand their rights in their own form, and in other than western ways. Women's rights, however feminists across the globe choose to define them, are always subversive of misogyny, especially in its imperial forms.

Women in the US must look to Afghan women to expand the meanings of democracy beyond its "western" forms. This is next on the agenda for democracy across the globe, alongside the full withdrawal of US interests in Afghanistan.

Zillah Eisenstein has written feminist theory in North America for the past thirty years. She is an internationally renowned writer and activist and Distinguished Scholar of Anti-Racist Feminist Political Theory at Ithaca College, Ithaca, New York.